Langjaw Gam Seng, 35, and Dumdaw Nawng Lat, 65, who had guided journalists reporting on Burmese airstrikes that allegedly severely damaged a Catholic church, were last seen on 24 December ll2016 traveling to a military base.

The disappearances raise grave concerns for the safety of the two men and witnesses to the incident, the two organisations said. The Burmese government and military should immediately address these issues and allow the visiting United Nations human rights expert to visit the area.

“The apparent enforced disappearance of these two Christian leaders has created a climate of fear and terror in Northern Shan state,” said Matthew Smith, chief executive officer of Fortify Rights. “The government should urgently investigate and report on this case and ensure protection for those with information.”

On 24 December 2016 at about 5:30pm., Langjaw Gam Seng, a youth leader with the Kachin Baptist Convention (KBC) in Mong Ko, reportedly received a phone call from a person representing himself as a member of the Burmese military.

The caller requested that Langjaw Gam Seng and his cousin Dumdaw Nawng Lat, an assistant pastor with the KBC, go to the Byuha Gon military base in Northern Shan State’s Mong Ko town, in Muse Township near the Myanmar-China border, to assist with the release of civilians detained there.

Local residents last saw the two men that evening traveling by motorbike towards Byuha Gon base, where Burmese Army Battalions Nos. 99 and 55 are located.

On 3 January 2017, representatives of the KBC and family members filed a missing persons report at Myo Ma police station in Muse Township. The KBC’s repeated inquiries to local government authorities have failed to elicit any information on the whereabouts of Langjaw Gam Seng and Dumdaw Nawng Lat.

The government has subsequently denied that the military detained the two men. On 10 January, presidential spokesperson Zaw Htay stated, “According to our ground report, they were taken by the Kachin Independence Army, not the military.” However, he provided no further information to substantiate that claim or the basis for his assertion.

“The nature of the two men’s disappearance means the military has some serious questions to answer,” said Phil Robertson, deputy Asia director at Human Rights Watch. “This is a crucial case for Aung San Suu Kyi and other government leaders to demand cooperation from the army, which has continued to resist civilian authority.”

Prior to their disappearance, Langjaw Gam Seng and Dumdaw Nawng Lat helped journalists document the destruction of civilian structures in Mong Ko during clashes in November and December 2016 between the Burmese military and the Brotherhood of the Northern Alliance (BNA), a coalition of four ethnic armed groups.

On 3 December 2016, a journalist with The Irrawaddy, with the assistance of the two religious leaders, photographed serious damage to the St. Francis Xavier Catholic Church in Mong Ko after it had allegedly been bombed by Burmese military airstrikes.

The journalist reported that the Mong Ko township administrator subsequently contacted him and asked him not to publish the photographs of the church. However, the photographs surfaced on the internet several days later.

On 18 December 2016, the Burmese defence ministry issued a statement denying allegations that military airstrikes were responsible for the damage to the church, saying it was “fabricated news”. The ministry instead claimed that “the rebels” had hidden explosives and ammunition in the church.

Catholic Bishop Philip Za Hawng then published a letter stating that the Burmese military called members of the church to their outpost on 8 December and claimed responsibility for the bombing, agreeing to rebuild the church.

Bishop Za Hawng described the church as “badly destroyed by bombs…when the government military planes carried out several sorties of airstrikes” and rejected the defence ministry’s suggestion that the damage was due to weapons “stored up” in the church, fearing the public might believe the church is “collaborating” with “the rebels”.

Yanghee Lee, the United Nations Special Rapporteur on human rights in Myanmar, who has been on a 12-day monitoring mission to the country, has been denied access by the government to conflict-affected areas of Shan state.

Human Rights Watch and Fortify Rights called on the government to grant Lee and other human rights monitors unfettered access to Shan state and all other conflict-affected areas.

Under international law, an enforced disappearance occurs when state officials or agents arrest or detain someone and refuse to acknowledge the deprivation of liberty or conceal their fate or whereabouts, placing them outside the protection of the law.

Enforced disappearances violate various rights protected under international law, including prohibitions against arbitrary arrest and detention; torture and other cruel, inhuman, or degrading treatment; and extrajudicial execution. The authorities have a legal obligation to investigate alleged enforced disappearances and fully and fairly prosecute those responsible.

Armed conflict in Kachin and Shan states has intensified since June 2011.

The Burmese government reported that 10 civilians died in the attacks, but that could not be confirmed. The BNA seized the town of Mong Ko for several days before the military drove them out in early December with airstrikes from helicopter gunships and warplanes as well as heavy artillery.

For many years, Kachin and Shan civil society organisations have documented unlawful killings, torture, rape, forced labour, and other abuses committed by Burmese military forces against civilians in Northern Shan and Kachin states.

In 2014, Fortify Rights documented the systematic use of torture and other cruel, inhuman, and degrading treatment or punishment of more than 60 civilians by government forces during fighting in northern Myanmar from June 2011 to April 2014.

On 20 January 2015, the bodies of two female teachers with the Kachin Baptist Convention—Maran Lu Ra, 19, and Tangbau Khawn Nan Tsin, 20 —were discovered in a room they shared in Kaungkha village, Northern Shan State.

The Burmese military subsequently threatened legal action against anyone alleging that the military was involved in the killings.

A report issued by the Kachin Women’s Association Thailand and Legal Aid Network in January 2016 contended the women’s bodies showed signs of torture and sexual violence, implicating the army’s Light Infantry Regiment No. 503 in the killings.

No one is known to have been arrested or prosecuted for the killings. “Perpetrators of grievous abuses in Kachin and Shan States need to be brought to justice,” Robertson said. “Atrocities won’t stop so long as the military can commit them against civilians with impunity.” 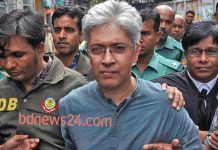