The UN Human Rights Office for South East Asia (OHCHR) said today it was concerned by the entry into force in Malaysia of the National Security Council (NSC) Act which gives the prime minister sweeping security powers and could restrict civil liberties.

The Act, which comes into effect on 1 August, establishes a National Security Council to handle matters related to national security and will be headed by Prime Minister Najib Razak.

Through the Act, the prime minister will have the power to declare, upon the advice of the NSC, a “security area”, defined as being a location “seriously disturbed or threatened by any person, matter or thing which causes or is likely to cause serious harm to the people of Malaysia, or serious harm to the territories, economy, national key infrastructure of Malaysia or any other interest of Malaysia”.

The declaration is valid for up to six months, and can be renewed an infinite number of times.

Forces operating in a “security area” will be given sweeping powers, including the capability to arrest and search persons, enter and search premises, and seize property without a warrant. Furthermore, they will be allowed to use force against persons, including force amounting to death, as they deem reasonable and necessary in the circumstances “to preserve national security”.

Moreover, the Act grants immunity to members of security forces and personnel of other government entities for their acts in any “security area”.

Meillan expressed concern that the Act could also be used to impose unjust restrictions on freedom of opinion and expression and freedom of assembly. “We call on the government to revise the Act to bring it in line with international human rights norms and standards. Furthermore, we encourage the Government to allow for an open and transparent consultation process on the provisions in the Act with all relevant stakeholders,” he said. 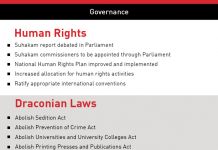 Every act of evil has a payback period but in a greater quantum… the law of karma… We all will witness the dharma (the law of justice) when the time comes.

No one seems to has the power to prevent the NSC act to be implemented & morever, it is very obvious that once implemented desperately, action would be in play & whatever contain in the act are not specifically define & very flimsy & could be fancy to the terms of those who control the NSC. Very sad that with all existing acts & laws, it has come this situation where abuses are just at the tips of their fingers.