Malaysia should cease using the Official Secrets Act to intimidate and persecute those demanding the government take responsibility for its actions, says Phil Robertson.

It’s shocking that the Malaysia government is prosecuting Rafizi Ramli for revealing a page of this year’s Auditor General’s report, which contains information on government performance that should be made publicly available and debated in Parliament rather than locked away under the Official Secrets Act.

By criminalising Rafizi’s act, the Malaysia government is putting another nail in the coffin of government transparency and accountability, and clearly violating his Rafizi’s rights.

Malaysia needs to revise the Official Secrets Act to bring in into compliance with international human rights standards, and cease using this law to intimidate and persecute those demanding the government take responsibility for its actions.

Phil Robertson is deputy director of the Asia division of Human Rights Watch.

‘Deep state’ lurking beneath the surface? 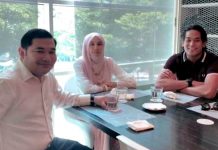 He as an elected representative in the democratic Parliament in a democratic society is merely exercising his duties & responsibilities to enhance the freedom of information, thereby supporting transparent and accountable institutions which is important to the rule of law. Freedom of information is an integral part of the fundamental right of freedom of expression, as recognized by Resolution 59 of the UN General Assembly adopted in 1946, as well as by Article 19 of the Universal Declaration of Human Rights (1948), which states that the fundamental right of freedom of expression encompasses the freedom “to seek, receive and impart information and ideas through any media and regardless of frontiers”.

Fighting for justice is serving the Almighty God. Religious leaders need to rethink the definition of serving their God .

Kudos!,you are a real fighter,willing to sacrifice yourself for the sake of truth and that very truth will set your conscience free knowingly that what you did is true and just.tq