Azrul Mohd Khalib, who initiated a petition change.org, shares his experience of being hauled up by police for investigation under the Sedition Act.

You might have heard that I was called in by the police [on 20 April 2016]. Let me share with you what happened.

I was asked to present myself at the Petaling Jaya IPD and met with ASP Lim Chee Koon and Sergeant Selvam from the Department of Criminal Investigations. I was fortunate to have the support of Lawyers for Liberty with Melissa Sasidaran, who acted as my lawyer. The taking down of my statement went smoothly. I was unharmed.

Many questions were asked including whether I own the Change.org site(!), if anything that was written is true(?), and if any of you were given or promised an incentive to support this petition(!!). I almost laughed hearing some of those questions.

Like you, many Malaysians are finding their voices and have started to speak out. Their voices express concern and worry for the state of the country today. They speak of concern for the damage that is being done to our country due to the alleged misconduct and a massive loss of integrity, trust and independence.

Citizens of a democratic country shouldn’t need permission to take part in the democratic process. People shouldn’t need to be looking over their shoulder, lowering their voices, worried about whether the government is going to be happy with what they want to say or express.

Especially if it is expressing concern about the way the country is being run, the misuse of public funds and the crushing burden of increasing economic disparity that is being felt by almost every citizen in our country.

Support the struggle to build a Malaysia based on Justice, Freedom, Solidarity:
READ MORE:  Why modern Malaysia must get rid of the colonial era Sedition Act

The Citizens’ Declaration is one form of democratic expression, and it is important and urgent to address the four issues highlighted in that document.

“Governments are like underwear. They start smelling pretty bad if you don’t change them once in a while.”

This one is long overdue, and the stink is more than we can bear.

But the need for change must come from Malaysians themselves.

We must not stay silent in the face of tyranny, corruption and dishonour to our country.

We must not stay silent when our liberties and freedoms are threatened.

When we voice our concern about the integrity of the government, it stems from the firm belief that there is a need for better governance, accountability and transparency from the people who are making decisions in the Rakyat’s name. In your name.

The online petition and the Citizens’ Declaration are certainly not seditious in any shape or form. This is what participatory democracy looks like. Something those in power for far too long have forgotten.

Those with the responsibility of governing must realise that taking criticism, even unwelcomed or unpleasant ones, is necessary especially if it is in the best interest of the country.

Unthinking and unquestioning obedience to those in governance is not what is needed.

We should not and cannot be silent. After all, we reap what we sow. Let’s all support reform and change for a better Malaysia.

Keep sharing the petition as widely as possible.

Watch this video of Mmusi Maimane of the South African Parliament and be struck by how familiar and close to home it sounds: 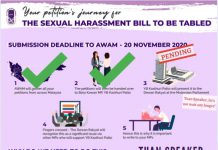