While the main US motivation for the Trans-Pacific Partnership (TPP) has been to counter China’s influence in the region, it has also been used to undermine the Doha ‘Development’ Round of trade negotiations to better advance politically influential US corporate interests.

Hence, it has become all the more necessary to legitimise the TPP in terms of its ostensible benefits.

Touted as a ‘gold standard’ 21st century trade deal, it is nonetheless necessary to ascertain what gains can really be expected and whether these exceed its costs.

The only US government study of the TPP’s likely impacts found very modest growth gains from tariff reductions of only 0.1% over a decade.

Instead, the Peterson Institute of International Economics (PIIE) has provided the fig-leaf for the empire’s new clothes with far more inflated projections of supposed gains. In 2012, it projected growth of 0.4% after a decade.

In January, the PIIE came up with greater gains from the TPP by claiming more, albeit still modest growth gains from trade, at 0.5% after 15 years.

If it used more conventional methods for estimating gains from trade, the benefits would have been much more modest, as in the US government study.

This is justified by the presumption that the TPP will place all participating countries in the top 10 per cent of the World Bank’s Doing Business ranking, despite ambiguous evidence of such effects.

The 2012 study arbitrarily assumed that every dollar of FDI within the TPP bloc would generate additional annual income of 33 cents, divided equally between source and host countries, without any theory, modelling procedure or empirical bases for these suppositions.

The huge gains claimed have little, if any, analytical bases in economics, evidence or experience.

To make the case for the TPP, the PIIE understates costs and risks, while exaggerating benefits.

Very diverse TPP provisions were fed into the trade model as simple cost reductions, with little consideration of downside risks and costs.

Although such costs and risks are not seriously considered, the projections are nonetheless presented as cost- benefit evaluations.

For example, provisions to strengthen, broaden and extend intellectual property rights (IPRs) become simple cost reductions that will increase the trade in services.

Such analysis ignores impacts on consumers or on governments subsidising the prices of medicines to patients.

Thus, the PIIE and World Bank studies greatly overstate benefits from the TPP. Tariff-related trade benefits are the only quantifiable benefits consistent with economic theory and evidence, but make up a very small share of the projected gains.

Many benefits involve one-time gains and do not raise the economies’ annual growth rates. Also, these gains need to be compared against the costs ignored by the study as well as the actual details of the final deal.

Even unadjusted, the gains are small relative to the GDPs of TPP partner economies. But even these gains are still modest, and need to be revised downwards as many assumptions made for these projections are not in the final deal.

While projected trade benefits will take time, not least because of the TPPA provisions, the major risks and costs will be more immediate.

Also, any impact of the TPP on workers’ incomes is excluded by assuming that all economies operate constantly with full employment while income distribution, trade and fiscal balances remain fixed over time.

If the paltry gains from the TPP mainly go to a few big businesses, with the losses borne by others – workers, consumers or taxpayers – the TPP would worsen inequality.

The TPP goes much further to redefine the role of government than necessary to facilitate trade. TPP ‘disciplines’ will significantly constrain the policy space needed for governments to accelerate economic development and to protect the public interest.

The dubious larger benefits projected by TPP advocates make it all the more critical to consider the nature and scale of costs and risks ignored by available modelling exercises.

The TPP will impose direct costs, eg by extending patents and by blocking generic production and imports.

The TPP’s investor-state dispute settlement (ISDS) provisions will enable foreign investors to sue a government in an offshore tribunal if they claim that new policy or regulations reduce expected future profits, even if such regulations are in the public interest.

As foreign investors are already well protected by other available means, ISDS provisions are completely unnecessary.

Even advocates of free trade and trade liberalisation have criticised the inclusion of such non-trade provisions in free trade agreements.

Instead of being the regional free trade agreement it is often portrayed as, the TPP seems to be “a managed trade regime that puts corporate interests first”.

Thus, the TPP, offering very modest quantifiable benefits from trade liberalisation at best, is really the thin edge of a wedge which will undermine the public interest in favour of powerful corporate interests.

Net gains for all in TPP countries are a myth. Only a full, careful and proper accounting based on the full text can determine who benefits and who loses.

Jomo Kwame Sundaram was an assistant secretary-general responsible for analysis of economics and development in the United Nations system during 2005-2015 and received the 2007 Wassily Leontief Prize for Advancing the Frontiers of Economic Thought.

The writing is on the wall for Mahiaddin 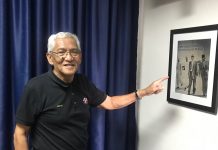 Arshad soldiers on with passion