The Centre for Independent Journalism (CIJ) is appalled at the most recent assault against the right to freedom of expression and information and its critical role in upholding democracy in Malaysia.

We refer to the proposal by Attorney General Mohamad Apandi Ali to increase the punishment under the already heavy-handed Official Secrets Act to include life imprisonment and 10 strokes of the rotan to target journalists.

This is an indicator of a government that is intolerant of criticism and fearful of accountability, and a case of shooting the messenger to distract from the real issue at hand, which is good governance and transparency in a working democracy. It is also signalling a government that is using all laws at its disposal to restrict and clamp down on our right to freedom of expression.

We wish to remind the attorney general that the right to freedom of speech and expression, enshrined under Article 10 of the Federal Constitution, includes as per Article 19 of the Universal Declaration of Human Rights, the “freedom to hold opinions without interference and to seek, receive and impart information and ideas through any media and regardless of frontiers.”

In short, it includes the right to information, or in more common language, the right to know. Any limitations to this right is by exception, and needs to be in pursuit of a legitimate aim and is both necessary and proportionate. We question if this most recent proposal meets this internationally accepted norm.

The reported leaks in recent times seem to be an indication of failed processes within the government to address issues of accountability and transparency, where civil servants feel they need to seek media intervention.

Protection of sources remains one of the strongest safeguards and principles for not just good journalism ethics, but as a pillar for the public’s right to know and to demand accountability from its government. It enables the media to play its critical role in exposing wrongdoing and to stimulate public debate on subjects that are paramount to public interest.

At this critical juncture of our nation’s democratic development, we urge the attorney general to restrain his compulsion to propose greater restrictions on our democratic rights and freedoms through heavy-handed laws that seem to be pushed through with little debate, but instead, to work on ways in which these rights can be defended. 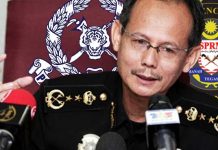 Of civil and conscientious servants 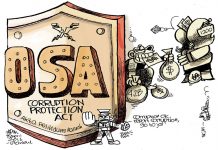 I THINK THIS GUY HAS A DICTATORSHIP IN MIND??

Was thinking of a worse name for this guy…clown is too nice..

This clown is destroying an already wounded nation. He should be removed and charged for insulting the country with unintelligent moves. Maybe, Journalists all over the country & across continents should consider boycotting reports on the country’s genuine affairs and let it head for oblivion. Stifling & sieving information is NOT reporting and reflective of poor journalism!