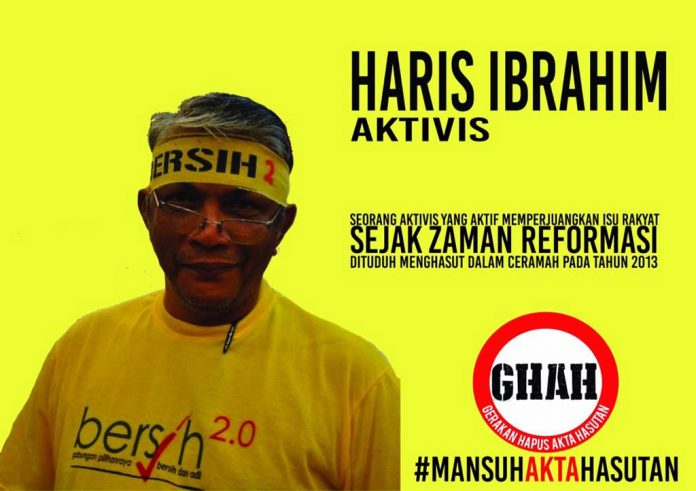 The conviction of prominent lawyer and human rights activist Haris Ibrahim of sedition highlights Malaysia’s increasing determination to crush any form of dissent in the country, Amnesty International said yesterday.

“(Yesterday’s) conviction of human rights activist Haris Ibrahim is the latest travesty in a series of politically motivated actions to silence dissent in Malaysia. The Malaysian government must halt its prosecution of human rights defenders who have called for peaceful protests and electoral reforms. If imprisoned, Amnesty International would consider Ibrahim a Prisoner of Conscience,” said Josef Benedict, Amnesty International’s Director of Campaigns for South-East Asia.

“This case demonstrates the importance of repealing Malaysia’s Sedition Act, a repressive law that has been used with impunity against government critics. Such laws have no place in a modern, rights-respecting society. The Malaysian government should repeal the Sedition Act, quash all convictions under it, and ensure stringent protections are in place for citizens to peacefully exercise their right to freedom of expression, association and peaceful assembly.”

Malaysian human rights activist Haris Ibrahim was convicted and sentenced to eight months imprisonment yesterday for speaking at a forum that was critical of the Malaysian government’s victory in the last general elections held in 2013.

Haris Ibrahim was one of the many individuals charged under the Sedition Act 1948 in May 2013 immediately after the last general elections, triggering an intensified wave of politically motivated prosecutions and the trend in imprisoning government critics.

In 2015 alone, at least 91 individuals were arrested, charged or investigated for sedition – almost five times as many as during the law’s first 50 years of existence.

In 2012, Prime Minister Najib Razak vowed to repeal the law, but the government has not only reneged on that promise but actually strengthened and widened the scope and application of the Sedition Act.

An amendment to the Act rushed through Parliament in April 2015 after less than a day’s debate added criticism of religion to the list of sedition offences, and reduced the discretion of judges in sentencing, requiring them to impose prison sentences of between three and seven years. It also brought electronic media and sharing on social media under the Act.

What is wrong with the people ? bring all this crap to an end and get the Country back in the right direction?