Even if the court later quashes the Home Ministry’s decision to suspend the paper’s publication permits, it will now be practically meaningless in view of the time that elapsed, says the The Edge Media Group.

We are disappointed and gravely concerned with the Court’s decision today in dismissing our application for a stay of the suspension of The Edge Weekly and The Edge Financial Daily because it effectively means that we will now be deprived of the full benefit of the remedy of judicial review which has been fixed for hearing on 7 September 2015.

Even if we were to subsequently succeed in quashing the decision to suspend our publication permits, it will now be practically meaningless because most if not all of the period of suspension would have elapsed.

We have always regarded and contended that our application for judicial review was to preserve the fundamental liberties of freedom of speech and expression which are guaranteed by the Malaysian Federal Constitution. Ours is not a money claim.

We, however, respect the decision of the Court and will not be appealing against it. Together with our lawyers, we will instead focus on preparing for the 7 September 2015 hearing of the judicial review of the Malaysian Home Ministry’s decision. 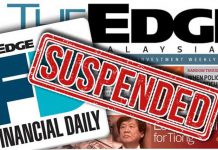 MTUC: Media clampdown not the way forward for a democratic society 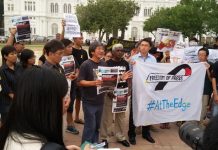 The Edge suspension, Pakatan Rakyat and striving to bring Justice 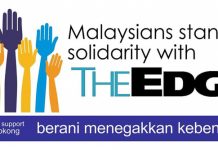