Suara Rakyat Malaysia (Suaram) strongly condemns the introduction of the National Security Council Bill and the attempt by the Barisan National to bulldoze the bill through Parliament.

While the government of Malaysia justified the bill as a necessary provision to safeguard national security, it is irrational to think that we need such a measure despite the absence of any large-scale conflict or threat on Malaysian soil. Even in the days of conflict with the communists and the confrontation with Indonesia, Malaysia had no need for such a draconian measure. Certainly, we do not need it now!

The only reason why the government of Malaysia wishes to implement this legislation is to provide its leaders with unparalleled power to control the country and silence all forms of dissent with violence and threats of violence.

If this bill was passed, it is likely that Malaysians today will stand witness to a killer blow against democracy in Malaysia! Rather than protecting Malaysia from the security threat of Islamic State terrorists and incidents like the Sulu invasion, the National Security Council Bill will become the real security threat to Malaysia’s national security and parliamentary democracy and set Malaysia on the path of tyranny!

Say no to the National Security Council Bill!

Rejection of emergency rule – a victory for parliamentary democracy! 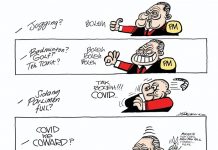 Democracy must not fall victim to Covid-19