Thomas Jalong and Ramould Siew urge the government to recognise native customary rights by withdrawing their appeal to the Federal Court and gazetting the Dayak communities territorial domains.

The TR Sandah’s case was filed in the High Court of Borneo in 2009 with regard to encroachment by Kanowit Timber Sdn Bhd.

The High Court recognised NCR to include temuda, Pulau Galau and Pemakai Menoa as a whole. The total area claimed was 5500 hectares. The decision was upheld by the Court of Appeal in 2013.

The state government of Sarawak appealed the case to the Federal Court on the basis that the customary concept and practice over Pemakai Menoa and Pulau Galau has ‘no force of law’.

The indigenous communities have practised and exercised their adat in their respective territorial domains (Pemakai Menoa) for many generations and have managed and utilised the resources to sustain their way of life, culture and livelihood strategies.

Encroachment into the communities’ territorial domain has been prevalent. The TR Sandah case is an example where the community had to bring the case to arbitration, and there are more than 200 cases in Sarawak waiting for trial or judgment.

Support the struggle to build a Malaysia based on Justice, Freedom, Solidarity:
READ MORE:  Why customary land rights matter to the Orang Asli

These encroachments have benefited and will continue to benefit only a few but have caused widespread and indiscriminate destruction of resources with ease and impunity and adversely affect the lives and livelihood of the affected communities. Such encroachments have also generated disputes and conflicts between the communities, companies and the government.

The government and its leaders have the obligation to respect, protect and fulfil the rights of the indigenous people to exercise their customary practice especially with regard to their lands, territories and resources. By respect, the state must refrain from interfering in the established adat of the indigenous peoples. The claim to territorial domain is recognised under the adat and is thus a right.

The state also must ensure that it protects the rights against any abuses. Issuing of provisional lease and licence in Indigenous People’s territorial domain contradicts the obligation and reflects lack of respect.

The state must also fulfil its obligation by formulating positive policies, steps and actions to facilitate the enjoyment of the rights.

To fulfil these obligations, we urge the government to recognise the customary rights to Pemakai Menoa and Pulau Galau by withdrawing their appeal to the Federal Court and gazetting the Dayak communities territorial domains.

We also need to clarify here that the people that attended the gathering during the Federal Court hearing on 9 September transcend political ideologies. Those who attended and were present at the court include both BN and PR supporters who see the case as very important to them, their rights and their future.

This is contrary to the statement by Abdul Karim Hamzah, the Assistant Minister for Social Development, that the participants are being instigated by the opposition. The statement aimed to demonise and intimidate the people from supporting and seeing the importance of the outcome of the case.

The huge crowd should be seen as a strong signal to the government of the Sarawak natives’ or indigenous people’s growing concern and awareness of their rights on matters that affect their lives.

We urge the state government, especially the Dayak ministers and leaders to take responsibility and look into the rights of the Indigenous Peoples of Sarawak and take concrete and effective action to protect the native customary lands of the indigenous communities in Sarawak. 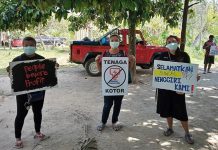 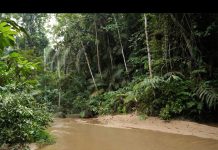