No central bank governor will be doing his (or her) duty if he (she) does not raise the red flag early so as to prevent undesirable economic crises from happening, says Zarinah Yusof.

Persatuan Ekonomi Malaysia (PEM) or the Malaysian Economic Association (MEA) was established 50 years ago as a national association with its office based at the University of Malaya, for the purpose of popularising the study of economics among the academia and the public and for encouraging open discussion on economic issues that affect the country and the people.

Taking a stand on issues of public interest is vital to playing this role.

Today, we wish to bring up into the public arena our considered professional views regarding the need to maintain the integrity and independence of Bank Negara Malaysia (BNM), one of the earliest institutions to be established at the time of Merdeka in 1957. This is because the nation’s founding fathers had wisely envisaged that the country’s continued prosperity as a free country depended crucially on the capable management of its financial system.

A viable financial system requires a strong autonomous central bank. Thus, from the earliest days, Bank Negara Malaysia was established with independent powers for the governor on monetary policy, in line with the practice in all Commonwealth countries, whose central banking legislations were used as a model for Malaya.

The legislation was subsequently updated and revised with additional regulatory powers given to BNM, especially after the East Asia financial crisis of 1997/98, which saw the collapse of several banks, and with liquidity drying up, the entire economy was dragged down.

Several improvements were made on the recommendations of the task force set up to do a financial sector study.

The study recommended urgent measures to create a resilient system.

This included strengthening the capitalisation of the banks and financial institutions and their governance practices.

Most important, checks and balances were put in place to prevent irresponsible decisions being made that could bring down not only particular institutions but also the entire financial sector.

The result of the restructuring carried out by BNM is that the country’s banks remain strong to support economic growth, despite the decline in oil and commodity prices, volatility in the world economy, controversy over 1MDB, and the ongoing political tensions in the country.

PEM is concerned that lately, questions are being raised about the independence of BNM and its governor.

We would like to strongly advise that actions and words of this nature should stop, as they are likely to create the impression that BNM is in danger of losing its powers or that its governor will no longer be independent, unlike all the other central bank governors in the world.

Should such an impression persist and gain traction, it will lead to an erosion of confidence among investors and the international community, with negative consequences on the integrity of our banking and financial system, leading to serious implications for the economy.

Central bank autonomy does not mean that BNM operates in isolation of the government and society.

Its governor, whether here or elsewhere, knows that while the law is clear on its independence, the central bankss role in conducting monetary policy and enforcing its regulatory functions must be coordinated closely with government.

This is because fiscal policies made in the annual budget have a direct effect on monetary aggregates, inflation and interest rates.

This is the reason why it is common to see governors of central banks briefing their congress or parliament on how they view the economic situation in the country, what they feel about certain government policies on tax or expenditure, and especially on wasteful expenditure.

A budget that creates concerns on the capacity of government spending will cause the financial and capital markets to worry about inflation and increasing interest rates. Worries often translate into realities.

No central bank governor will be doing his (or her) duty if he (she) does not raise the red flag early so as to prevent undesirable economic crises from happening.

We in Malaysia must learn from the unfortunate financial crises and the breakdown of governance in other countries to understand that it is important for our public institutions like BNM, the judiciary, the attorney general’s chambers, the Malaysian Anti-Corruption Commission (MACC), and the police to be fully empowered in the administration of law and order in the country.

Malaysia must adhere to the highest standards of governance that is so important in creating trust and confidence in our system of administration.

This is the principle of separation of powers that is the foundation of working democracies.

These principles ensure that Malaysia can become among the best managed countries in the world.

As Malaysia aspires to be a fully developed country by 2020, its governance system must also be among the best.

Since its early days, BNM has worked closely with other central agencies in the government, the Economic Planning Unit and the Ministry of Finance, as well as other operating ministries and departments.

Working in concert, they provide the necessary input into the national planning and budgeting process and solve important policy issues that affect the country’s development. Like other central banks, it uses its independence and expert knowledge of the financial system for the national good.

Therefore, Malaysians must continue to respect its vital role in the economy, which it can only perform if its independence and autonomy are preserved. 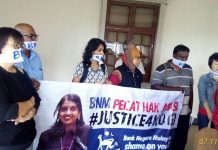 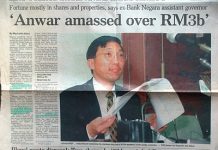