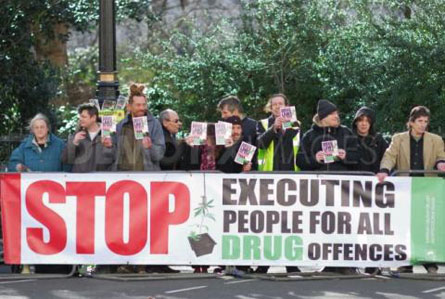 Madpet urges that provisions be included to allow the court to review the death sentence of all those currently on death row.

Malaysians Against Death Penalty and Torture (Madpet) is happy to note that Nancy Shukri, Minister in the Prime Minister’s Department and also de facto Law Minister, was reported as stating that the proposal to amend laws to abolish the mandatory death sentence may be tabled in Parliament as early as March next year (Malay Mail, 17 November 2015).

The Malaysian government has since 2010 announced its willingness to relook at the mandatory death penalty, with a view to its possible abolition or the reintroduction of a discretionary death penalty, and finally in 2016 we may see this becoming reality.

Last week, Attorney-General Apandi Ali also did commit to propose to the Cabinet that the mandatory death penalty be scrapped (Malaysian Insider, 13 November 2015). Appandi Ali, who is also the public prosecutor, said that “mandatory death sentences were a ‘paradox’, as it robbed judges of their discretion to impose sentences on convicted criminals”.

There are currently 1,022 persons on death row, based on the government’s written reply to MP M Kulasegaran dated 3 November 2015. The reply also stated that from 1998 till 6 October 2015, 33 persons were executed in Malaysia.

It is not clear as to how many people have been executed, if any, after 18 December 2007, the date the United Nations General Assembly adopted a resolution calling for “a moratorium on executions” pending abolition.

On 18 December 2014, the UN General Assembly (UNGA) reaffirmed for the fifth time since 2007 the call for a stop to all executions. In 2014, 117 nation States voted in favour, 38 against, 34 abstention with four absentees. Every time the resolution had been adopted, the number of votes in favour has been increasing. The global trend continues to be for abolition.

Support the struggle to build a Malaysia based on Justice, Freedom, Solidarity:
READ MORE:  Death penalty abolition: How the BN, PH-plus and BN-PN-GPS fared

Being a member of the United Nations, Madpet hopes that Malaysia has been in compliance with this UN General Assembly Resolution and there have been no executions for many years.

The call for the abolition of the death penalty in Malaysia has been made by many individuals, bodies and civil society organisations including the Malaysian Human Rights Commission (Suhakam), the Malaysian Bar and Madpet.

In tabling the amendments that will bring about an end to the mandatory death penalty, Madpet urges that provisions be included to allow the court to review the death sentence of all those currently on death row by reason that the offence under which they were convicted carried the mandatory death penalty. Alternatively, all their sentences could be commuted to life imprisonment or imprisonment until the end of their natural life.

Madpet appreciates this first step and calls on Malaysia to abolish the death penalty.

Madpet also calls for a moratorium on all executions pending abolition.

Madpet also calls on Malaysia to urge Asean to abolish the death penalty.