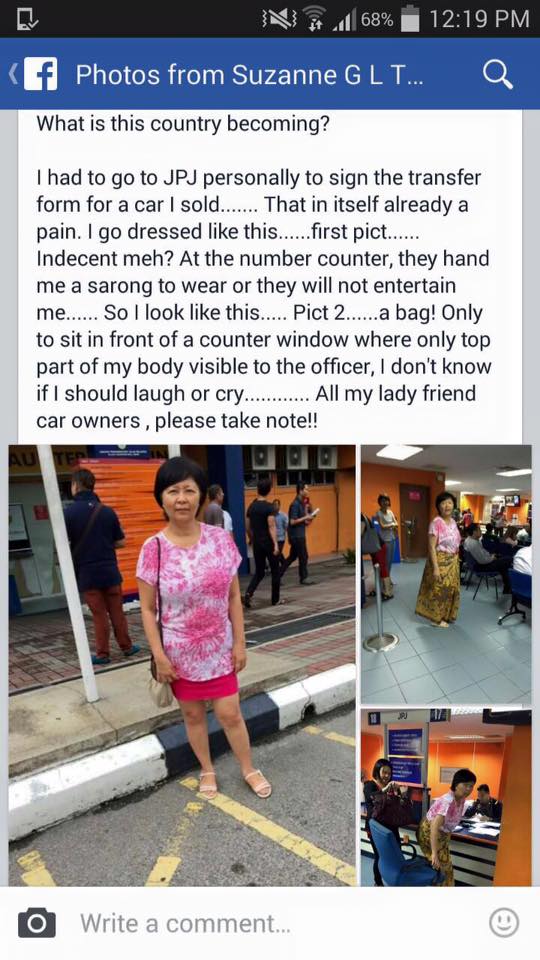 The Joint Action Group for Gender Equality (Jag) expresses shock at the treatment of a woman who was refused service at a Road Transport Department (RTD) office for allegedly dressing in a manner which was too ‘revealing’.

The action of the officers at the RTD office in refusing to provide service and forcing her to wear a sarong was both unwarranted and unprofessional. Such mistreatment is reflective of the growing conservatism in Malaysia which seeks to police the dressing and behaviour of ordinary Malaysians.

While it is acceptable to have a dress code for religious houses such as mosques or temples, the government, on the other hand, has no place in adopting such stringent dress codes. What effect does the implementation of a rigid dress code have on the daily operations of an RTD office? How will it improve or disrupt the services of an RTD office?

It is important to note that nothing in the RTD’s Client Charter even mentions the dressing of customers. Wouldn’t the personnel in government office, in this case the RTD office, be better served focusing on improving the service provided to its customers rather than judging their clients and attempting to strictly enforce a dress code?

The obsession with implementing a dress code is based on the assumption that Malaysians are unable to choose their own attire without regulation and policing. Again, women are being victimised for how they dress – this time by being denied access to government services.

Jag is concerned that the implementation of a dress code has the risk of being another form of oppression and abuse by government officers to deny services, especially to female customers.

We call on the RTD to prioritise upholding their promise of “friendly, efficient and transparent” service as found within their own Client Charter rather than indulging in pointless policing.

Jag hopes the government will end this unnecessary moral policing by removing stringent dress codes, especially one that is tied to narrow and arbitrary definitions of modesty.

Endorsed by the Joint Action for Gender Equality (Jag):

I find it hypocrite to police dressing . It is the exposure of Knees that is causing hallucinations why in hot climate even if male wear shorts and collar t shirt and is wearing shoes neatly tied is not welcome ‘ where revenue is being collected this kind of things are absurd.