As a policy, the GST is regressive as it shifts the burden of tax from the haves to the have-nots, writes Rani Rasiah.

The PSM condemns the rubber stamping of the GST bill by Parliament with an unconvincing vote of 119 to 81.

A decent government should withdraw the bill at least for now and work on getting a more credible outcome. For the figures do not only reflect the partisan voting trend in parliament, with 119 BN MPs in favour and 81 opposition MPs against the bill. The truth is that it more than reflects the situation on the ground where more than half of Malaysians are unaware of the actual implications of the GST.

The government may claim that it has consulted the people, but what is its idea of consultation? Bombarding people day and night for a length of time and then going on to vote on the bill without getting feedback is not consultation. It is not even education as the propaganda material misleads by lying, giving half-truths and glossing over the GST. One leaflet shows cartoon figures in a restaurant cheering the introduction of the GST!

The GST is a tax on consumers, rich and poor, employed and unemployed. The philosophy behind it is that it is only fair that all citizens pay taxes – even if the playing field is not level. The government, in giving out BR1M, has acknowledged that 80 per cent of Malaysian families need help to cope with living costs. What then is the logic in hitting them with a tax they can ill afford?

The government’s justification for implementing the GST is that 160 countries have implemented it, and that it will make Malaysia more competitive by attracting FDI. It is an argument that the poorer half of Malaysians cannot connect with.

Policies formulated with the goal of attracting FDI have scarcely benefited the people. Living and working conditions for more than half the Malaysian population have actually deteriorated after Malaysia’s adoption of neoliberal policies.

Privatisation of what should be non-business goods such as electricity and telecommunications and education and health care, promised efficiency and cost reduction but in truth have pushed prices up. Left to market forces, housing is now out of the reach of blue collar workers.

Wages meanwhile remain stagnant and unrealistically low; job security and bargaining power are at an all-time low thanks to the indiscriminate import of migrant workers. The workday has gone back to 12 hours. What’s the case for another assault?

The government has given the assurance that a third of goods will be GST-exempted and another third zero-rated, and that the GST will be imposed on only a third of goods and services. How long will this formula last? Remember how subsidies were withdrawn, not because workers’ incomes have risen to meet living costs – but on the grounds that we have been subsidised for too long? The GST rate of 6 per cent can go up too, as has happened elsewhere.

The passing of the GST is a step backwards in the lives of ordinary Malaysians simply because it will further diminish household income. As a policy, it is regressive as it shifts the burden of tax from the haves to the have-nots. Company taxes will be lowered and the GST will be introduced to make up for the drop in revenue.

The PSM opposes the manner in which the GST Act has been pushed through and calls for protests against it. Withdraw the GST!

Rani Rasiah, an Aliran member, is a central committee member of of Parti Sosialis Malaysia. 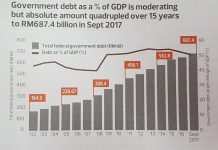 Five reasons why Malaysia’s rising debt should concern us

I have been advising the people that GST will affect everyone, rich and poor alike no exception. It is also the only desperate solution to the dire financial situation Malaysia is in. No doubt everyone knows that it is brought about by the Umno schmucks. It was brought about by egregious Mahathir with the implementation of all the white elephants or all the mega projects in the country …
He was not concerned to ensure that 30% of the country’s wealth is owned by the Malays as provided in the legislation… (and) if the country’s Malays get to share the nation’s wealth. … he reluctantly ‘retired’ but did he ? He is more pro active in politics than when he was as PM ! The sad thing is he was wrong when he thought he was able to decide on the policies that would be implemented even after his ‘retirement’ !