Contrary to what Lynas has claimed, it has failed to carry out what it promised, claim Save Malaysia Stop Lynas (SMSL) and Pertubuhan Solidariti Hujau Kuantan (PSHK)

In its Cash Flow report, the quarter ended with a deficit of $A23.775m while its previous quarter had a cash reserve of $A23.359m! It raised $A39.971m from a rights issue exercise and institutional placement of shares last May. It now has a cash balance of $A38.144m, while the next quarter has a forecast outflow of $A58.172m! This does not include the next principal repayment due under the Sojitz Facility of US$35.0m on 30 September 2014!

Though the quarter saw a production of 1,882 tonnes of REO, Lynas only sold 1,630 tonnes and grossed in A$26.495m which is equivalent to a basket price of A$16.254/kg. It is much lower than basket price of US$20.35/kg during the quarter on a China domestic basis. What this means is LAMP is operating on a loss accumulating basis. The market price for REO is continuing to experience a downtrend and this will further exacerbate Lynas’ losses through a full operation ramp up as announced!

It is now clear that Lynas’ financial health is in ‘ICU’! Should it fail to get their creditor Sojitz/LOGMAC to agree to defer their repayments of A$215m in six-monthly intervals till 31 March 2016, it will begin to default on their repayments starting 30 September this year and this could lead to dire and serious implications for the community here! With the meagre sum of US$13.05m received as security deposits, would it be sufficient to dispose of thousands of tonnes of solid radioactive wastes left behind by Lamp safely?

The government of Malaysia and the regulating authority, AELB, should exercise the Principle of Caution and reject Lynas’ application for the Full Operating Stage Licence (renewal of TOL)!

In its activities report ending 30 June 2014, Lynas revealed that it had submitted all documents required for the application for a Full Operating Stage License (FOSL) for Lamp to the AELB. It had also made an e-application as well and submitted a letter of intent to that effect. Lynas claimed that it had complied with all regulatory requirements and ALL conditions of the TOL since it was issued by the AELB in September 2012. (Source: Quarterly report ending 30 June 2014)

The residents of Kuantan and Balok hereby request the AELB to confirm:

The residents are gravely concerned that both Lynas and the regulatory authority have not been fulfilling their pledge to inform and engage the local residents and communities on these matters. It is part of the IAEA recommendations that both Lynas and AELB should adhere to as a precondition to the issuance of TOL.

Lynas claimed that WLP waste will be recycled as road base material and the AELB has certified it as non-radioactive. We would like both Lynas and the AELB to provide us with a sample so that independent experts can have a say over this.

Meanwhile, we urge the DOE NOT to approve the proposal from Lynas for the construction of a demonstration and assessment road using this material! Lynas should have done this before it built its plant here. Why should our land and environment be the experimental laboratory for Lynas’ radioactive waste?

So is the claim by Lynas on the commercialisation of NUF wastes. We demand that all information regarding the customer and the trials that had been carried out be made available to the public so that a fair and independent opinion can be sought from the experts to appease the fears and concern of the people.

Contrary to what Lynas has claimed in their report regarding the fulfillment of ALL conditions under the TOL, it has failed to carry out what it promised in its written undertaking. AELB should under no reasonable circumstances allow the application for the Full Operating Stage Licence (FOSL) to be approved!

We as stakeholders have been bypassed and ignored when Lamp was built. We promise that we will not let this matter rest if proper observation of rules and regulations both by Lynas and the regulating authorities are not adhered to. We shall pursue through whatever means necessary to ensure that our environment is not sacrificed on the altar of foreign profits and the incompetence of our government officials! 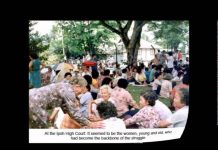 ♥ 🙂 😉 ANYTHING THAT IS LESS THAN 1.25 Bq/g IN THE EU OR 1.20 Bq/g IN THE USA, IS CONSIDERED TO BE SAFE ENOUGH TO BE EATEN. If Lynas did not separate out their “waste” into 3 components i.e. WLP, FGD and NUF, the Lynas “waste” would have a specific activity of only 1.35 Bq/g . This is only marginally above the “safe to eat” level in the EU and the USA of 1.25 Bq/g and 1.2 Bq/g respectively. AND IF WE ADD AN EQUAL AMOUNT OF MALAYSIAN SOIL TO THE ABOVE NON-SEPARATED “WASTE” THE ACTIVITY IS ONLY = 0.72 Bq/g . THIS IS WELL WITHIN THE SAFE LIMIT FOR HUMAN CONSUMPTION (IF EDIBLE) IN BOTH THE EU AND THE USA ! ! ! SO WHAT’S SO DANGEROUS ABOUT THE LYNAS WASTE ? IT CAN BE SAFELY EATEN (IF EDIBLE) FROM A RADIATION POINT OF VIEW WHEN BLENDED WITH AN EQUAL AMOUNT OF MALAYSIAN SOIL ! ! ! Kindly note: Blending is an internationally accepted and legitimate way of decreasing the impact of a norm (naturally occurring radioactive material) on the environment and follows the… Read more »

♥ 🙂 😉 WHY SO PARANOID OF THE SO-CALLED “WASTE” FROM LYNAS ? ♥ The Lynas WLP is a VLLW (Very Low Level Waste) ACCORDING TO IAEA ! WLP WITH 6 Bq/g IS CLASSIFIED AS VERY LOW LEVEL WASTE (VLLW) AND IS ALMOST AN EXEMPT MATERIAL and as such can easily be legally, and ethically blended or used directly as a land-fill. Wastes from NORMS which occur in nature and wastes from nuclear power plants which are created, are different. Wastes with short half life and waste with long half life are classified differently. The concentrated ore from Mount Weld is only very slightly radioactive with a tiny radioactivity of 6 Bq/g from naturally occurring elements.. Compare this with the ♥ WASTE FROM MALAYSIAN AMANG INDUSTRY > 100Bq/g and WASTE “SLUDGE” IN OIL AND GAS INDUSTRY ………………………………LIKE IN PETRONAS > 1,000 Bq/g “HARD SCALES” FROM THE OIL AND GAS INDUSTRY CAN HAVE ACTIVITY AS HIGH AS 15,000 Bq/g of Radium-226 AND 2,800 Bq/g of Radium-228. For transportation purposes, A RADIOACTIVE MATERIAL IS DEFINED AS ANY MATERIAL WHICH HAS A SPECIFIC ACTIVITY GREATER THAN a …. >… Read more »

♥ 😉 There is actually no waste products in Lynas and the so-called waste is not wasted but is recycled and made into useful highly profitable products. The operation of the plant will result in the generation of three major residue streams, namely the 1. WLP .. Water Leach Purification Residue (WLP) from the cracking and separation process, 2. FGD .. the Flue Gas Desulphurisation Residue (FGD) from the waste gas treatment system (scrubber) and the 3. NUF .. Neutralisation Underflow Solids from the wastewater treatment process (NUF). ORE FOR LYNAS PLANT ~ 1,600 ppm (parts per million) 2 MOST VOLUMINOUS LYNAS “WASTE” = 12 ppm 3rd RESIDUE STREAM = 1,500 ppm of Thorium AVERAGE MALAYSIAN SOIL = 20 ppm OF THORIUM The first two are classified as non-radioactive as its radioactivity is only half that of Malaysian soil and is much much less radioactive than the SAND THAT YOUR CHILDREN PLAY WITH in our beaches. Lynas will recycle them as synthetic gypsum for plaster board, magnesium rich synthetic gypsum, synthetic aggregate and cement manufacturing products, or as fertiliser. The WLP can be diluted according to… Read more »

♥ 😉 🙂 Quote: ..”that the written undertaking by Lynas to ship all recycled products overseas will be adhered to as directed by the Malaysia cabinet” Unquote Comment: Quote Letter from Lynas: “Lynas Corporation Australia hereby give a full undertaking to, IF NECESSARY, remove from Malaysia all the waste generated Lynas Advanced Material in Gebeng, Kuantan during the Temporary Operating License period.” Unquote. LYNAS will only remove the “waste” from Malaysia “IF NECESSARY”. Lynas will recycle the so-called “waste” into synthetic gypsum for plaster board, magnesium and phosphate rich fertilizers and aggregate as clinker for road construction. At current rates of production, supplies of synthetic gypsum co-products are beginning to outstrip natural gypsum, thus providing valuable new alternative materials and preserving the planet’s natural resources. The WLP can be diluted to less than 1 Bq/g by blending according to international standards and made into valuable clinker for road construction and other construction projects. I repeat, THEREFORE IT IS NOT NECESSARY TO REMOVE THE RECYCLED PROFITABLE “WASTE” FROM MALAYSIA and the recycling of the so called waste will create even more jobs. IF MALAYSIA WERE TO CLOSE… Read more »

Which argument(s) expounded in the article are you not in agreement with? And what is your counter-argument?

Why do you think Australia was and still is trying ‘so hard’ to locate MH370, when Malaysia did almost nothing until months after, they are even trimming down their budget and also their GSP ?
What has the location of MH370 so important to Australia, they don’t own MH370 and most of all just wait and see where would Australia send their refugees to plus all the plants like Lynas they don’t want them in their own back yards ? Expect more of their refugees and plants they don’t want be located in Malaysia !

♥ Quote charleskiwi: “… all the plants like Lynas they don’t want them in their own back yards…” Unquote. COMMENT: It is not true to say that Australia does not allow Lynas to build the plant in Australia. AS STATED BY NORMAN FREDERICK MOORE, THE AUSTRALIAN MINISTER FOR MINES AND PETROLEUM, IF LYNAS HAVE CHOSEN TO OPERATE IN WESTERN AUSTRALIA, IT WOULD BE WELCOMED WITH OPEN ARMS ! A number of other countries have built or are planning to build these rare earth elements (REE) plants. Unfortunately some has been shelved or terminated because of the drop in REE price and was found to be uneconomical. New Rare Earth Plants and Mines 1. Arafura in Whayalla Australia 2. Great Western Minerals in Steenkampskraal South Africa 3. Avalon Rare Metal in Thor Lake Canada 4. Alkane in Dubbo New South Wales Australia 5. Molycorp Inc. in Mountain Pass, California, USA 6. Tasman in Sweden 7. Greenland Minerals and Energy in Greenland 8. Canada Rare Earth in Canada 9. 50 yr Old La Roche Plant in France Alkane has decided to build a multi-billion dollar rare earth plant… Read more »

ABOUT US
Aliran is a reform movement in Malaysia promoting justice, freedom and solidarity.
Contact us: aliran.malaysia@yahoo.com
FOLLOW US
Content may be reproduced without alteration but please attribute to aliran.com
wpDiscuz
9
0
Would love your thoughts, please comment.x
()
x
| Reply