Suaram has called on the police and the Registrar of Societies to cease immediately the harassment and intimidation of leaders of Negara-Ku.

Suaram condemns the Malaysian government, and particularly the Registrar of Societies (ROS), for its actions in deliberately and systematically harassing and intimidating members of the steering committee of the Negara-Ku movement.

We call on the police and the Registrar of Societies to cease immediately such harassment and intimidation against leaders of Negara-Ku.

Five members of its steering committee have already been called in for questioning for their involvement in Negara-Ku, with the sixth and final member, Jerald Joseph, scheduled to be interrogated by the Registrar of Societies on 3 October 2014.

They are being called up under Section 66(1) of the Societies Act of 1966 which states:

The chairperson, Zaid Kamaruddin from Ikram, was brought in to the Registrar of Societies on 27 August to have his statement taken.

This was followed up on 17 September 2014 by Haris Ibrahim, a lawyer and human rights defender with Asal Bukan Umno (Abu), being brought in for further investigation.

Mustaqeem Mahmod Radhi, a project manager at the think tank Institute for Democracy and Economic Affairs (Ideas), and Stanley Yong Yew Wei, secretary general of the Kuala Lumpur and Selangor Chinese Assembly Hall, both members of the steering committee, were brought in for questioning on 24 September 2014.

Jayanath Appudurai, the fifth member of the steering committee who was brought in for questioning, was interrogated on 29 September 2014.

This represents the government deliberately harassing and intimidating, with the intent of limiting the rights to association, speech and assembly, a civil society movement led by human rights defenders advocating unity, human rights, and political moderation.

It is absolutely shameful that the Registrar of Societies is abusing its overly broad authority to harass and intimidate the leaders of a movement, who merely seek to encourage racial and religious harmony in Malaysia, and to ensure the peaceful prosperity and human rights of all Malaysians.

The objectives of Negara-Ku are clear and open to public, which is to defend the Federal Constitution, the Malaysia Agreement of 1963 and the Rukun Negara. There is absolutely nothing wrong with such objectives. The government should thank Negara-ku for helping to promote better understanding among different ethnic groups, maintain a harmonious society and protect the rule of law instead of cracking down on them.

Moreover, Article 10 of the Federal Constitution grants the people the right to freedom of association. Accordingly, the general public have the right to organise in association with others on public interest issues and the responsibility of the government is to facilitate such exercise of the rights of the people and not to curtail it. The Societies Act, which is a parliamentary law, must not supersede the Federal Constitution, which is the highest law of the land.

The intimidation of the leaders of Negara-Ku using the Societies Act illustrates the vast powers given to the authorities and how such powers could be abused and misused in violation of the rights of the people. We call for the immediate review of the Societies Act in order for it to be brought in line the Federal Constitution and the Universal Declaration of Human Rights. 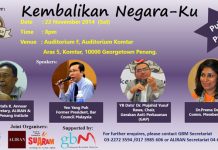 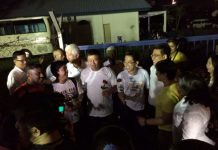 Malaysia must not become an authoritarian state

The present regime is trying to impose their wishes and desire on the people of Malaysia before the next generation or better still before they get kicked out of Putrajaya. As such you can see what is happening now about 17 months after they got to remain in Putrajaya as a minority elected government. Therefore every actions or decisions taken now are not the wishes of the majority but that of the minority. To silent the voices of the majority the Umno dorkys first make use of the sedition act to have them arrested or investigated. As though these are insufficient they are imposing new taxes even after having introduced the GST (Goons Surviving Tax) that will be implemented next year. And now the subsidize of petrol and diesel are slashed and what is next ? Surely these are signals of the desperate situation Malaysia is presently in. Yet the PM is jetting around the world with a private jet, can Malaysia really afford such luxury ? Take Singapore, China or Hong Kong as examples while they have billions or trillions in their reserves their leaders… Read more »