At least six alleged organisers of the “Blackout 505” rallies have been charged with violating Malaysia’s Peaceful Assembly Act 2012 for failing to give police the required 10-day advance notification. On 22 May, police also arrested 18 peaceful protesters at a candlelight vigil outside the Jinjang police station in Kuala Lumpur.

“Prosecuting activists for organising peaceful protests makes a mockery of the prime minister’s promises to establish a rights-respecting government in Malaysia,” said Phil Robertson, deputy Asia director at Human Rights Watch. “The government should drop the charges against the six activists and publicly pledge to cease bringing cases against organizers of peaceful protests.”

The “Blackout 505” rallies in Selangor, Penang, Ipoh, Perak, Negri Sembilan, Johor Bahru, and other parts of Malaysia attracted large numbers protesting the results of, and alleged malfeasance during, the country’s May general elections. The well-ordered demonstrations have generally been confined to clearly defined spaces or venues, such as sports stadiums and empty fields.

For example, Minister of Home Affairs Ahmad Zahid Hamidi told the media that people had to stop the post-election gatherings, and “if they still want to continue, then they will have to pay the price.” Kuala Lumpur Police Chief Mohmad Salleh said the police refused to tolerate the candlelight vigil, “as it will only cause agitation among the public.”

The 10-day notice provision under the Peaceful Assembly Act is contrary to international human rights standards and should be amended along with other problematic parts of the law to protect public assembly and free expression. The United Nations special rapporteur on freedom of assembly and of association, Maina Kai, reported to the UN Human Rights Council in April 2013 that “peaceful protests should not be viewed as a threat” by governments. He flagged lengthy notification periods and recommended a maximum notice requirement of 48 hours.

Human Rights Watch called on the Malaysian authorities to drop the charges against the “Blackout 505” protest organisers, and to end harassment and police investigations of other organisers. The Malaysian government should amend the Peaceful Assembly Act and other laws that infringe on the rights to peaceful assembly and freedom of association.

“Prime Minister Najib should understand that addressing the issues surrounding the May elections means listening to his opponents – not prosecuting them for asserting the right to have their voices heard,” Robertson said. 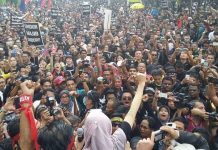