‘Custom Keepers’ in a district of Kalimantan are calling on the Indonesian president to stop a carbon-offset project in in the customary lands of the Dayak people.

We, the undersigned Mantir Adat (Custom Keepers) of Kadamangan Mantangai in the District of Kapuas in Central Kalimantan, met and had serious discussions on 7-8 June 2011 at the village of Katunjung in the sub-district of Mantangai.

Our statement is based on findings from the monitoring and evaluation of the development of the Indonesia-Australia REDD+ project known as the Kalimantan Forest and Climate Partnership (KFCP) since 2009 to the present in June 2011. We hereby provide our assessment and comments with respect to this pilot project:

1. Since the conception of the REDD+ project (Reduced Emissions from Deforestation and forest Degradation plus other factors) way before any consultation at the field level, the location as shown on the map then already suggested that it would be situated within the customary land involving 14 villages and hamlets in the sub-districts of Timpah and Mantangai in the district of Kapuas. The location of the 120000-hectare project area had already been decided without notifying the community or having any consultation with the Dayak community. The site chosen was stated in the letter dated 20 December 2010 No. KT.12/II-KIM/2010, which was signed by the Secretary-General of the Ministry of Forestry of the Republic of Indonesia.

2. The REDD+ project has brought unrest and conflicts to the community. People who are affected by this project felt that they have lost the strong sense of community and kindred spirit because of the project. People are suspicious of each other and the tranquillity and peace which we once had in the villages are gone.

3. The implementation of the REDD project often brings pressure to the community – both physical and psychological – because of the promise of millions of rupiah to those who would support the project. This kind of model is intimidating as it is fuelled by the promise of money. This is not good for the community where in accordance with our custom, we have encouraged the people to rehabilitate and reforest the one million hectares of land damaged by the ex-Mega Rice project in the spirit of community co-operation and self-reliance.

4. The implementation and direction of the REDD program through the use of the KFCP team, namely BOS Foundation, CARE International and the University, have mostly added pressure to local people that their customary access and use of the forest, traditional farming, fishery and other livelihood activities in the REDD project area have been ignored and will eventually cease.

5. Right from the beginning, the REDD project had never given any written assurance that customary land tenure rights of the Dayak community would be recognised. There is however more pressure on the Dayak Ngaju community to recognise the existence of the REDD project site. This is an unfair deal which we cannot accept. The REDD project is clearly a foreign project owned by Australia to offset industrial pollution/dirty emissions from Australia. When in reality, we the Dayak Ngaju people who were born and bred in this land way before this country became an independent state, had never been given the justice of the land, which we have been dependent on for our survival since time immemorial.

With regards to the development of the REDD project to date, the stance adopted by the Mantir Adat is as follows:

1. We, the Mantir Adat of Kadamangan Mantangai, district of Kapuas in the province of Central Kalimantan, reject REDD projects because it is a threat to the rights and the livelihoods of the Dayak community in the REDD project area

2. Urgently appeal to Bapak President of the Republic of Indonesia (RI), Soesilo Bambang Yudhoyono and the Prime Minister of to stop the project that has violated our rights and threatened the basis of survival of the Dayak community.

3. Appeal to Bapak President RI Soesilo Bambang Yudhoyono to immediately confirm through a Presidential Decree the rights of the Dayak community to their traditional land in the Aliran Sungai (DAS) Kapuas region, and to give due recognition that the Dayak community has long since been addressing the crisis of climate change through viable solution for the Central Kalimantan peatland.

4. (Appeal to) Bapak President RI. Soesilo Bambang Yudhoyono to immediately recognise the initiatives of the Dayak customary landowners in peatland management through revegetation, rehabilitation, river management, food garden allocation, customary forests. Our long association and sustainable management of peatland should not be forgotten and ignored in any quest for a solution to address the crisis of climate change, over and above REDD mechanism.

The Dayak community has for a long time protected the natural resources of peatland based on local wisdom. We do not need the aid of REDD mechanism. We do not need promises of any kind. We have been doing what we have done as a solution to the climate crisis for the safety of all human beings in the world – not to seek carbon funds. What we really need at this point in time are free health services, free education, improvement to our skills and knowledge, and access to relevant training; access to technology that is relevant to our needs as well as policies that support our effort to rehabilitate fire-damaged gardens and forests.

This is our stance, which we would like to present to you. We thank you for your attention and we look forward to working in co-operation.

For the attention and cc of: 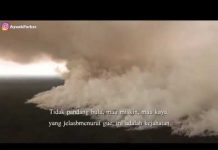 Thanks for this – there’s more about the Kalimantan Forests and Climate Partnership on REDD-Monitor.