The National Union of Journalists is disappointed that the Utusan Malaysia’s domestic inquiry (DI) for NUJ president Ha’ta Wahari scheduled for a day (17 January 2010) did not materialise.

The DI chairman Mohd Bashir Abdul Rahim, for unclear reasons, called off the proceedings which only lasted about 30 minutes.

We were prepared to go on despite the possibility of me (NUJ General Secretary) being disqualifed to represent Ha’ta.

I was surprised the chairman, at the outset of the proceeding which started at about 10.45am, stated that this is a domestic inquiry and that an outsider was barred from appearing for Ha’ta.

I called on the chairman to follow the basic procedure; that the prosecuting officer read the charges against Ha’ta and determine whether he pleads guilty or not.

I informed Mohd Bashir that the prosecuting officer could raise a preliminary objection as to why I cannot represent Hata.

I further informed the chairman that I must be given the opportunity to rebut the prosecuting officer’s points for the three-man DI panel to arrive at a ruling.

I told him that there is nothing in Utusan Melayu’s (UM) collective agreement which suggested that a union representative or a person who is not a UM employee is barred from representing an accused working for the company.

I told the chairman that he was biased and prejudiced by asking me to take the seat in the public gallery and his failure to follow procedure was tantamount to turning the DI into a “kangaroo court.”

We also requested the chairman to take a short break with the hope the panel would start a fresh and follow procedure so that the DI could proceed.

After recess, the chairman appeared adamant that I could not participate in the DI.

Even at this juncture, we did not know who the prosecuting officer was as s/he did not get up to start the DI.

Hata told the chairman that he would be at a disadvantaged position if I (Anbalagan) did not represent him but he was prepared to go on.

He then placed a digital recorder before the chairman to ensure he did not miss out anything during the proceedings. The reason is that he need not take down notes when cross examining the prosecution witnessess.

Ha’ta and I tried to reason but to no avail.

Ha’ta’s employee, UM, instituted the DI after the management claimed he had tarnished the image of the organisation by making disparaging remarks in news portals, The Malaysian Insider, Malaysiakini, Merdeka Review, and theSun newspaper between 21 September and 14 October.

The NUJ maintains that Ha’ta made the statements in his capacity as NUJ president and that Utusan has no power to discipline officials from the organisation.

V Anbalagan is General Secretary of the National Union of Journalists. This statement was made on behalf of the executive council of the NUJ. 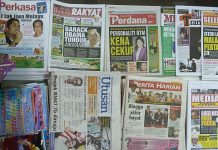 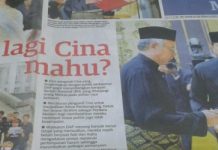 What a joke! Totally hilarious. One step forward, two steps back, a half step to the side and maybe a pirouette? Another fine example of UMNO ‘rakyat didahulukan, pencapaian diutamakan’ action. Go, go, go!