We, the undersigned 58 organisations, groups and networks are appalled that the Malaysian government is now asking about 1.5 million migrant workers themselves, and not their employers, to buy a new Foreign Workers Hospitalisation and Surgical Insurance. If these migrant workers do not do so, the Malaysian government is threatening not to renew their work permits. Health Minister Liow Tiong Lai, also stated that the worker’s work permits will not be renewed if there are outstanding hospital bills (Bernama, 7 January 2011, ‘Foreign Workers with Insurance May Enter Hospital without Deposit’).

What is worrying is that workers should never be required to pay for their treatment and necessary health care especially if the reason treatment is sought is a work-related or industrial accident, or some occupation-related disease.

With regard to migrant workers in Malaysia who are required to get a clean bill of health before they enter Malaysia and before they are given a work permit, it is only right for employers to be liable to pay for all treatment and medical charges if they do get sick in Malaysia. Further, it is generally the employer that determines where these workers must stay and work.

In Malaysia, whilst the social security of local workers are covered by the Social Security Act, migrant workers are covered by the lesser Workmen’s Compensation Act 1952, which unlike the former, does not provide for continuous regular support and assistance until death for a worker who is a victim of an industrial accident or occupational disease. The Workmen’s Compensation Act, on the other hand, only provides for a one-off payment to the victim and/or their dependants where death has resulted from the injury/disease, that is a lump sum equal to 60 months’ earnings or RM18,000, whichever is the less.

It is good that the Workmen’s Compensation (Foreign Workers’ Compensation Scheme) (Insurance) Order 1998 extended coverage to personal injury (and death) that is sustained in an accident which occurs outside the working hours of the workman. Given this fact, there only needs to be a minimum extension of coverage to cover any remaining matters that will require treatment, hospitalisation and/or surgery, and this could be done quite easily by amending the relevant Act and/or broadening the scope of the current insurance that employers already do have to buy for their foreign workers.

Health Minister Liow Tiong Lai was reported saying that this new insurance was to ensure that foreign workers’ medical bills in public hospitals, which to date total RM18 million, will not be a burden to the Government (The Star, 26 November 2010, ‘Compulsory medical insurance policies for foreign workers from next year’). However, this cannot be right as there should not be any outstanding migrant worker medical bills at all.

Under the Workmen’s Compensation Act, the employer is clearly liable to pay for the conveyance to the hospital, treatment, ward charges, medicines and other expenses incurred in the treatment and rehabilitation of such workmen (sec.15). The employer is clearly liable to pay directly to the management of such hospital all fees and charges, and as such one wonders what unpaid medical bills the Minister is talking.

Further, attention also should be drawn to Workmen’s Compensation Regulations 1953, in particular Regulation 18, which deals with the issue of excess fees:

“A workman admitted either to an approved or a special hospital shall, where such hospital is a private hospital, shall himself be liable to pay the amounts of any fees or costs incurred on his behalf in excess of the maximum amounts prescribed by the Minister of Health under section 15 (3) of the Act, and, where such hospital is a government hospital, such excess amounts shall be paid from public funds.” Since, the Minister is talking about government hospitals, there is certainly no way that there exist outstanding medical bills when it comes to migrant workers.

The Malaysian pro-employer government has proceeded to further protect employers of migrant workers by limiting the maximum amount of fees and costs that are payable by an employer under the Workmen’s Compensation Act. As of 1 March 2007 (PU (A) 077/2007), this maximum liability of an employer for ward charges, including surgical ward treatment fee, is RM300, for operation fees RM250, for X-Ray fees RM100, and for other electric therapeutic charges RM100.

But even when the government does limit the amount that the employer is liable to pay, the excess as stipulated in Regulation 18 of the Workmen’s Compensation Regulations 1953 is paid from public funds, and as such, there really is no logical reason why there can ever be outstanding debt. It is really hoped that in Malaysia, the government does not expect the migrant worker to come up with the money themselves before the necessary treatment and/or surgery is done. Employers should make all the necessary payments immediately, and should thereafter do what is needed to claim whatever excess payment from public funds.

The Health Minister is naïve to insist that migrant workers only need to provide their passports before treatment is given, as in most cases the employers and/or the agents wrongly hold on to the passports of migrant workers. Sometimes, the passports are with immigration authorities and/or some other authorities. Hence, in the name of justice, all necessary treatment must be immediately provided to migrant workers on their arrival and registration, without insistence on the production of passports and/or payment of any large deposit. Let not the absence of a document and money be the cause of death or the loss of limbs of a migrant worker in Malaysia.

It is also very wrong to threaten to penalise migrant workers with non-renewal of work permits, when any punishments in law should rightly be against the employer and should not in any way jeopardise the rights and the well being of migrant workers already in Malaysia.

We, the undersigned groups, hereby:-

For and on behalf of the following 58 organisations 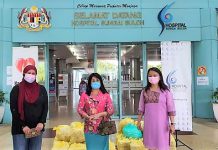 Food for thought: How one residents’ association thanked frontline workers

When healthcare, housing and education are seen as money-making opportunities