Miri – The Sarawak Conservation Alliance for Natural Environment (Scane) has called upon the government to make public its Emergency Rescue Plan (ERP) prior to the impoundment of the dam.

Scane warns Sarawak Hidro Sdn Bhd not to proceed with its flooding trial run for Bakun Dam until an Emergency Rescue Plan (ERP) has been put in place and the public at large adequately informed of the procedures laid down under the plan.

Scane is deeply concerned about the safety of the dam and its adverse impact on riverine communities living downstream and upstream of the dam. The downstream communities include the people of numerous longhouses along the Rejang River who live directly below the dam and the residents of the Belaga township as well as other major towns such as Kapit, Song, Kanowit and Sibu. Within the impoundment area, there are more than a hundred native families living upstream, that is, at the Bakun dam’s reservoir and catchment area.

The Bakun Dam, Malaysia’s largest hydroelectric dam, is located on the Balui River in the upper Rejang River basin, some 37km upstream from Belaga township. Sarawak Hidro Sdn Bhd, a wholly owned subsidiary of the Ministry of Finance Inc, is the owner and developer of the dam.

To this day, the government and the authorities concerned have not yet announced any plan that would take into account the potentially catastrophical environmental consequences of Bakun Dam on downstream communities. So far, there has been no preparation on the part of the authorities to design relevant action plans that are able to address the problems that may arise downstream in the immediate future, as a result of the impoundment of the Balui River for the dam.

Scane is aware of the existence of an Emergency Rescue Plan (ERP), which has been drawn up to prepare the concerned areas for the possible occurrence of dam failure; however this ERP is already too outdated as it was designed more than 10 years ago. Therefore, it is premature for the government and the dam developer to impound the dam if a new ERP is non-existent.

Any action of river impoundment that creates large man-made lakes in a large dam like Bakun will cause environmental disorder that may lead to an unstable ecosystem, the impact of which would be disastrous and far reaching for human beings, wildlife and the natural environment.

As experience had shown in other parts of the world where similar large dams were built, many communities living along the downstream terrains of large dams have had to face grave dangers and suffer economic losses as a result of the construction of the dams.

In Belaga District, as well as those downstream communities, considering their vulnerable location, which is positioned exactly downstream of the dam, it is only natural that they harbour anxiety about the possibility of the dam suffering from any form of structural or functional failure. Such misfortune would surely result in huge financial losses and pose a threat to their safety and lives.

Meantime, while the ERP is yet to be drawn up, the government (both state and federal) should immediately resolve some of the distressing issues affecting communities living upstream and downstream: outstanding compensation on land and property, the resettlement of villages to new sites, water pollution and river navigational problems faced by downstream communities.

Scane strongly calls upon the Government and Sarawak Hidro to immediately stop the plan of impoundment of the Balui River and demands that:

1. the government comprehensively disseminates information on the contents of the Emergency Rescue Plan (ERP) to the people residing downstream of the dam.

2. a memorandum of undertaking be signed and issued to the downstream riverine communities to guarantee that if dam failure or damage occurs, the government or the project developer will be held accountable for the destruction, loss of property and suffering inflicted on the communities.

This means that if such an incident occurs, the government or developer will bear the responsibility of providing adequate monetary compensation to the affected residents.

Scane also urges the government to carry out comprehensive and meaningful consultation process with downstream communities with regards to the ERP. 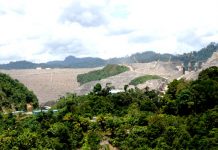 Lucky for Sarawakians today, the 60km logjam happened at the lower stream of Bakun. If it ever happen at the upstream rivers of Bakun Dam… You can expect the downstream communities and Sibu to be (serious danger). What a gift … by Dr M and Taib Mahmud to Sarawakians!