From the listed projects, it appears that we are returning to the era of mega high-status, expensive projects which will provide little value-added to the Malaysian economy, says Lim Teck Ghee.

There are several ways to analyse the budget. One is to take at face value what the Prime Minister has written in his blog just before his budget speech where he promised that it is “a budget by the rakyat”. By it, he explained that he had read through the more than 1,000 comments and suggestions from his readers and forwarded them to the Finance Ministry to incorporate.

According to the PM, there were three key issues raised – employment, taxes and subsidies, and education.

In his words, “employment was the most frequently discussed with some of you calling for the implementation of a minimum wage policy”. Also, he noted that “comments from the youth requested for increased tax rebates for young families or ways to provide financial assistance in managing the rising cost of living”. As for education, the feedback on his blog related to concerns with education quality and the rising cost of education.

Now that the budget has been unveiled, it is clear that the civil servants preparing the budget have completely ignored the Prime Minister. Firstly, the implementation of the minimum wage policy has been further deferred for the umpteenth time. The only beneficiaries of wage reform appear to be security guards who deservedly see their minimum wages raised and female civil servants who will now have longer maternity leave.

As for education, whilst there is a substantial allocation to cater for recurring operational expenditure and some new infrastructural spending, there is nothing new in the budget that can allay the number one concern of middle-class Malaysians. Especially disappointing is the failure to grant relief for private higher education costs which are rising steeply. Given the trend, it looks like higher education will soon be affordable only to those that can get into the public universities or those who have wealthy parents — and also perhaps those that can draw on financing from family members and Ah Longs.

Affordable housing has been very much in the news even if there have been few letters to the Prime Minister on the topic. It is now beyond the reach of many in the younger age group living in the larger towns and especially in the Klang Valley. There is no evidence in the budget of any official concern to tackle the problem.

There are also no measures aimed at curbing the rising cost of living. Why is there a lack of attention to addressing the rising costs of housing, transport and health as well as food? Part of the reason is the government’s Alice in Wonderland estimate of inflation – it has projected a figure of 2-3 per cent for the year. Further, according to the
government’s estimate, Malaysians will be quite a bit wealthier in 2011 compared with 2010. Per capita income is expected to go up by 6.1 per cent to RM28,000, and income in terms of purchasing power parity will hit US$16,000.

This is of course data which does not reflect real life — just a hypothetical average. The majority of Malaysians will, in fact, not only feel but will indeed be poorer rather than richer in 2011 given the relentless rise in cost of living that is not reflected in the inflation data.

One group though that will not be poorer will be the big guns benefiting from the slew of mega projects contained in the budget. They include the planned erection of a RM5 billion tower. This is a potential monstrosity which will serve little purpose except bring to a standstill traffic in that congested part of the city. It is obscene that this is being done in the name of honouring the country’s heritage.

Hopefully citizen groups, residents in the area and heritage organisations can organise and bring pressure to bear on the government to stop this project before it gets off the ground.

As evidence of how poorly conceived the budget planning process has been, it should be noted that the budgeted amount for the year for all the corridor projects — which is supposed to help decentralise development and increase rural incomes and well-being in the other parts of the country — is only one-third of that allocated for this massive planned erection.

Other big ticket items such as the MRT may be economically more justifiable but they have to be closely monitored for the way in which project design, contractors and partners are selected. Already, there is talk of pre-determined winners even before the process of proper technical studies, evaluation and selection has commenced.

It is disappointing that the budget does not deal at all with the procurement issue which has resulted in wastage, inefficiency and higher costs to the average Malaysian in the last 30 years. Presumably we are going to see business as usual in the tenders for Private-Public Partnership projects and the continuation of ‘privatised gain and
socialised losses’.

Another concern is that much of the budget continues to go into operating a bloated civil service. As much as three quarters of the national budget is spent on paying salaries and other benefits to over 1.3 million civil servants.

This means that of every dollar spent in the budget, 75 sen goes towards manning the civil service, leaving little left to carry out development work that can benefit the country’s population. There is clearly something fundamentally wrong in the way the country’s budget is being spent when so much of the allocation goes to paying for a sector that is generally regarded as unproductive and standing in the way of efficiency.

Finally, this is a budget that is touted as being friendly to business. The question is not only which and what businesses will benefit but also whether the projects undertaken will benefit the country.

From the listed projects, it appears that we are returning to the era of mega high-status, expensive projects which will provide little value-added to the Malaysian economy. Projects such as the proposed RM5 billion tower should be scrapped, and the resources spent instead on the expansion of public housing, transport, health and other badly needed amenities and services that can truly benefit the ordinary people. 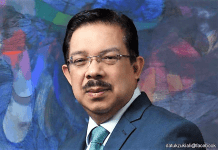 OPEN LETTER TO UMNO YOUTH LEADER THE GREAT KHAIRY JAMALLUDDIN DEAR MR.KHAIRY WITH DUE R$ESPECT SIR, YOU ARE SCREAMING FOR 30 PERCENT EQUITY FOR OUR BELOVED BUMIPUTRA BROTHERS , I TOTALLY SUPPORT YOU BUT I HAVE ONE QUESTION. HOW CAN YOU SAY THAT YOU MUST ACHIEVE 30 PERCENT BY 2020 WHEN 60 PERCENT OF OUR BELOVED MALAY BROTHERS AND SISTERS LIVE BELOW POVERTY.(YOU SAID SO YOURSELF) AFTER 53 YEARS OF UMNO RULE UMNO HAS FAILED MY MALAY BROTHERS ANDS SISTERS(I AM FEFERING TO THE 60 PERCENT) THE OTHER 40 PERCENT HAVE BECOME SO FILTHY RICH THAT THEY HAVE FORGOTTEN THE KAMPONG BROTHERS AND SISTERS. AS UMNO YOUTH LEADER YOU MUST BE HEARD, SOUND OFF TO THOSE WHO PLUNDER AND STEAL THAT YOU WILL NOT TAKE THIS ANY MORE. BECOME A TRUE MAN AND A GREAT LEADER WHO WILL FIGHT FOR THE POOR AND UNDER PRIVELAGED . DO NOT BECOME A PUPPET OF THOSE WHO HOLD THE ROPES, CUT LOOSE FROM THESE ROPES AND BE YOUR OWN MAN. ONE DAY WILL COME WHEN MY VISION OF YOU BEING A MANDELA WILL BECOME A REALITY I HAVE FAITH… Read more »