The transparency of the polling and counting process on polling day does not preclude other types of electoral fraud, says Prema Devaraj.

The results of the 13th General Elections have been met with allegations of electoral fraud and offences including extra boxes being introduced, phantom voters, displaced voters, indelible ink washing off, vote buying and so on.

To help clarify some aspects, this article focuses on the way in which the polling process and the recording of votes takes place on polling day. The key roles of two forms used on polling day –

are highlighted as both these forms help to reduce the chances of electoral fraud by ensuring the transparency and accountability of the polling and counting process. We are using the parliamentary constituency of Sungai Siput as an example.

For this last election, the Sungai Siput parliamentary constituency had 51,596 registered voters and consisted of two state seats – Lintang (N21) and Jalong (N22).

Each locality has one or more voting streams i.e. classrooms in the school in which voting takes place depending on the number of voters registered to vote in that locality. In total, Lintang had 49 voting streams and Jalong had 52 voting streams as shown in the Table (4th column).

Clearly this type of information (together with the electoral roll for the constituency) is crucial for every candidate (and indeed for public knowledge) but at the moment it is only available at a price (approximately RM200) either as a hard copy (a set of books for each state constituency) or in a CD prior to nomination day.

The candidate can then compare this information with that of the previous election to see whether new voting districts have been added or if there has been a sudden increase or decrease in the number of voters registered in any one voting district. And of course with this information the candidate and his/her team can organise the recruitment and placement of polling and counting agents.

Polling and counting agents play an absolutely crucial role in protecting the candidate’s interest and ensuring that the process of polling and subsequent counting is transparent.

But as can be seen from the Table, the implications for (volunteer) human resources are considerable. Sungai Siput had 101 voting streams. If the ideal situation is to have two shifts of polling agents (morning and afternoon) and a separate shift for counting agents, then over 300 people are needed! In the Sungai Siput scenario, the decision was to have two shifts with the second shift of polling agents doubling up as counting agents.

And it isn’t just ‘on the day’. Polling and counting agents need to be told about the procedures, their responsibilities, what to look out for, how to object if something is not right, and the purpose and how forms should be filled.

So briefing sessions prior to polling day were held and people had to give up an evening to come and sit through this. A few volunteers had previously undergone Pacaba training by Tindak Malaysia.

Recruiting sufficient numbers of polling/counting agents is always an interesting endeavor. There were many willing volunteers who wanted to be or agreed to be part of the democratic process for change (including those from outside Sungai Siput i.e., from Cameron Highlands, Seremban, Kuala Lumpur, Taiping, Ipoh and Penang).

There were one or two who wanted to know if they would get paid and were told this wasn’t that type of candidate; a few were worried about ‘trouble in the evening’ and needed reassurance and of course there were a few who could only do a two-hour shift and they were duly accommodated. Needless to say everyone, to their credit, persevered despite the lack of payment and the duration of their duties.

The first shift of polling agents arrived at the Sungai Siput service centre by 6.30am. They collected their files and identification tags, had some breakfast and went off to their voting streams.

Figure 1 is an example of Borang 13 from the EC Guidebook for Counting Agents May 2012.

At lunch time, the second shift of polling agents (who would later double up as counting agents in the Sungai Siput scenario) were sent off from the bilik gerak with their tags and again with reminders to make sure Borang 13 is completed properly, please count properly and don’t go for teh tarik, bring back Borang 14 first!

When voting stops at 5.00pm (except in the four Orang Asli voting districts where it stops earlier), the ballot boxes are sealed. The KTM completes Borang 13 by recording the serial numbers of the ballot papers issued to the voters (Part B), spoilt ballot papers ( i.e. those returned to KTM, marked spoilt and not put in ballot box) (Part C) and unused ballot papers (Part D).

The total number of ballot slips to be accounted for in the ballot box at the end of the voting day (i.e. Part A – Part C – Part D) is recorded in Part E of Borang 13. This document is signed by the KTM and also by the polling agents present as stated in Regulation 24(1)(c) Elections Regulation 1981.

This means that the polling agent of each candidate has a chance to check the details recorded at each stream and sign off on those (Figure 1).

Once Borang 13 is completed, the KTM will open the ballot boxes (two in each voting stream; one for parliamentary seat and one for state seat) in the presence of the counting agents and the ballot papers will be counted.

If there are more, a couple of things should take place. Firstly the recording in Borang 13 is checked for any error. Next, the ballot papers are inspected for the official perforation mark/stamp of that voting stream. Ballot papers which do not have the official mark are removed (Regulation 25, Third Schedule, Elections Regulation 1981).

If after this the numbers are still higher than that stated in Part E Borang 13, counting agents were told to insist that the serial numbers of the ballot slips be checked against what was recorded in Borang 13 Part B. Ballot papers with serial numbers which don’t match should be rejected.

Once this has been settled, the counting commences with ballot papers now being separated according to the candidates/parties voted for.

Counting agents need to pay attention to ensure accurate counting (i.e. that votes are accurately determined for the candidate, that 10 ballot papers are counted as 10 and not more or less and doubtful ballot papers are sorted out properly). Assuming that there are enough agents and that they do their job, this process is open and clear.

NB: A recount can only take place in the voting stream. If the difference of votes for the highest and second highest candidate differs by 4 per cent or less of the total valid votes cast, a counting agent can ask for a recount once; however, the KTM can order a recount at his discretion (Regulations 25(13) and (14) Elections Regulation 1981).

After the counting has been done the KTM fills up Borang 14 in the presence of the counting agents. This is the official vote count from that particular voting stream.

The first part of the Borang 14, Part A, states the number of ballot papers in the ballot box (this is the same as Part E of Borang 13).

Part B is a record of the number of votes cast for each contesting candidate.

Part D is the number of ballot slips issued to voters but not put into the ballot box.

Figure 2 is an example of Borang 14 from the SPR Guidebook for Counting Agents May 2012.

After this, the ballot boxes from the voting streams are taken to the MTC with the accompanying Borang 14 by EC officials. At the MTC, the official totalling up of all the Borang 14s from all the various voting streams for both the parliamentary and state seats takes place. There is no more counting of votes here. For the Sungai Siput Parliamentary and State seat, there were 103 Borang 14s (including those for postal votes and early votes) for each seat. The tallying of votes at the MTC matched the candidate’s calculations based on the copies of the Borang 14 which his counting agents had passed to him.

If all the polling day processes have been properly carried out, monitored and recorded, the sudden introduction of a mysterious ballot box with votes to swing the final count at the MTC is very difficult to pull off.

The information on existing voting localities, the number of boxes from the voting districts/streams, the corresponding Borang 13/14 and the candidate’s counting agent’s signature on Borang 14 make this type of fraud difficult to pull off. It would be spotted immediately by the candidate monitoring the situation and an objection made.

Furthermore, to avoid confusion or disappointment or accusations of foul play, results should not be released until all the Borang 14s have been totalled up. A candidate may or may not have uniform support from voters in the various voting districts.

So as the different Borang 14s are brought from the various voting localities/streams to the MTC and totalling up is taking place, there can be fluctuations in who has more votes at a particular point in time of the tallying of votes and misreporting can take place.

Transparency of the electoral process on the day but…

Furthermore, the transparency of the polling and counting process on polling day does not discount the other types of alleged electoral fraud including irregular electoral rolls, voters being removed or displaced from the rolls, phantom voters, double voting, the uneven delineation of constituencies, vote buying, and indelible ink being washed off. These must be urgently addressed by the EC.

There is obviously widespread public disquiet at the role and conduct of the EC and there is a big task ahead of it if it is to regain its credibility.

The general election is when the people determine through their votes who will govern them. In respecting the choices of the people, it is imperative that there is transparency in and accountability at all levels and in every stage of the electoral process so that the outcomes, whatever they may be, can be trusted and respected by the people.

Let’s all work constructively towards that. We probably have five years to make it happen for next time around! 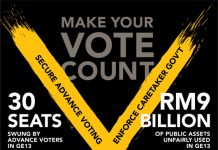 Bar: Hearing of challenges to Electoral Commission should be fair to all parties

One can now come up with all kinds of evidences of fraud used in the GE, especially so now that EC has done his job in installing the Umno rapscallions back as tenants in Putrajaya . Any evidences of fraud presented mean nothing to the EC, as they will continue to counter these claims. They know it will never be legally proven or at least it will take a lot of time for them to be proven in court and that is why the EC keep telling the opposition parties to take their dissatisfaction to the court.
Even if the opposition can eventually prove any of the frauds, Umno will only have their stay in Putrajaya for another term !