Historical misfortune reduced the South Indians to subservience to the colonial masters who ruled both India and Malaya. For the poor Indians in Malaysia, Independence meant a shift from colonial to neo-colonial masters. They had contributed to opening up this country with their sweat and blood and lives laying out the infrastructure for the country’s development in which they have been denied a stake. After 56 years of independence the plight of the poor Indians has changed very little. They remain marginalised politically and economically.

Today, on the threshold of the 13th general elections, the Prime Minister pleads with them to trust him when their decades of pleadings had been ignored. Nambikai in Tamil means a trusting faith and hope, a belief that their future expectations will be fulfilled. They are expected to vote for him in exchange for promises. Is the person making the promises trustworthy?

Najib said: “Please give me ‘nambikei’ (trust), please believe and have confidence in me. If you give me and the BN government ‘nambikei’, we will certainly do more for the success of the Indian community in the country. I will ensure that the Indian community will enjoy a better future just like the other communities. We will set up pre-school education in SJKT. The government will allocate funds to upgrade community centres and crematoriums and raise the equity for the Indian community.” Then he woos the Chinese by beating the drum. The Tamils know the meaning of a drum-beater.

The Tamil schools have not received government assistance since Independence and only now he talks about converting them into fully government-assisted schools in stages.

Too little too late, one might say. Yet they all remain promises. Others say that the poor stupid, ignorant toddy-drinking Indians can easily be bought. People who say this in such a pejorative way show their lack of understanding of the poor Indian Malaysians. They also say that alleviation of poverty must be irrespective of race and to champion one ethnic community is racist. Poverty in all the different ethnic communities in Malaysia is a fact to be addressed.

The Indian poor in Malaysia, however, have specific issues not shared by the other poor and merit a specific analysis. From a socialist perspective, alleviation of poverty is a class struggle that must cut across ethnicity.


The Indian community, although plagued by the caste system also has a specific class distinction within the community. From the British era, the educated English-speaking, white collar Indians never associated or identified with the poor working-class Indians. Indian Associations were set up to defend the rights of the Indians but most of their members, who were interested in government positions and business opportunities, had never set foot in a plantation. This disparity within the community was and is deeper than the racial divide. This is the dilemma that has trapped the Indians in the dark tunnel.

Voting in a new government may or may not bring about some change but the struggle of the poor Indians will go on. Government policies, like the New Economic Policy of 1970, promised the eradication of poverty irrespective of race but grossly failed in implementation where the Indian community is concerned. The industrialists and the market forces would continue to dictate their capitalist priorities detrimental to the poor.

Hindraf has indeed put the finger on the problem with its 18-point demand but the demands address outside sources to resolve the problem. The festering problems of the Indians lie within the community itself.

The solution lies within the community. What is the point of identifying ourselves as Malaysians when an identity gap exists within the Indian community itself! The Indians were not leaderless but bad leaders in government and trade unions had kept them dependent on handouts and illiterate, with no knowledge of human rights or any rights they are entitled to including the right to citizenship; instead they were fed with propaganda material that fuelled false hopes. Hence it does not take much to entice a people who have lived for generations in a culture of dependency. Can they really be blamed when Najib dangles the carrot before them?

The Indians themselves will have to grab the horns of the dilemma with both hands and actively address the problem of disunity. The middle- and upper-middle-class Indians must take a genuine interest in the poor Indians, becoming part of the solution; they must stop being part of the problem. They have to learn a lesson from the Chinese community that set its priority in education without depending on the government. Empowerment through education is the beginning of independence. We can wait another half century; this kind of independence will not fall from the sky, whichever government is in power. It has to be nurtured from within.

The first batch of doctors, lawyers, engineers and other professionals in the country were Indians after the British, but they set themselves apart from the poor Indians whereas the wealthy Chinese made contributions to bring up the poor in their community. The Indians have lagged behind because of the self-interest of well-to-do Indians. There are indeed very well-to-do Indians today like Ananda Krishnan and Tony Fernandes.

Resources and expertise to uplift

The wide gap between the rich and the poor of all Malaysians must be narrowed down without prejudice to any race. Nevertheless, a specific problem calls for a specific solution. The Indian community remains backward and no outside group of people has lent a helping hand. I am not here advocating the exclusive development of a ghetto community, but if they fail to rise from within, the poor Indians, already being replaced by foreign labour, will become thieves and robbers and criminals and the scum of society. They cannot expect a silver platter from outside of themselves.

When the poor Indians are empowered to independently stand on their own feet with dignity they will emerge from the dark tunnel, and with a sense of belonging, they will be in a better position to contribute with both brawn and brain to the advancement of the basic concept of One Malaysia.

Dave Anthony is an Aliran member based in Kuala Lumpur. He recently authored a historical fiction book, ‘Love and struggle: Beyond the rubber estates’

Looking forward to tonight: Mahathir, remember what you promised 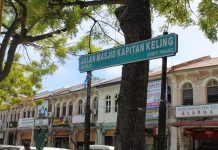 ‘Keling’ offensive when uttered – but not so when displayed? 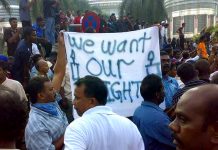 Roland, what do you mean by “more Indians are much richer than the Malays and Chinese? Also, please don’t personally attack the writer. Its not cool.

the writer himself is a filthy rich indian. what have you done to help your people? samy vellu to blame? i dont think so. the malays never look down at the indians. in fact more indians are much richer than the malays and chinese, dont u agree? did the malays take away anything from them? pls stop being racist!

A good article but surely it needs to be balanced by the work being done.
i cannot speak on behalf of the other PR states but in selangor quite a bit of effort has been put in to start solving the problems faced by Indians.
For example in selangor
4 million a year for tamil ed ( so 4 x 5years = 20 m)
half of it on the infrastructure of sch and the rest on programs to change the mind set/motivation. These programs were run by child/ewrf/tamil foundation.
off course not all prob solved, but at least a start has been made

I agree that Malaysians of Indian descent are disunited. There are various communities within the descendents of Indians, not least based on their cultural backgrounds. Not all Malaysians of Indian descent are hindus for a start, a significant number are Christians. It seems that the upward mobility of Indian-Malaysians is still largely governed by the past. This is an issue that needs to be addressed by politicians – helping those who wish to do so to break out of the bonds history has placed on them through education opportunities and meritocracy.

An article properly researched and written. Indians are disunited and thus this unity has allowed for the top people to divide. The recent past Indian leader of the MIC has gained through the misfortune of other Indians.The report that he may be a BN candidate again is laughable. So disheartening to know how many Indians today dont even have identification papers that leads to non accessibility of education and the circle of poverty and discrimination continues..Time to make the change. Our PM has said in his recent plea to Indians that there has been some change to the Indians recently. I say that little is a little too late.My message to Indians, before we can be 1Malaysia let us first become 1Malaysian Indians first.

nobody else except their own kind to sincerely help them just like the chinese community.

Vote the opposition and bring some sense to malaysian politics.

What dilemma! The poor ignorant Indians were seen as an opportunity by the scrupulous Indians as a means to enrich themselves by claiming to represent them. History has proven that Samy and gang used them for his agenda;

Less than RM1.0m worth project from the RM2.0m alloted for a Hindu crematorium in Serendah, Ulu Selangor. Selayang councilors from MIC (allegedly) approved the Condo project that posed a danger to Batu Caves. Now the HINDRAF gang smell an opportunity to get megabucks from Najib at the expense of the poor Indians. Looks like PR’s offer of 13 points are not enough compared to …. offer from Najib. Cheaper for Najib to win Selangor by that offer than (enticing) at least 10 PR ADUNs.