While natural disasters are occurring almost simultaneously around the world and nations need to come together to save our planet, Malaysia remains on the sidelines refusing to recognise the looming catastrophe, observes Angeline Loh.


It’s raining, it’s pouring, the ground is getting more and more soggy; very soon the water is ankle deep, then knee deep, then thigh deep, then waist deep, then chest deep, suddenly neck deep…you slip on the muddy ground and are carried away, drowned in the swirling flood currents.

Did we see this coming? Yes, we did but some of us refused to believe predictions by the “eco-eccentrics” and “prophets of doom” that seemed morbid beyond reason. These predictions were branded unreliable and downright threatening. Who did they threaten? What did they threaten? Why are the developed and under-developed nations so worried? Why has the world gone to Copenhagen?

The first time I learned about the prospect of climate change was way back in the 1980s. The climate debate had probably started many years before when some very observant person, who may not even have been a scientist, noticed subtle uncharacteristic changes occurring in her/his local ecological environment. There were NGOs in Malaysia at that time that were already aware of the impending disaster poised to engulf the world 20 years into the future. They were not the only ones.

There was an ecological conservation and protection movement awakening around the world with the birth of Greenpeace, with their “Rainbow Warriors”, and other modern environmental societies and organisations that preceded the animal rights movement. They took a more revolutionary – activist approach towards nature conservation and ecological protection than the older, long established, more conservative nature societies. Environmental protection subsequently became a political issue when the Green Party was founded in Europe.

These long-standing nature conservation societies were set up by European pioneers interested in discovering and studying the flora and fauna of the colonies. Organisations like the National Geographic Society (1888) and Malaysian Nature Society *(est.13 January1940 http://www.mns.org) and later *The World Wide Fund for Nature (WWF) (est.11 September 1961 http://www.panda.org) grew from these traditional colonial roots. However, the phenomenon of climate change, extinction of wild life and flora has made these organisations extend their mandates to cover nature conservation and protection advocacy.

In Malaysia, the modern genesis of the movement was conceived within the consumer movements. NGOs like the Consumers Association of Penang (CAP) diversified its mandate of advocating on consumer rights issues to the effects of consumerism on the environment. It realised, in the 1970s and 80s, that in the race towards development, Malaysian society was pushing itself to become highly consumerist with all stops unplugged. From this, CAP found it necessary to set up a subsidiary solely concerned with ecological issues i.e. Sahabat Alam Malaysia (SAM).

The exposure of manufacturers’ tactics to increase consumption using e.g. planned obsolescence (V. Packard, “Wastemakers” 1960.http://www.en.wikipedia.org) in manufactured products – by social critics and consumer rights advocates like Vance Packard (1914 -1996) and Ralph Nader in the US attempted to change the mentality of a rich throw-away society where re-use or recycling was out of vogue and mountains of useful garbage were becoming increasingly difficult to dispose of.

Yet, Malaysian society, in imitation of the US, and the societies of other developed countries, egged on by government, followed this superficial path to modernisation and perceived development. We rushed to join the race without the basic and vital safeguards, without weighing or examining the limits to which the country could afford to go without sacrificing our economic, multi-cultural, political and ecological cohesion. To cap this, the government unwisely ignored the need for proper and just democratic planning in consultation with the people. Worse still, it was fashionable to suppress such criticism – or what the authorities perceived as criticism – with the ISA sledgehammer to appease foreign investors.

In fact, it was this trend and the consumer fall-out that gave rise to the consumer movement, with burgeoning industrial development that created larger markets in developing countries for manufactured goods. The R & D boom in developed countries created a new kind of international economy that was very like the colonial economic system of the 19th century despite the attainment of independence by former European colonies in Africa and Asia from the 1900s to the late 20th century.

Thus where former colonial governments had withdrawn their political control, developed country multinational corporations rushed in to fill the gap in the flow of economic wealth to the First World. The gush of foreign investment into developing countries like Malaysia, Singapore and Thailand from the United States and Western Europe peaked, and governments of these developing countries did everything to please the foreign investors including suppressing the warning voices of ecological doom.

The 1980s may be hailed as a landmark decade in Malaysian history; when global economic recession demonstrated to us that our economic house was build on the quick-sands of foreign investment. Foreign investment was always given preference over development of local industries. Foreign investors enjoyed every incentive the government could give e.g. tax exemptions and amnesties. The trade union movement came under attack again since the 1952 Emergency. Sadly, the trade union movement appears to have fallen into complete disarray from which it has never recovered.

With solid foreign investor protection put in place, we have acquired wealth on the backs of local as well as migrant labour in an environment of thriving corruption, human rights violation and even higher consumerism that sees ecological disaster as an evil to be tolerated, as long as it has no direct impact on our individual lives. Our throw-away habits die hard and few would take the trouble to inculcate and practice eco-friendly lifestyles. Many of us wait for the government to lead the way. The government waits for the private sector to lead it.

READ MORE:  New Malaysia not dead – but it needs a jumpstart

There is something going on in Copenhagen: small under-developed island nations are leading a protest by poorer countries threatened by rising sea-levels – an effect of climate change – against developed superpowers that seek to maintain their comparatively extravagant and highly consumptive sophisticated lifestyles and higher standards of living. On 13 December 2009, over international media broadcast, the representative of Tuvalu at the Copenhagen climate talks made an impassioned plea to the US and the international community to agree on a legally binding solution on climate change to save his country from total oblivion. (ntv7 News)

Riots broke-out amongst peaceful protesters outside the meeting venue in Copenhagen with Danish police accusing particular groups of  being troublemakers and counter accusations of police brutality hurled in return. Yet, in Malaysia few see the significance of the Copenhagen climate talks.

We are preoccupied with our immediate situation including the political ‘sandiwara’ in the Barisan Nasional and the Pakatan Rakyat camps. Many prefer to live their lives today as they did yesterday for better or for worse. We have no time or incentive for internal reflection or evaluation of whether we are a cause of our odd and unpredictable weather conditions. A tragedy is taking place around us, yet most of us remain impervious and immune to its significance and implication.

That ecological preservation and environmental protection are bottom priorities on the government’s list is more than obvious. Our national car manufacturer, Proton, has come out with a new model the “Ezora” MPV and is going to export these and more to Thailand in future in a new trade deal between our governments. As an after thought, the Deputy Premier adds that eco-friendly features will be included and hopes to go into eco-friendly car manufacturing in future.

All these wonderful eco-friendly plans are for the future. How long term are those plans? What do we do with our current eco-unfriendly transport system where the private car is the star choice vehicle because no sensible public transport system exists?

In its obsessive support of our car industry, the BN Government has built numerous roads, overhead roads and proposed second bridge links (including proposed crooked bridges, now scrapped) to cater for unimaginable hordes of vehicles across the country.

READ MORE:  What they don't tell you about GDP growth

With minimum monitoring of the extent of air pollution levels contributing to green house gas emissions, private citizens are pressured by hard sell into car ownership. Then, there is the issue of open burning that is blamed squarely on paddy farmers whiles large plantation corporations seem overlooked.

One of the most laughable allegations posted on a blog was that wet rice growing causes high methane gas (a green house gas) emissions contributing to climate change. So should we stop eating rice? Deforestation is blamed partly on poor firewood collectors, whiles licences are handed out like sweets to large timber companies to legally log forests with little serious monitoring and enforcement about replanting. This brings to mind the public educational commercial alleging that jungles are lost through illegal logging.

The megalomania continues with mega projects and high-rise tower blocks steadily marching across the horizon, blocking out once scenic views and sunlight on the ground. The concrete jungle continues its rampant growth. Despite the numerous landslips that come with recent frequent torrential showers, the tragedy of the Bukit Antarabangsa and Highland Towers barely 10 years ago, and the landslip that destroyed a part of a Mara college in Bentong, Pahang on 6 December 2009 (Malaysian Mirror 8 Dec.2009), the determination to continue hill-slope and foot-hill building apparently remains unthwarted in the wild pursuit of profit.

Setting up a ‘Green Party’ by BN sympathisers to show the world that our politics is fashionable is merely for show, as these ‘paper heroes’ lend full support to the installation of nuclear power plants in the country.

Do these puppets really know what this entails and what devastation a nuclear accident can bring before they sing the praises of this dangerous alternative? Many developed countries increasingly shun nuclear energy from hard experience and knowledge of nuclear devastation. The Japanese banned it altogether after the atomic destruction of Hiroshima and Nagasaki by the Allies in 1945.

Now, when natural disasters occur almost simultaneously in so many places in the world and nations need to come together to find a workable solution to save our planet, Malaysia remains on the sidelines refusing to recognise the looming catastrophe. We should add our voice in support of the disadvantaged poor nations facing imminent extinction, but the government fears upsetting foreign investors. Our dependence on them is apparently addictive as the Government seeks to increase its fix and will continue to do so at the rakyat’s and the world’s expense.

Aliran exco member Angeline Loh highlights our apathy towards environmental degradation and climate change as an urgent issue that Malaysians should be aware of and consider. 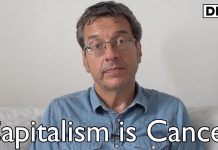 Capitalism is the Planet’s Cancer: Operate Before it’s too Late 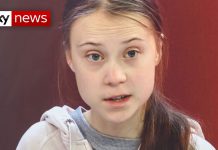 ‘Our house is still on fire’: Greta Thunberg