Aliran strongly urges the government to stop deportation of undocumented migrants some of whom could be asylum seekers qualifying for determination of their status as refugees by UNHCR.

Aliran was informed that on 7 October 2009, 207 Sri Lankan migrants were arrested and detained in the KLIA Immigration Depot. Among them were 15 women and six children. Some of them are fearful of being deported to their home country as their lives might be in danger if they are repatriated.

Information received by Aliran recently is that UNHCR was refused access to these Sri Lankan asylum seekers and refugees by the Malaysian Government, effectively violating their right to seek asylum under Article 14 of the Universal Declaration of Human Rights(UDHR).

A few weeks ago about 200 Myanmar migrants were repatriated in an official repatriation exercise agreed between the Malaysian and Myanmar governments. Although, the Myanmar government claims, it is initiating these repatriations to re-employ jobless Myanmar migrant workers in their own country (www.china view.cn, 7 October 2009), many who have been found ‘undocumented’ or whose documentation was ‘unrecognised’ were deported prior to this official repatriation. In cases, UNHCR-registered refugees and asylum seekers were known to be amongst the numbers deported out of the country or sold to human traffickers.

Unofficial figures from a reliable source put the number of Myanmar nationals deported in the recent government repatriation exercise at nearly 1,700 persons. A majority are said to be reluctant to return to their country but might do so, forced by the inhuman and squalid conditions in Malaysian immigration detention centres, where outbreaks of illnesses are increasing in frequency due to bad food given to detainees and insanitary detention conditions.

A United States Committee for Refugees and Immigrants 2008 report states that nearly 2,300 refugees and asylum seekers were deported by Malaysian authorities to Thailand last year, and “at least 14 of whom Thai authorities deported on to Myanmar”. Deportees are also vulnerable to being trafficked by human traffickers, as the report further explains.

These arbitrary deportations amounting to refoulement (in the case of asylum seekers and refugees) are in blatant disregard of Malaysia’s obligations as a member of the UN Human Rights Council and the United Nations. The concerns raised by various quarters stem from the overall  inhuman treatment of ‘undocumented’ migrants who form the bulk of immigration detainees, from arrest to deportation.

READ MORE:  Zakir Naik should be charged in Malaysia, not deported if Malaysian laws were broken

(Refoulement is defined as the removal of a person to a territory where she/he would face persecution. Refoulement constitutes a violation of the principle of non-refoulement, and is therefore a breach of refugee law and of customary international law ( http://www.uniya.org). It is also a violation of Article 14 of the UDHR.

Conditions of detention remain “inhuman and degrading” as described by Amnesty International in its 2004 Report on mass deportation of undocumented migrant workers including refugees and asylum seekers. These conditions have in fact worsened with reports of deaths occurring in immigration detention centres this year due to contagious diseases, alleged torture by police and in cases,unknown causes which have been revealed in a plethora of more recent reports and memoranda by numerous other Malaysian and international NGOs concerned with migrants and refugees (e.g. NGO Joint Press Statement, 25 September 2009).

The 2004 AI Report stated amongst other things: “In any case of mass expulsions, there is a risk that the expulsion will be tainted with discrimination and arbitrariness, and will therefore be inherently unlawful. The collective nature makes it virtually impossible for the state to provide the necessary procedural guarantees and to ascertain whether those expelled are some who are legally entitled to be in the country.”

Not only is deportation of refugees in violation of human rights, the manner in which it is carried out is a process lacking humanity. This was clearly evidenced in the 2006 case of Timah Basir and Nurhani Nurmi, who were both deported with their parents from Sabah to the Philippines.

Mass deportations of Acehnese were carried out in the years prior to the 26 December 2004 tsunami disaster that destroyed Aceh and the subsequent peace agreement between Gerakan Aceh Merdeka (GAM) rebels and the Indonesian government. This was despite some of them being refugees and asylum seekers.

Since the peace agreement, the Acehnese are no longer classified as refugees by the UNHCR. The Malaysian Government should not return or allow refugees and asylum seekers to be returned by force to situations that endanger their lives. Doing so contravenes the principle of non-refoulement.

The Malaysian authorities’ actions in August 2003 undoubtedly revealed the intention to deny asylum seekers international protection. In that year, Malaysian police set up road blocks around the office of the United Nations High Commissioner for Refugees (UNHCR) in Kuala Lumpur and “detained scores” of Acehnese asylum seekers who wanted to be registered with UNHCR, preventing asylum seekers from being registered with the UN Refugee Agency.

The UNHCR spokesperson said then in his press statement that “because of the situation in Aceh “we believe that these civilian Acehnese must be protected and should not be returned to Aceh”; where 600 people had been killed in Indonesian government military operations against Acehnese GAM rebels and a series of human rights violations were known to have occurred. (World Socialist Web Site http://wsws.org) The same principle applies to all refugees and asylum seekers regardless of nationality.

Clearly, undocumented migrants, asylum seekers and refugees should not be returned to situations in home countries where they would face human rights abuse such as arbitrary imprisonment, persecution, torture and possibly death. Burmese deportees who have returned to Malaysia after being deported to Myanmar testify that they were detained for “up to 5 months”, tortured and fined 6,000 to 50,000 Myanmar kyats (US$1,000 to US$7,900) (USCRI, World Refugee Survey 2008 – Malaysia).

Yet the Malaysian Government persists in deporting migrants allegedly ‘undocumented’ including asylum seekers and refugees, returning them to life-endangering and human rights-abusive situations that exist in Sri Lanka, Myanmar and other countries from which migrants may emigrate for safety reasons.

In 2003, assurances had also been given by the Malaysian government to the UN Refugee Agency that persons fleeing situations of conflict “would not be sent back to a situation that could endanger their lives and well being.” (UN News Service, 5 Sept 2003) This was with reference to the droves of Acehnese refugees who had then sought safety in Malaysia from the conflict in their homeland. Yet, in September that year UNHCR’s High Commissioner publicly called for a moratorium on deportations of Indonesian asylum seekers in Malaysia.

READ MORE:  Leave behind prejudice and fear to change narrative on migration

The High Commissioner noted that reports of deportation of persons seeking asylum here were “at odds with the recent assurances from Malaysian officials…” The High Commissioner had also spoken to senior officials in the Foreign Ministry and a high-level delegation was subsequently sent to Kuala Lumpur to discuss ways of handling asylum issues to meet refugee protection needs (UN News Service, ‘Malaysia: UN agency seeks moratorium on deportations of asylum seekers’, 5 September 2003).

In spite of these efforts by the UNHCR, the same reassurances given by the current administration remain as lip-service to Malaysia’s international legal obligations to uphold and promote human rights for peace and security in the region and in the wider international community.

Angeline is an Aliran member with a special interest in the rights of migrant workers, refugees and asylum seekers.

In new Malaysia, moving from ‘tolerance’ to a celebration of diversity 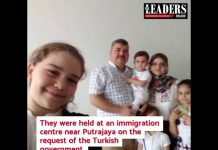 Malaysia’s return of asylum seeker and family to Turkey unjust