The Najib administration seems to be very much into KPIs. To help the premier, a string of civil society activists has laid down ten benchmarks for Najib’s next hundred days. Economic reforms alone, they point out, will not work if the political environment suppresses the people’s democratic rights.

July 11th marked the first 100 days of Najib’s premiership. Will his 100-day performance serve as an indicator for how our country is likely to be governed for the next four years, or was it all a big public relations exercise? The next 100 days is just as critical and we, civil society organisations (CSOs), want to throw the gauntlet down to Najib to extend his programme of reform to all aspects of life in the country, especially in the critical sphere of good governance.

First of all, we laud the various measures of economic reform announced lately by the Government. While these bold measures will help liberalise our economy to meet the challenge of globalisation, the structural roots of economic stagnation – namely, ethno-nationalism, cronyism, corruption and power abuse – are the major constraints and must be addressed if the country is to make any headway. At the same time, other economic reforms to close the income and wealth gap between the rich and the poor, and reforms aimed at ensuring environmental sustainability that do not deprive future generations also need urgent attention.

Most important of all is the need for reforms that can ensure good governance. If the government insists on maintaining the current authoritarian system of political control, the economic liberalisation and other reforms will be seen for what it is – a thinly veiled attempt aimed at ensuring that the present political elite stays in power.

For the next 100 days of Najib’s leadership of the country,  we call on the Prime Minister to meet the following 10 Key Performance Indicators (KPIs) that can deepen the process of democratisation. We also call upon Tan Sri Dr Koh Tsu Koon, the Minister in the Prime Minister’s Department, and all Malaysians who are concerned with the establishment of a vibrant democratic system,  to join us in endorsing and monitoring the attainment of these KPIs.

Explanation – A host of unelected institutions – palace, judiciary, Attorney General’s Chambers, Elections Commission, police, bureaucracy, Malaysian Anti-Corruption Commission – have been dragged into this unconstitutional regime change. If this precedent is not reversed, what would happen during future elections if neither BN nor Pakatan Rakyat enjoys a comfortable majority?

KPI: Fresh elections for the State of Perak.

Assessment – still neither free nor fair

Explanation – Elections lacking integrity and credibility are a denial of our citizens’ democratic right.  They also reduce the competitiveness of electoral politics and also deprive the winner of legitimacy.  If unreformed, they could lead to political upheavals as has taken place in Iran and Thailand, recently

KPI: A Royal Commission on Electoral Reform before the next constituency redelineation exercise.

3. The Judiciary and the Prosecution

Assessment – still controlled by the executive

Explanation – The Judicial Appointment Commission is controlled by the Prime Minister, making the recent reform a farce. Judicial power in the pre-1998 Article 121(1) of the Federal Constitution has still not been restored. The Attorney General (AG) both controls the prosecution and advises the federal government, resulting in a fatal conflict of interest. The AG also controls both deputy public prosecutors and lower court judges.

KPI: A Parliamentary Select Committee on Judiciary and Prosecution Reform

Assessment – still controlled by the executive

Explanation – There is no sharing of legislative leadership at both the house and committee levels. Opposition parliamentarians are thrown out almost on daily basis. There is no provision for the role of an Opposition’s Shadow Cabinet.

Explanation – Allowing detention without trial and other violations of human rights is unacceptable to any  civilised society.

KPI: The repeal of ISA, with no new laws allowing detention without trial

Explanation – The police still arrest innocent citizens without clear justification. Detainees continue to die in police custody due to unacceptable reasons. At the same time, crime rates have soared higher.

Explanation – The media remains tightly controlled via laws and regulations curbing free speech and restricting dissenting views. Secondly, entry barrier in the print and broadcast media has resulted in monopolistic control by BN interests. There is no independent public service media like the British Broadcasting Corporation (BBC).

Explanation – Information vital for public interests is normally classified under the Official Secrets Act (OSA).  This has hindered transparency and accountability and also resulted in widespread opportunities for corruption and mismanagement. While Selangor is initiating its own FOI law, nothing is happening at the federal level or in other states.

KPI: FOI laws at both the Federal and State levels

Explanation – No taxation without representation. Local governments should not be the appointed handmaidens of the government in power and must be elected to have any political legitimacy.

Explanation – Like its predecessor the Anti-Corruption Agency (ACA), the MACC is still controlled by the Executive and has no independent power to prosecute. Hence, it remains the tool of the Executive to eliminate political opponents rather than an independent institution that is truly combating corruption.

Thomas Jefferson, a founding father of the United States, divided leaders into two types: those who do not trust the people and believe they know best; and those who believe that the people are the government’s best guide to public interest.

Najib should recognise that political and economic freedoms go hand-in-hand.  Economic reform will not work if there is a coercive political environment built on the suppression and denial of the citizens’ democratic rights.

We hope that Najib will implement the proposed KPIs above and in this way leave the right legacy for the country. Only through his commitment to a genuine and holistic reform programme that includes democratisation will our PM be able to earn the full respect and support of  the people and leave his mark on Malaysian history 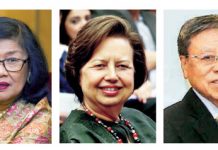