You don’t need a fortune teller to tell you how the media will perform in the run-up to the general election: ‘Tis the season when the media turn into propaganda tools of the ruling coalition, says Mustafa K Anuar.

t’s that time of the year. You can tell when you flip through the carbon-etched pages of the mainstream newspapers or the normally predictable news bulletin on your television set.

The polls date has not been officially declared, but the ‘soft campaigning’ is already underway judging from the reportage of polls preparations by the incumbent BN parties and the so-called news analyses that are presented to the readers.

Let’s look into our crystal ball to see what the mainstream media hold for us as the polls draw closer. Apart from the usual crime stories of children being kidnapped, women murdered and raped, and houses burgled, there lurks yet another series of ‘feel good’ reports and analyses. Such reports could be about the upbeat tempo of the stock markets and the promising economic forecasts for the country.

No doubt the media will invariably remind us – especially those with short memories – of the ruling coalition’s past achievements in the economy, national development and ‘political stability’. They will present an array of such achievements – while glossing over certain policy and development failures associated with the ruling coalition. In short, the media will display very little, if any, intellectual and political independence in assessing the BN-led government’s past performance.

Soon after the polling date is announced, the incumbent BN will announce its manifesto, which would then get full media coverage. You would be lucky if the manifesto of the Opposition receives a mere mention in the mainstream media.

Another regular feature of the general election and of the mainstream media is the reported ‘exodus’ of members leaving various opposition parties for the greener pastures of the BN component parties. Sometimes the number of people involved is difficult to verify especially if the figures of people fleeing those parties exceed those of the particular party branch to which they are supposed to belong. Normally these ‘liberated’ people would be given ample coverage by the mainstream media. But it doesn’t work quite the same way, though, if and when some BN component party members were to defect to the opposition camp.

The ruling leaders will tell us – and all these would be reported lock, stock and barrel – that development is crucial for ‘all Malaysians’ and therefore they cannot afford to ‘experiment’ with the Opposition nor gamble their children’s future away. And it is here that the ruling parties and their leaders will be projected as a group that is ideologically and materially no different from ordinary Malaysians. This could be done through, for instance, the conscious choice of inclusive terms on the part of BN party leaders such as ‘ours’, ‘us’, and ‘we’. Thus, for instance, “we all must work together for the betterment of our beloved country”.

It is in this context that the spectre of the May 13 riots will probably be evoked by government leaders to ensure that ordinary Malaysians appreciate that the socio-economic progress and national security must be placed in the purportedly safe hands of the incumbent BN leaders.

In fact, a top mainstream newspaper editor has even gone to the extent of cajoling readers to prioritise issues of socio-economic development and security at the expense of the otherwise equally important concerns of human rights and democracy.

So expect a regular news diet of ruling party politicians dishing out goodies such as sarongs, sewing machines and bicycles to rural folks (while ignoring the fact that public transport is still not up to mark). And, lo and behold, these activities will be conducted under the constant gaze of the mainstream media, which will then dutifully highlight the politicians’ benevolence towards ordinary Malaysians.

Then, there will be the usual pumping of the flesh, conducted by ministers in their so-called tour of duty, rubbing shoulders – not with the rich and powerful – but with the ordinary Azmawati, Ah Kok and Athimmulai. These politicians will of course kiss and pat toddlers to show how caring they are..

We can also expect certain ‘government activities’ to double up as party campaigning endeavours, and these will certainly gain media mileage for the ruling politicians. There may be a conflict of interests and questions of ethics involved here. This is one area the Elections Commission cannot turn a blind eye to.

These are some of the activities that will ensure a high profile for incumbent politicians in the eyes of the public.

The opposition, too, will get an airing from the mainstream media – but often for the wrong reasons. For instance, the squabbles between opposition parties almost always gets automatic media attention. This is not to deny the existence of such conflicts within opposition ranks just as there are similar tensions among the ruling parties themselves.

But the quarrels within the opposition parties will be magnified so that the parties are stigmatised and subject to public ridicule. The opposition parties in question are not likely to be accorded the opportunity to respond to these portrayals in violation of their right to reply. This right is often not observed by the media especially if the aggrieved parties are individuals and groups critical of the ruling elite.

In short, the media reporting of opposition parties will probably be aimed at smearing their public image and subjecting them to public mockery.

In contrast, the media’s coverage of the ruling parties predictably will take the form of  singing praises for the BN. Not surprisingly, it will also include political endorsements of the BN via paid advertisements and news reports coming from certain celebrities, well-known personalities as well as ordinary people who are projected as ‘representing’ the hopes and wishes of the entire ‘imagined community’ of Malaysians. Certain letters will be highlighted in the Letters to the Editor column, giving unqualified support to the incumbent parties.

READ MORE:  Media are not agents for 'cheap publicity'

But it’s not all ‘dry’ stuff, this campaigning via the media. There will be cartoons and caricatures published by the mainstream press, depicting, for example, the ‘unholy alliance’ among the various parties in the opposition pacts. The idea is to show how politically unreliable these parties – and the people behind them – are.

Thus, looking into our crystal balls – and going by experience – we can predict that the election will most likely be marred by unfair and unjust mainstream media to give the ruling coalition parties an edge over their political rivals.

Such lopsided coverage would also violate the people’s right to obtain adequate information (about all contesting political parties) from the media and the opposition parties’ right to fair access to the media.

Unfortunately, this would only show the world how far we fall short in upholding democratic norms in the conduct of a free and fair election.

Media are not agents for ‘cheap publicity’ 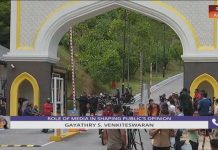 Forum in KL: The reform agenda – Are we on track?