Tony Pua takes a close-up look at one of the Hindraf Five, V Ganabathirau, and discovers not a racist, but a concerned Malaysian who has selflessly sacrificed a lot in his quest for a better, more just Malaysia for all Malaysians.

There appears to be plenty of such sad and black days in recent weeks. Who would have thought that the seemingly genial Prime Minister, Abdullah Badawi, when he took over the reigns of the government could have been such an incompetent, uninspiring, sleeping and heartless leader?

But enough about Abdullah. Now, I’d just like to provide a little more insight into one of those arrested, a little known unsung hero, 34-year-old lawyer V Ganabathirau, who hit the limelight recently as one of the core leaders of Hindraf.

As you may have read in the press, Gana is a DAP member. What makes the whole ugly episode we witnessed close to me, is that Gana is a member of the DAP Damansara branch, of which I’m the chairperson. Gana joined me in March 2007 and subsequently helped form the Taman Muda branch in Shah Alam, of which he is the advisor.

Having known him for the past 8 months or so, I can’t claim to know him inside out. But there are some things which I will vouch for him with my life.

Gana is not a racist. He is not a religious fanatic and neither is he in any way at all a terrorist as he is insinuated to be. Having known him well in recent months, I believe he is the complete opposite of what the Abdullah administration, through the mainstream mouthpieces, would like to paint him out to be.

Gana is a full-blooded Malaysian who strongly believes that all Malaysians regardless of ethnicity must have equal opportunities to succeed. While some may quibble over the fact that Hindraf could have taken a greater multi-racial outlook in its position, no right-thinking Malaysian will deny that the overwhelming majority of Indian Malaysians in this country are severely marginalised and live below or near the poverty line.

The way politics in Malaysia is framed now, it is unsurprising that Indian Malaysians found themselves having to stand up and be counted. They really have nothing else to lose.

Some will argue that I can afford to spend some time on politics today because I’ve made some money after having sold my company. But Gana, despite having just started his own fledgling law firm, found himself travelling frequently (at least weekly) between Teluk Intan, his hometown, and Shah Alam, where he now lives, to provide community service to the needy and unfortunate. He even rented and refurbished a service centre in Teluk Intan with his own money to carry out his work.

When I received cases at my own service centre in Damansara Utama and was in need of legal services to assist the complainants, Gana offered his with absolutely no hesitation. For example, there was a group of seven contractors who failed to receive payment from a housing developer. Gana took up their case and offered legal advise pro bono. When legal action was required, I actually had to convince him to accept some payment from these contractors! Guess what? These contractors were all Chinese Malaysians but race, as should be the case for all right-thinking Malaysians, never ever came into the picture.

Gana, the youngest of three brothers, is a son that would have made any family proud. He belongs to the Indian Malaysian Telugu community and grew up in a poor family which just about made enough to survive. Gana never had the privilege of completing his education at one go. After finishing Form Five, he had to take up various odd jobs to support himself and his family.

That, however, did not prevent him from investing his earnings and taking up part-time courses to pursue his ambition of becoming an officer of the court. His dream came true in his late twenties when he graduated with a law degree from the University of London external programme. He plied his trade as a legal assistant with a law firm in Teluk Intan before saving enough to set up his own firm, having moved to Shah Alam late last year.

But all this while, he held political ambitions – not to further enrich himself by illegal and unethical means, but to play a part in the betterment of his marginalised community as well as Malaysians in general. Having set up his own firm, he had the flexibility, for better or worse, to spend time on social and political causes. And he did it with all his heart and soul.

Gana was married not too long ago to a school-teacher. On Merdeka day this year, the couple had their first child – a girl – now barely four months old. If Abdullah has his way, by the time Gana is released from ISA detention, his daughter would be more than two years old. When Gana first pointed out his wife to me, she was seated in the court stands while he was being charged with sedition at the Klang Sessions Court, and you could see tears welling in her eyes. Her fears have unfortunately come true.

Gana told me that his wife is a former Tamil school debater who is very politically aware. In fact, in the earlier years, she used to tease him that he only knew how to “talk” politics but never got his hands dirty. More recently, however, she would half-jokingly tell him that she regretted having ever encouraged him to join the fight for a just cause.

Gana is a good man. He has sacrificed selflessly to help create a better Malaysia for all Malaysians, particularly the underprivileged and marginalised community. He rose quickly to prominence through sheer tenacity, hard work, eloquence and dedication to the cause. Thirty thousand Indian Malaysians from all parts of the country walked the streets of Kuala Lumpur not because they had nothing better to do, but because they shared his cause and believed that “enough is enough!”

For that, Abdullah, who is clearly unable to hear, accept and deal with the truth, invoked the draconian ISA in the hope of sweeping everything under the carpet.

Thankfully, Gana has kind and loving family members, who will help to take care of the needs of his wife and their child. The DAP, as announced by the party secretary-general, will be setting up a fund to assist the families of those who have been detained without trial.

My eyes were moist as I wrote this post. I firmly believe that Gana will be a stronger man post-detention. You would not have heard the last of him for a long time yet. I expect him to be a future leader of this country, a rare breed of the much-needed righteous, caring, intelligent and dedicated kind, who will only contribute immensely to creating a better Malaysia for future generations. His personal sacrifices must not and will not be in vain.

Tony Pua, a former CEO and founder of a listed IT company, is Economic Advisor to the DAP Secretary General.

How passion against injustice led a Catholic brother to Kamunting 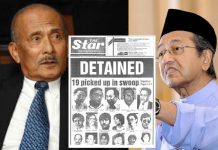 Operation Lalang and after (video)