Khoo Boo Teik comments on how Umno got lost on the way to 2020.  If the goal is 100 per cent national unity, the Umno of 2006 has taken us 30 per cent forward, 70 per cent backward.  As we prepare to celebrate 50 Years of Merdeka, we must look elsewhere for a better, kinder and fairer idea of progress.

Those who had their eyes, ears, heads, and hearts assailed by the live tele-cast of the Umno General Assembly last month may be driven to find some balm in the following words:

Today we have Malays and Bumiputera as heads of departments, scientists, actuaries, nuclear physicists, surgeons, experts in the fields of medicine and aviation, bankers and corporate leaders. In fact, some are already managers of major conglome-rates worth billions of ringgit and able to acquire bigger companies in the open market or participate in mergers and acquisitions which are complex and sophisticated.

Thus spoke Tun Dr Mahathir Mohamad with undisguised pride in Malay attainments after a lifetime’s anxiety that to be Malay was to be backward.

Yet his anxiety was never fully assuaged. He left office warning of a ‘second Malay dilemma’, downcast at the thought that he and the Malays had let each other down.

But his sense of pride, even though it came before the fall in July 1997, must have been alien to the delegates who made up Umno’s General Assembly last month.

In Mahathir’s absence – better than a voiceless attendance, I’d think were I a Mahathir loyalist – the delegates merrily outdid one another in telling the world, or whoever would listen, that the Malays were ‘behind’, ‘still behind’, ‘lagging behind’, victims yet again of others who live in this country and in the same heartless world, ad nauseam.

Perhaps only in that manner could they persuade themselves that they weren’t being comical in their so-called debates on the only communalist agenda openly promoted without a hint of embarrassment in this nation.

It’s just as well that Mahathir uttered those words, cited above, at the Umno General Assembly of November 1993, in a time and mood that now seems ages ago.

Recalling those words, and looking at the recent Assembly, one sees how far Umno has subverted its own once proud and somewhat credible claim to spearhead nation-building.

In 1993, Mahathir’s Wawasan 2020 had resonated across Malaysian society, valorised by the prosperity that interacted with a huge surge on the Kuala Lumpur Stock Exchange. The National Development Policy had officially replaced the NEP, and a unifying dream of Bangsa Malaysia made it appear that the future was ours.

The same year, Anwar Ibrahim and his ‘Wawasan Team’ swept Ghafar Baba, Abdullah Badawi and Sanusi Junid from Umno’s leadership. In a reflection of the shared hopes of the time, the ‘anointed successor’ paid a tri-bute to our multiculturalism: ‘Wo men dou shi yi jia ren’ (‘We are one family’).

What of Umno today?

At the pre-Assembly Johor Umno Convention, Abdul Ghani Othman and Johor Umno poin-tedly denied that there could ever be a Bangsa Malaysia. No less than Najib Tun Razak thought it such an original thing to say he couldn’t find ‘Bangsa Malaysia’ in the Constitution. (No one can, but what’s his point? Can he find ‘Malay supremacy’ in the Constitution?)

Then followed a twist: Bangsa Malaysia was only a ‘state of mind’. (Really, and who would have known the state of Mahathir’s mind then, or at any other time?)

But that sort of attitude, always scanning for the remotest ‘threat’, ‘insult’ or ‘disrespect’ to the ‘special position of the Malays’, would allow one to cannibalise any vision so as to discard what’s politically inconvenient, save what’s expedient, and attach it to whatever serves one’s interests.

Take the NEP’s original ‘two prongs’. Delegates at the Assembly barely paid lip service to the first prong of ‘poverty eradication irrespective of race’. They endlessly highlighted the second prong of ‘restructuring’. They loosely linked quotas and figures to whatever struck their fancy.

We shouldn’t fall for Umno’s good cop-bad cop routine by turning to its rowdies to illustrate the point.

Look at Najib. Whereas the Outline Perspective Plan of the Second Malaysia Plan, bearing his father’s imprint, specified a span of 20 years, Najib said there was ‘no time frame’ to NEP’s restructuring.

Listen to the words of the callow Khairy Jamaludin: ‘What if I say we accept the [Asli report’s] 45 per cent figure and having accepted it, we ask for 70 per cent?’

Umno claims to be faithful to ‘the Old Man’s vision’. However, its delegates would only find the goal of ‘developed country status’ seductive. They would reject its Bangsa Malaysia social base as repulsive – a ‘rojak of races’, Ghani Othman had called it.

Those are ways to mangle NEP and Wawasan 2020 into forms that one can love to have and to hold.

The result is to peddle a sort of wawasan potong (cut vision) that, like a kereta potong (cut car), is cheap to assemble, difficult to maintain, and fraudulent to sell.

It’s this pathetic shrinkage of Umno’s ‘vision’, rather than whether certain speeches and particular antics were seditious or offensive, that exposed the noisome and wearisome tone of the recent Assembly.

After the Assembly, many people within Umno, BN and the mainstream media fell over themselves applauding Prime Minister Abdullah Badawi for ‘speaking for all of us’, in Lim Kheng Yaik’s words.

READ MORE:  Flashback: 'No way!' We will never go back to Umno - Muhyiddin

But was it the height of firmness, openness and statesmanship to ‘advise’ one’s henchmen on their provocative capers but frown on Mukhriz Mahathir’s mildest of murmurs on the President’s speech?

In any case, all that was called ‘damage control’ came too little too late.

Like it or not, we are globally connected. At least three things would have told newspaper readers, television viewers, internet surfers and bloggers across the world that Umno’s self-proclaimed capacity to ‘speak for all races’ was hollow.

First was the arrogance to which the son of the humble Tun Hussein Onn repeatedly gave voice: ‘Do not challenge us.’ That puerile attitude, which belied all talk of transparency, openness and democratic discourse, was grounded in Umno’s unique nation-building notion of ‘Malay supremacy’.

Besides, there would have been this assessment of Umno’s post-Mahathir strength: Pas is beaten and Umno has recovered its Malay vote. Hence, the non-Malays, who saved Mahathir in 1999 and backed Abdullah in 2004, can once more serve as bogeyman and scapegoat in Umno’s demonology. They can be told to lump it if they feel let down by a resurgence of ‘Malay supremacy’.

Second was desperation. Umno had had a difficult year. Sharp rises in petrol and diesel prices following the fifth ‘fuel subsidy reduction’ since 1 May 2004 sparked protracted protests. Islam Hadhari or no, cases of religious conflicts emerged. These involved intra-Muslim as much as inter-religious discord, leaving the nation trying to look moderate abroad but looking more extremist at home.

Scandals involving the party elite broke out at different levels in different locations. Leaders contradicted one another on policy matters, ranging from language to ‘meritocracy’ to the economy.

Malays of different political persuasions, from Anwar Ibrahim to M Bakri Musa, had called for an end to NEP. Others had criticised the widening intra-Malay inequalities, uncorrected economic inefficiencies and lack of leadership.

Above all, a real threat to Umno-government-Malay unity loomed as Mahathir’s unresolved spat with Abdullah compelled the latter to deny that he would be a one-term Prime Minister.

At the Assembly, Abdullah referred to these problems in passing. Over these problems, however, the delegates conducted no debate worth recalling. Avoiding those issues, before and during the Assembly, Umno leaders could merely urge ‘Malay unity’ by contriving diversionary ethnic squabbles where these didn’t actually exist.

Third was the state of the party. The delegates vowed to guard ‘Malay unity’, uphold ‘Malay supremacy’ and pursue their special brand of a ‘Malay agenda’ – but against whom?

There was no plausible non-Malay or non-Muslim threat. Only a supreme opportunist or someone unhinged from reality would claim that the Malays or Muslims were under siege in Malaysia.

In fact, the ‘threat’ is stark, simple and internal. Practically all the major political crises since the late 1970s have been intra-Malay crises. And the most severe of those were intra-Umno crises.

Only in this highly racialised political system could the Assembly have regarded its preoccupation with Malayness as a sign of UMNO’s strength!

Elsewhere in the world, it would have been diagnosed as a classic symptom of the ideological and moral exhaustion of a ruling party incapable of reinventing itself.

Goodbye to all that

It is no coincidence that the aggressive-pathetic face of Umno’s agenda, on view during the general assemblies of 2004–2006, resurfaced after Mahathir’s departure and in Anwar’s absence.

There’s no reason to idealise Mahathir or Anwar.

Mahathir’s legacy includes weaknesses and mistakes that adversely affected the fortunes of not just Umno’s delegates but a lot of common people. In Umno, Anwar was also vociferous, especially when he was Umno Youth President, although he was never so crass as to kiss a keris.

Even so, Mahathir showed that Malaysian society could reorient itself so that ‘the races stopped looking inwards with prejudice but rather outwards with pride’, to use a phrase from the late K Das.

Even now, Anwar hasn’t disavowed the multiculturalism he espoused before his fall. He rejects the cronyism and the corruption justified in the name of NEP – but supports the original NEP’s first prong of ‘poverty eradication irrespective of race’.

Umno today is stuck in time and ideological warps – between the 20th and 21st centuries, between an interrupted project of a ‘developed’ Bangsa Malaysia and an imperfect multi-ethnic opposition.

Given its insecure mindset, its fatuous love of the numbers game, and its half-hearted refrains about leakages, if the goal is 100 per cent national unity, the Umno of 2006 may fairly be said to have gone 30 per cent forward only to slip 70 per cent back.

The Malaysian nation, on the eve of the 50th anniversary of Merdeka, must look elsewhere for a better, kinder and fairer idea of progress.

Justice was never won without personal sacrifice – whether measured in time volunteered, energy devoted to a cause, or financial support generously given. We need your support in our struggle for justice. Your contribution no matter how small will be like a droplet that builds up into a wave of change.  Click here if you would like to contribute financially.

The left, the centre and the right should together control Malaysian politics 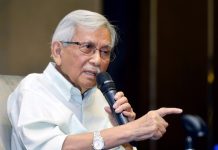