Veteran unionist K George sadly reports that a group of five unions led by Abdul Razak Hassan of the Railwaymen’s Union of Malaysia is planning to split from the MTUC. They are aligned to Zainal Rampak who lost in the tussle for the MTUC’s leadership. With unionists like these, no wonder membership is falling. Dialogue is the answer to their difference, not a splinter movement, which will only weaken the labour movement.

Media reports on 14 March 2006 disclosed that a “splinter group” of trade unions are planning to form an organization to rival the Malaysian Trades Union Congress (MTUC). Presently four (4) unions are involved. The leaders of those four unions had a meeting with the Minister of Human Resources, Dr. Fong Chan Onn. The meeting lasted 15 minutes. What transpired at the meeting remains unclear. The Minister who held a press conference immediately after the meeting, advised the unions concerned and the MTUC to resolve the conflict peacefully. He added: “The MTUC is like one family and should remain united to take care of the workers”.

Apparently the MTUC’s “splinter group” involves five unions and is led by Mr. Abdul Razak Hassan, who is the President of the Railwaymen’s Union of Malaysia (RUM). He was one of the Vice-Presidents of the MTUC. He contested the same position together with the then president, Mr. Zainal Rampak and other candidates chosen by Zainal at the MTUC election held in December 2004. All of them were defeated.

Zainal goes back on his word

Zainal was the president of MTUC for a long period of 19 years. He was well-respected and held the coveted position as a Member of the Governing Body of the International Labour Organisation (ILO). His mentor was the late Dr. V. David, who was the General Secretary of the Transport Workers Union (TWU) and Zainal was his deputy. For some years Zainal and David were the President and Secretary General respectively of the MTUC. Subsequently Zainal became Secretary General and later President of the MTUC during the leadership of Bro P.P.Narayanan.

Both of them used to be members of opposition political parties – such as the Labour Pary, Gerakan, Pekemas, DAP and finally Semangat 46 (Zainal alone). Both used to contest contest in the Parliamentary elections. While David had won most of the contests, Zainal was always unlucky. It was unfortunate that Zainal could not win even once.

Deliberate breach of a written agreement by Zainal brought discredit to his position as Malaysia’s No. 1 Union leader by virtue of the fact that he was the president of Malaysia’s one and only Labour Centre – the MTUC. To avoid a split in the MTUC, Zainal signed an agreement with his deputy president, Mohd. Shafie BP Mohamud that he would vacate the presidency in favour of his deputy at the end of one year.  This arrangement paved the way for Zainal to be elected without a contest. But when the time came, Zainal refused to quit. It was most dishonourable of him not to have honoured his written agreement. Zainal even disregarded the fact that he himself had signed the same sort of agreement with his predecessor, the late Bro. P.P. Narayanan, who stepped down honourably according to the agreement reached between them. This breach brought Zainal disgrace and discredited the MTUC.

It is clear the protem leader of the splinter group is Mr. Abdul Razak, the president of RUM. When I was a union activist decades ago, I was very closely associated with RUM. When the 9,000 RUM members resorted to industrial action in pursuit of the claim to convert daily rated workers to monthly rated employees, the entire trade union movement rendered their support. In spite of the fact that the RUM was not an affiliate of CUEPACS at that time, its leaders not only supported the strikes but also took part in negotiations. Twenty-two (22) days of struggle and sacrifice; unity and solidarity resulted in success. History was created. In due course of time, the entire daily rated workers in the public sector became employees with monthly salary and also pensionable.

The splinter group claims they have the support of 20 unions out of the 500 over unions in this country. About 300 unions or so are affiliated to the MTUC. Razak claims the MTUC has not been effective in resolving the problems of workers.

Zainal Rampak says MTUC has not brought any reform for workers. He also said that he was not involved in the conspiracy to form the splinter group but stated that the TWU would join the rival organization if it is formed. I refuse to buy it because, according to reliable sources, the meeting of the splinter group was held in his union office. It is my considered view that Zainal is the brain behind the conspiracy.

May I also ask Zainal and Razak what reforms they have brought during the long 19 years that Zainal was the chief of the MTUC? What reforms are they talking about? Instead of being vague they should be specific. We have a right to know what prevented them from bringing about these “reforms” during their long tenure of office.

The MTUC, formed in 1949 was a founding member of the International Confederation of Free Trade Unions (ICFTU). It has been maintaining very cordial relations with all the International Trade Union Secretariats. The Secretary General of the MTUC, G. Rajasekaran is presently the Chairman of the ICFTU Asian and Pacific Region which invariably means that Malaysia’s National Labour Centre has been credited with recognition by international workers organizations.

Yet in 1989, the General Secretary of the National Union of Bank Employees (NUBE) Mr. Shanmugam formed a rival organization known as the Malaysian Labour Organisation (MLO) with the support of Dr. Mahathir Mohamad, the fourth prime minister. The MLO closed down in 1996.

A few years before Shanmugam’s adventure, a very prominent trade union leader succeeded in getting a few unions to disaffiliate from the MTUC just because he had a small grouse with a MTUC leader. However, his efforts to set up a rival National Labour Centre met with total failure.

Presently, the MTUC is involved in persuading the government not to privatize Health Care and Water and Rivers in collaboration with more than one hundred other groups and NGOs. Numerous organizations including the MTUC are putting pressure on the government to withdraw the 30 sen fuel hike. Razak, if you are really committed to the struggle for the emancipation of the workers; if you believe that the unity and solidarity of the working people is vital for the success of our struggle; if your experience has convinced you that DIALOGUE should be the first step to resolving problems, then you should respond positively to the call by the MTUC President Syed Shahrir for discussion and also heed the advice by the Minister of Human Resources. The ball is in your court now. 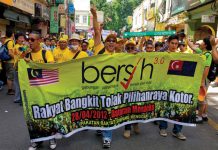