The opposition coalition must face up to fact that Malay support for Pakatan declined between 2008 and 2013 and address the concerns of rural voters, says Jeyakumar Devaraj.

A few days ago, at a PSM press conference, I opined that the opposition should not take the people’s continued support for granted.

I predicted that the BN will not only hold on to Putrajaya, but might also regain its two-thirds majority in the Dewan Rakyat. My reasons for fearing this include:

The standard PR spiel about GE13 is that the election was stolen from the opposition by a combination of favouritism on the part of the Elections Commission, ballot stuffing and the introduction of mysterious additional ballot boxes at the main counting centres, large number of illegal Bangladesh voters, etc.

Why didn’t this affect the urban votes? The truth is, if the support of the rural Malay voters in Peninsular Malaysia had remained at 2008 levels, Anwar Ibrahim would now be in Putrajaya not Sungai Buloh. (Of the 71 seats won with a less than 10% majority, 43 were won by the BN. So 89 + 43 = 132 = Putrajaya.)

So why did rural Malay support decline for the PR? Why were the rural Malays more susceptible to BN propaganda? I would have thought that this should be a burning issue that the leaders of the opposition focus on, analyse and come to some consensus as to how to deal with.

But we are not seeing this. The best minds in the PR seem to be focusing on corruption in Umno – and there is certainly a lot to talk about that.

But would those kinds of expose spur the rural makciks and pakciks to vote opposition? I think rural Malays are aware of corruption and misuse of power by Umno. But clearly, for them, a corrupt Umno is a safer bet than the PR. Why?

Some individuals outside the PR have suggested some very plausible reasons. Dr Wong Chin Huat has argued that the PR has not yet clearly articulated how it is going to deal with rural Malay poverty. The BN system of subsidies and provision of infrastructure has not resolved the problem.

If the PR proceeds to cut back on NEP-type programmes (what some Malays fear will happen if the PR takes over), wouldn’t the Malay poor in the country side be worse off? This, argues Chin Huat, is one major cause of Malay anxiety regarding regime change (Wong Chin Huat, PSM Congress, 13 June 2015).

I agree fully with Chin Huat on this. Until the opposition elevates the issue of persistent rural poverty as a central issue that the opposition is committed to resolve, we can say goodbye to rural Malay voters in GE14, and given the extra weightage of rural seats, it is quite a big number!

Causes of rural poverty among Malays

Among my key findings were:

The major cause for this state of affairs is something is termed “the army of the unemployed”. The existence of 3.5m undocumented foreign workers in Malaysia drives down the wage floor in addition to creating underemployment.

A local trying to get a job as an agricultural labourer would have to settle for rates that the “Pati” (immigrants without documents) agree to – ie around RM700 per day with overtime at the 1.0 rate. I expanded on this point in some detail in my Budget 2016 speech in November 2015. (BM original is in the Koleksi Perbahasan Ahli Parlimen Sungai Siput, which is available at PSM HQ Brickfields.)

Another cause of rural Malay poverty is the persistence of a feudal culture that aids and abets those who are continuously siphoning off funds meant for poverty alleviation into their and their crony-partners’ pockets.

The government allocates more than RM15bn per year for poverty eradication in rural areas as follows:

Unfortunately, the manner in which this aid is given is opaque. The rural poor, the target population, may not be informed of the actual allocation for the project in their kampong, its actual specifications, the quantum of the contracts awarded, etc. The poor communities are not in any position to monitor the execution of these projects.

In the absence of proper checks and balances, officers from the ministry concerned, the local district officer and his/her staff, the politically connected contractors and the local Umno Adun and member of parliament collectively may have the opportunity to siphon off a significant portion of the funds allocated.

This portion could come up to 50% of the actual sum allocated if checks and balances are absent. The irony of it is that the rural folk being “helped” turn up for the launch of these projects and quite literally kiss the hands of the parties who may be robbing them of the full share of the allocation.

– for this is the primary cause of both the underemployment and low wages in the bottom 40% of the population of all races. The factors that turn foreign workers into undocumented workers (Pati) must be understood. Xenophobic emotionalism has to be avoided. (Please refer to my Budget 2016 speech – I deal with it in some detail there.

a. Ensure right to redress for foreign workers. It is because they cannot fight back, and at the same time, their need to send money home before returning leads them to go underground and become Pati.

Solution: The moment they are dismissed because of complaining to the Labour Department, they should automatically get a pass that allows them to find another employer in the same sector.

b. Get tough on employers who employ Pati. At present, the Pati are flogged but the employers allegedly pay their way out.

c. Point “b” will impact very negatively on the roughly 100,000 refugees in Malaysia. At present, almost all of them are working in the black economy as Malaysia refuses to recognise them as refugees but groups them with the economic migrants as Pati. The PSM’s suggestion is that refugees should be recognised and registered as refugees and allowed to work legally. What is 100,000 refugees compared to the 2m documented foreign workers?

The above two measures will not be popular among businessmen. But they are crucial to the solution of rural poverty. Are the opposition parties prepared to take this stand?

Rubber smallholders should be encouraged and helped to diversify to fruit cultivation and animal husbandry as the price of rubber in the world market is likely to remain low.

The market for fruit has to be developed further by exploring technology to can or otherwise preserve our fruits for both the Malaysian as well as the export market.

And this should be coupled with a guarantee that the current level of budgetary allocations for the rural poor will be maintained under a PR federal government. But now, much more will go to the people as corruption and cronyism would be brought under better control.

The following should be done:

At present the district officer and the Umno Adun appoint the ketua kampungs. But these two are the persons who have the opportunity to pilfer funds meant for the kampung. Ketua kampungs who owe their position to the kampong folk will be in a stronger position to play the role of checks and balances regarding funds for poor rural communities.

These two policy positions would be hugely popular with the kampung people, especially those below 60. It would help ensure that opposition politicians do not degenerate into BN types after a few years in power.

Tackle the problem of poor social protection in old age

The Pakatan should announce old age pensions of RM200 per month for all Malaysian citizens and red IC holders above 70. Only those receiving government pension or Socso pension should be excluded from the scheme. This would be very popular among all social classes. Its cost would be about RM200 X 12 months x 800,000 people above 70 = RM1.92bn.

Finally, the Pakatan should state that the privatisation of public services  will be stopped

There could be more ideas in the policy mix that we, the opposition, could present to the rural poor in particular and to the Malaysian public generally. I hope these brief notes will stimulate an in-depth discussion among opposition parties as well as individuals and NGOs who are really interested in ushering regime change in Malaysia.

We should only make these promises if we seriously intend to implement them if we win. It is an important discussion if the opposition wishes to avoid a great setback in GE14, which the BN will probably call within a year of retiring Najib.

That day may not be very far off – the recent suspension of Muhyiddin could be the death knell for Najib’s premiership. 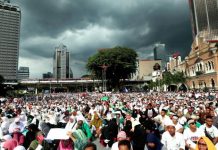 ‘Disappointing’ anti-ICERD rally – and the ‘scramble for Malays’

My ideas may come across of as cynical. Nonetheless, here they are, for whatever they are worth.

I know for a fact that Dr Jeyakumar Devaraj is an entirely different kind of politician and that any help given to him will be well placed. I say this after having spent most of my 66 years observing politicians and their likes.

I believe most of these so-called politicians are as selfish as they come. They are very great at looking after Number 1 and no more. So, for most of them, when they stand for election, all others may lose, but they alone must win. That is the over-riding “principle” in their stupid lives.

I do not believe they will care for any other thing beside this, much less will they care for the welfare of their fellow men.

This is a good start to go-rural in seeking positive change in Malaysian politics. It should take into view the economic model that bankrupt rural economy in the first place so that rural people will be more self-sufficient and therefore less beholden to the state for subsidies and support. A more diversified food agriculture policy will reduce our mammoth and ballooning food import/deficit and keep agriculture jobs-and allow rural folks to have something to exchange for imports from urban manufactures. There should be a better balance between cash crop plantation (which depend on fluctuating commodity prices out of local control) and food agriculture. Note that very few countries take the Malaysian route of jettisoning food agriculture and put all hopes on earning from manufacturing & industrialisation. Not even the advance economies do that. Secondly there is a lack of rural profile and concern from the urban centred Opposition and civil society-thus its lack of ideas on what to offer to the rural folks. Thirdly the article totally ignore the indigenous voters who already find themselves in playing the indispensable balancing role in Malaysian politics since 2008.… Read more »