The BN is taking serious precautions to remain in power by imposing repressive laws after it narrowly escaped being consigned to opposition ranks at GE13, says P Ramakrishnan.

The Barisan Nasional had a rude shock following GE13. Though Umno did slightly better in GE13 compared to GE 12, the performance of the BN as a whole must have been an eye-opener. The slide that started with GE12 continued at GE13.

All the money and goodies that were lavishly thrown at the electorate failed to win the BN more seats. It was down by seven seats, from 140 to 133. Voters were smarter and they knew that the money did not come from BN coffers for them to be grateful to the BN.

The abuse of government machinery, the biased conduct of the Election Commission, the glaring bribery, the terrible one-sided terrible reporting by the TV and radio, the unabashed, shameful distortion of the opposition by the mainstream media – all failed to improve the fortunes of the BN.

If there was fairness and justice in the conduct of the GE 13, the BN would be sitting in the opposition benches. It knows that it came very close to being condemned as the opposition. The narrow escape made the BN determined that it would not be consigned to that area at any time in the future.

But with this possibility staring at the BN, it had to take serious precautions. It is, therefore, laying the ground work to safeguard and preserve its position in Malaysian politics. Using its simple majority, it has decided to tighten on the screws on the opposition through corrosive and undemocratic laws to disable the opposition from functioning effectively.

Any outrageous and outlandish accusations could be made against anyone, especially when one has a bone to pick with an enemy. The false accuser’s identity is protected and the accused person will never know who had accused him – and worse, what he had been accused of. What better way to fix the leaders of the opposition!

When a law prevents the accused person from knowing the details of his so-called guilt and protects the identity of the accuser, how on earth can the accused person defend himself or prove his innocence? Is this the BN’s perception of the rule of law?

When a person who is the subject of an inquiry or a witness is not allowed the presence of his counsel to advise him or safeguard his rights, it is highly improper for the Inquiry Officer to have all the time with the person whom he is investigating without the presence of his advocate and solicitor

When the accused is referred to the Prevention of Crime Board, he can be ordered to be detained for two years which can be extended by further periods of two years. To make matters worse, the accused cannot appeal against his detention and he would not be told why he was found guilty. He would even be denied a judicial review with regard to the Board’s finding or decision.

Is this any different from the recently abolished Internal Security Act, which provided for detention without trial? Through deception the ISA is allowed to exist in a different form but the intention is still the same: no rule of law.

Instead of the Minister exercising his absolute power as was the case in the past, now that absolute discretion is passed on to the Board.

The whole process leading to the detention is apparently fraught with malice. It is undemocratic, unfair and an abuse of a person’s human rights. The only purpose for introducing this vile legislation is obviously to put away any politician who may be a serious threat to Umno and the BN in GE14.

While the above instances all refer to the dangers that opposition politician will have to face in their quest to take over the Federal Government at GE14, they are also denied the very information that has given them a high profile in the country. The scourge of corruption that continues to bedevil this country has always been a formidable weapon for the opposition to bash the BN.

Through leaked information of abuse of public facilities and corrupt practices, of mismanagement of our financial resources, of instances of conflict of interest, the opposition had exposed the excesses of the BN very effectively. Evidence concerning the National Feedlot Corporation, the Scorpene Scandal, the brutal Altantuya murder, etc that contained damning facts fell into the hands of the opposition. Because well-meaning civil servants were terribly disillusioned and disappointed with the disgraceful conduct of tBN ministers and politicians, incriminating information was secretly supplied to the opposition.

This disclosure of information embarrassed the BN and put it on the defensive. It is through this exposure that the opposition managed to win over the support of voters who realised it is a small coterie of politicians who have been hugely benefiting from national resources while pretending to look after the deprived and marginalised communities in our midst.

So to plug this leakage the BN has passed a law to make it unlawful for civil servants to disclose such information by imposing a hefty fine of RM1 million. With this heavy penalty, the BN hopes to stifle and muffle the opposition from having access to the various excesses and abuses of the BN.

The BN government is only interested in retaining power at all costs. Evidently it will resort to every means – even if they are undemocratic and violate the rule of law – to deny the opposition any opportunity to unseat them.

Under the BN, democracy will not flourish, the rule of law will not be respected, good governance will be alien to this country. They will always be an obstacle to the progress of democratic principles. 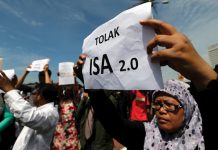 Where is the free internet as promised ???

There is no question that Umno is preparing for the 14th GE now especially when Najib and all the Umno warlords are cutting down on the many subsidies and implementing the new taxes a few years before the 14th GE. Thus hoping that the voters will not remember the pain and suffering this regime is responsible for but they forgot whatever they are doing they are only the minority voted government. Above all they will not be able to explain to the voters why many, if not all, the promises they made are not fulfilled,

I will for one will keep reminding Najib that he promised before the GE to build one million affordable for the people and yet to date none a single one of these houses is built ! And that is to show the kind of promises he and the Umno warlords and the candidates have promised plus to show to the voters the real faces of Umno !