The chance for a change at the federal government emerges once again at the forthcoming GE13.  Voters have a crucial role to play in deciding this, including women voters, says Prema Devaraj.

When Obama won the US presidential election last year, some political analysts spoke of him winning the women’s vote. He apparently won 55 per cent of the women’s vote. Well, what will the women’s vote mean to either the Barisan Nasional (BN) or the Pakatan Rakyat (PR) coalition at the 13th General Election in Malaysia?

Women make up half the population and also approximately half the registered voters i.e., 50.2 per cent of the voters or 6.58 million of a 13.1 million strong electorate2. For a change in federal government, technically, the coalition (BN or PR) which wins a simple majority of the 222 parliamentary seats will form the next government. Could women voters play a role in determining which coalition wins more seats? In Sarawak, for example, women form the majority of voters in 19 out of 31 parliamentary seats (www.the borneopost.com/2013/02/02/more-women-voters-in-19-parliamentary-seats-in-coming-13th-general-election). Would having more women voters in parliamentary constituencies make a difference?

How will women vote?

Women voters (just like male voters) are not a homogenous group. They have multiple layers of identities and represent a diversity of voters from a wide range of backgrounds, including differences in age, career, ethnicity, religious beliefs, political ideology, and socioeconomic standing, urban or rural location and so on.

So while the women’s vote is recognised as a strong block of votes, how women will vote is not that clear. It could depend on a variety of things including their political affiliations or how government policy has impacted on them or the type of information to which they have access.

Some political analysts say that fence-sitters (those undecided about their votes)—especially women working at home and the young — will be crucial in determining the results of the coming elections. These fence-sitters (especially those in rural or semi rural areas) might apparently determine who will win or lose partly because a large number of seats (in GE12) were won with a small margin of votes. Elsewhere, a study from University of Malaya Centre for Democracy and Elections (Umcedel) is quoted as placing the figure of fence sitters at 30 per cent of voters (www.the fadillah-work-hard-to-win-over-fence-sitters).

Support the struggle to build a Malaysia based on Justice, Freedom, Solidarity:
READ MORE:  Fighting for women’s rights need not be with a karate ‘chop’

Perhaps women voters (and to be fair, male voters too) who are still undecided about where or how they will cast their votes will consider a number of issues, including the following:

The extent of ongoing corruption is alarming. The Auditor General’s annual reports continue to show excesses and leakages due to mismanagement. It was estimated that between 2005 and 2009, the federal government’s cumulative overspending of operational expenses was about RM19.4bn. Sources elsewhere point to much bigger losses (www.malaysiakini.com/news/223827 ‘Bankrupt the nation? BN has done worse, says strategist’). Billions of ringgit have been lost due to corruption, shoddy procurement practices, incomplete projects, cost escalations and etc.

Perhaps one way to better understand the impact of such losses is to think about badly needed social services for people (men, women and children) e.g., housing, education, health care and transportation which could have been provided for had it not been for the wastage. There could have been subsidised transport to school for children in rural areas on Peninsula Malaysia and in Sabah and Sarawak. What about specialised support services for victims of sexual crimes or dedicated services and programmes for children with disabilities or legal representation for every child accused of a crime in the children’s court? There could have been well financed and instituted rehabilitation programmes for youth and adult offenders. The public could have had well resourced and trained service agency personnel (e.g., welfare, hospital, police) to deal with their needs effectively. Youths, especially those who are marginalised, could have had focused programmes and initiatives to support them. Think about well organised and subsidised quality child and elderly care in the community. Think of all these and other possible initiatives, programmes and implemented policies which could have really served and supported people in every state in this country had the money been used wisely.

Voters will have to consider whether handouts ranging up to RM500 a few times a year to a few million people or attempts under the Government Transformation Program and Economic Transformation Program to address the needs of the people make up for the billions of ringgit siphoned off by corrupt practices yearly. Also to be taken into account is the type of governance that does not bring (or rarely brings) people to account for the corruption.

Lack of protection of women and children

Women voters may also want to consider the level of violence against women and children. That it affects thousands of women and children yearly is bad enough but the impunity with which it takes place leaves countless women feeling unsafe not only on the streets but also in their own homes.

The system (from the Ministries involved to the agencies on the ground) meant to enforce the laws and offer protection to the victim is simply not working. Agencies tasked to investigate the crime, prosecute the offender or support the victims are simply unable to do an efficient or effective job. Even the basic issuing of interim protection orders (IPO) for victims of domestic violence is often problematic. Despite laws, policies and action plans for the protection of women and children, implementation on the ground continues to be weak. What or where is the duty of the government in this?

The Prime Minister (and also the Minister of Women, Family and Community Development) apparently tweeted that Malaysia is a defender of women’s rights. However reluctance to pass legal reform to end discrimination against women, conservatism over a woman’s sexual and reproductive rights, the continuous entrenching of the gender stereotypical roles of women and men, the difficulty women face in divorce and maintenance issues, the lack of affordable and accessible quality child care especially to those from lower-income groups or working outside the public sector, the non-recognition of domestic work as real work and the lack of protection and the difficulty in the right to redress for thousands of female migrant domestic workers, the refusal to make national statistics on violence against women and children publicly available, and the lukewarm efforts to attain 30 per cent female representation in decision-making positions are some indicators of how seriously (or not) women’s rights are being taken, promoted or defended.

Women voters will have to reflect on platitudes and promises made about protecting women’s rights (especially around election time) and balance it with the reality on the ground.

State violence might be another consideration for some women voters. According to the Ministry of Home Affairs, 209 people died in police custody between 2000 and September 2012 and 298 people were shot dead by the police between 2007 and August 2012. While it is mainly men who are killed it is very often the women who are left behind to mourn, to bury them and to pick up the pieces for the family. Of great concern is the lack of thorough investigation into such deaths which indicates a disregard of the violation of human rights.

The country is also witnessing state violence at peaceful assemblies and a growing level of violence at political ceramahs by groups apparently aligned with the ruling party. When such violence is not condemned, what is the message sent out? Women voters will have to consider whether this is the Malaysian model of moderation promoted at the international arena and whether this is the culture and behaviour they want Malaysian youth (including their children) to see, learn and later exhibit.

These are only some examples of issues to consider. There are of course many others including poverty, the environment, education, health care, and workers rights. All these issues intersect and impact on both women and men. And all parliamentary candidates and the parties they represent need to pay heed to these issues.

As the elections draw close, many politicians will experience a sudden clarity of vision and no doubt all sorts of promises will be made and handouts given. Women voters might find it helpful to assess a candidate’s (or their political party’s) track record on a range of issues or how the candidate has promoted the principles of good governance before deciding on how to cast their vote.

The chance for a change at the federal government emerges once again at the forthcoming GE13. Voters have a crucial role to play in deciding this, including women voters. Each woman voter has a choice to make. Her vote will voice her choice. Well, what will women’s voices say? Will it help create the change this country needs – a change in the culture of governance? We shall soon see. 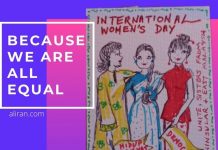