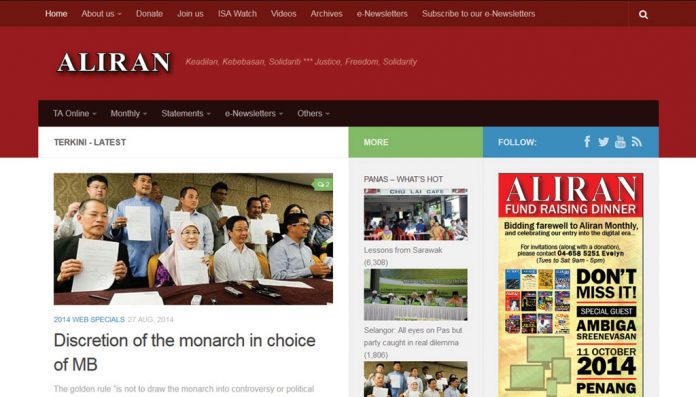 Anil Netto discusses the transition of Aliran Monthly from print to digital.

As the internet gained larger penetration in Malaysian households in the mid-1990s, Aliran started its own website in late 1997.

Then prime minister Mahathir Mohamad had pledged to keep the internet free from censorship. Many groups began to take to the internet to express themselves where previously they were denied space in the mainstream print and electronic media.

Our first articles posted online were reproductions from Aliran Monthly about a new anti-corruption bill (vol 17 no 7, 1997) and a smog emergency in Sarawak (vol 17 no 8, 1997).

Our first press statement posted online was Mustafa K Anuar’s concern about remarks made by the then Orang Asli Affairs Department director-general who had asserted that some local journalists and writers seemed to be echoing the writings of foreign academics about the Orang Asli which contained “nothing but lies”.

Our foray into the digitial arena, which came ahead of the advent of the popular Malaysian alternative news portals today, could not have been better timed. If the print Quarterly and Monthly was launched at the start of the Mahathir era, our online presence kicked off in the thick of the Asian economic crisis in 1997 and just ahead of the Reformasi era from late 1998 onwards.

During this period, our articles were read and shared by those hungry for credible analysis of what was taking place. A highlight was the AM interview with Wan Azizah, which we reproduced online in late 1998.

Initially, when we first started our website, it was hosted on the malaysia.net domain (i.e. www.malaysia.net/aliran). But after a couple of years, we soon outgrew that domain and moved to a new domain aliran.com and an external hosting company. We are now reliably served by a new hosting company with hardly any downtime.

For the past 15 years, we were faced with a conflict: how would our magazine and website co-exist? Would the website supplement and complement our magazine or vice versa? So we experimented. At first, we put only selected articles from the AM onto the website. Then we uploaded all the articles from AM on the website, but a month later. Later, we uploaded them much sooner to aliran.com so that they were more immediate and current.

Our online readership grew from about 150 visitors per day to close to a thousand visitors daily. But eventually, we came to the brutal realisation that sales of the AM were declining because most of the younger adults had turned to the internet for alternative perspectives. The AM was losing their attention and was not as effective as before in influencing the national discourse.

The production of the AM also ate substantially into our limited human resources and over the last decade especially it was financially a losing proposition. That too influenced our decision to plunge wholesale into the digitial media, where we hope we can reach out to the younger generation, from whom the leaders of the future will emerge.

Our website is now hosted on an open platform that is relatively easy to manage internally; thus we incur low website maintenance charges.

The website itself contains basic permanent information about Aliran: our brief history, what we do, our basic principles, how to join Aliran as a member, how to donate, etc

Apart from this, one or two articles are uploaded to aliran.com daily. These fall into the following main sections:

Thinking Allowed Online – These are short, more personal, pieces from our existing pool of writers. They may be first-person or eye-witness accounts, perhaps with an element of human interest and some simple analysis. With the digitisation project, we hope to expand this pool of writers even further and allow more of our members and supporters to express themselves.

Media Statements – We will continue to release media statements regularly on pressing or crucial issues. These will represent the position of the Exco. Previously, these statements were published under Current Concerns in the AM. But they now reach a wider audience as they are shared, reproduced and reported elsewhere.

Aliran Monthly articles (since 1997) – At first, selected articles were published but later we published all our original content in the AM on our website.

Now that the AM has ended, this does not mean that we will stop publishing longer analytical pieces on current issues. We will continue to do so, but this time online, under a new section to be created on our website.

Civil Society Voices – These are selected statements from other NGOs, usually those with whom we often collaborate on various human rights and reform initiatives.

Towering Malaysians – These are articles written for us to pay tribute to Malaysians, usually on the occasion of their demise, who have contributed to the struggle for justice, freedom and solidarity. By publishing such pieces, we hope to inspire younger Malaysians to pick up the baton that has been passed to us in the struggle.

Web Specials – This section contain excellent articles from elsewhere on the internet which we reproduce to reach a wider audience in the country.

At present, our website records an average of 1500 visits a day, and we hope to build on this to reach an even wider audience.

As part of our digitisation plan, we will scan and place our entire 33-year archive of Aliran Quarterly and Aliran Monthly on the internet i.e. all our magazine content since 1980. This will ensure that our precious archives of old Aliran Monthly magazines – a national historical treasure of documentation of a crucial period of post-independent Malaysia from an alternative perspective – will reach new generations of Malaysians.

We also hope to make our website more interactive and plan to train more people to manage our website and social media outreach. For this, we are looking for funding.