He is running to the Indian Malaysians to back him up strongly with promises of a better deal for them if the BN is returned to power, writes P Sivakumar.

With the 13th General Election around the corner , Prime Minister Najib Razak is running around the country frantically to garner support for the BN by throwing cash and other goodies to the people.

Realising that the Malays are no longer reliable when it comes to voting for the BN and the Chinese Malaysians votes are unpredictable , he is running to the Indian Malaysians to back him up strongly with promises of a better deal for them if the BN is returned to power in GE13.

Najib knows that many of the Indians , especially those in the lower-income bracket, are gullible and will easily fall prey to sweet talk; hence he is hankering after them for their votes.

All round discriminatory treatment

What better stooge than MIC can Najib get to orchestrate an action plan of entertainment and handouts to win over and frighten the poor Indians and garner their votes for BN.

Whether the Indians are going to give him their full support this time , as anticipated, is doubtful because for more than 50 years the Indians have consistently given their loyal support to the BN and all they may have got in return is all round discriminatory treatment.

Nevertheless , even if the PM is sincere in wanting to help the Indians , it would appear that the Malay-dominated civil servants in the Government are not inclined to toe his line as they have their own agenda. To lend credence to this statement , a classic example is the poor intake of non-Malays into the civil service and the thousands of stateless Indians and red IC holders.

As far as contracts, business permits, licences, scholarships, places in varsities and government institutions of higher learning are concerned, their grievances continue to be put under the carpet .

Furthermore , the Indians are also very unhappy with the way the NEP has been implemented right from the beginning . Although the NEP was designed to narrow the economic gap between the Malays and the non-Malays, its primary aim was the eradication of poverty at all levels regardless of race.

Under this concept , every poor family – whether Malay, Chinese or Indian – should have benefited without any discrimination but unfortunately the Government had all along concentrated on solving the problems of the Malays only and deliberately neglected to address the problems faced by the non-Malays, including the Indians.

As a result, many of the poor Indian families who deserved help have been left out and are forced to struggle to cope with the realities of life under extreme hardship.

Also in the name of the NEP, the government has totally transformed the nation’s bureaucracy in favour of the Malays, who have taken over most of the important and key positions leaving scant employment opportunities for the non-Malays.

Thus, it may not be an exaggeration to say that the public sector has now become the near monopoly of one race with BN having marginalised and alienated the non-Malays.

Under the guise of privatisation, every new establishment, institution and enterprise has also been made to favour the Malays, thus ostracising the non-Malays altogether.

This should not have been the case in a multi-racial country like Malaysia where every major race should be seen to be participating in the mainstream administration of the nation.

Definitely not, and yet he has the cheek to say that repeatedly. So the PM’s 1Malaysia slogan is nothing but a gimmick to hoodwink the people . The so-called power-sharing among the coalition partners like Umno, the MIC and the MCA is also a farce.

What the non-Malay partners have seen all through is the dominance of Umno Malays, much to the bane of MCA and MIC.

It is Umno that is calling the shots and dictating all terms for more than half a century.

The Umno-dominated BN government has been perpetrating an iniquitous regime of divide and rule in favour of one dominant race only, whereas all citizens regardless of race deserve equal treatment.

The non-Malay founding fathers of independence certainly did not negotiate for such terms nor envisage this kind of discriminatory treatment for their communities after independence.

If the government resorts to major changes to bring about enhanced benefits to the Malays in order to uplift their socio-economic status, it is perfectly all right as nobody will begrudge them for doing so. But it should not be done to the detriment of the non-Malays as they also have a right to fair treatment.

Hence to ensure justice and fair play to everyone regardless of race, it is imperative that communal parties such as Umno, the MCA and the MIC are dismantled altogether and multiracial parties like Pakatan Rakyat should replace them.

The argument by the BN that Pakatan Rakyat is not capable of governing the country is not only preposterous but utter nonsense.

Anwar Ibrahim was once the DPM in Mahathir’s cabinet and is certainly capable of running the country. Hadi Awang, Lim Kit Siang and Karpal Singh are all seasoned politicians who are fit to run the country when given the opportunity.

The BN is simply cooking up negative stories about the opposition to instil fear in the minds of the people so that they will not vote for the opposition.

The people have had enough with the unscrupulous tactics of the BN government, and it is high time another party like Pakatan is elected to ensure fair governance.

When President Roosevelt of America died, America did not collapse; similarly when Winston Churchill of Britain died, Britain also did not collapse but continued to survive. So if the BN collapses in the coming GE13, nothing will go wrong except that it will bring about the demise of the BN even as Pakatan celebrates.

So let us all vote for the change that Malaysia badly needs to move forward as one nation and one people.

P Sivakumar is the president of the Malaysian Indian Business Association 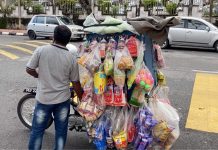