No priority is given to those who have chosen the most eco-friendly, non-polluting and healthy means of travel, laments Angeline Loh.

An elderly lady carrying her market basket full of groceries was looking left, right and left again before crossing a busy road. A group of school children were also standing at the side of the road looking right and left, hoping to find a suitable gap in the traffic to dash across the road to the bus stop on the other side.

A man with a crippled leg was also trying to cross the road. He could not move as quickly as the young and energetic schoolchildren and looked worried by the heavy, fast moving traffic. Would anyone be kind enough to slow down or stop to let him limp slowly and safely across the busy wide road, with its long, high, concrete divider? There were no gaps in the concrete barrier to allow a pedestrian through to cross to the shops on the opposite side of this six-lane road.

The man with the disability waited for the traffic flow to slow down to a standstill at the traffic lights. With a pounding heart and a prayer – that the traffic lights would stay red for at least two minutes, he made his way slowly and cautiously across, through the rows of waiting cars, lorries and motorbikes. Just as he reached the last row, the traffic lights turned green and the vehicles he had passed started up and sped away again into the distance.

Then, he heard loud car horns, saw flashing lights, and motorists waving arms from their car windows. He realised they were shouting at him to move off quickly. He threw himself as fast as possible against the concrete divider to get out of the way of these impatient motorists.

His ordeal was not yet over, he limped along the concrete barrier towards the traffic lights to wait again in the midst of the traffic flow, to cross the remaining half of the road. Another red light to wait for and another dangerous journey to the other side. There was no means or place to safely cross this six-lane-wide road. It will always be a life-threatening risk for him, the elderly lady, the schoolchildren and numerous other pedestrians to get across such roads.

The same risk is taken by bus-users who alight at stops on one-way roads where no pedestrian crossings exist. They have to risk their lives crossing a street, especially when the traffic flow is fast and continuous. It is the rare motorist who considers the pedestrians’ dilemma and stops to allow them to cross.

Motorists often pay little attention to road-users on foot. Driving through red pedestrian traffic lights is a common offence for which there seems to be no penalty. Some car drivers curse and swear when they have to stop at pedestrian crossings; some completely ignore them even when there are people using these zebra crossings.

There are many roads and places where pedestrian crossings don’t even exist. At wide multi-lane cross-roads, some walkways stop short of traffic lights and pedestrians have to brave it on foot squeezing themselves close to the side of the road as much as possible, in order not to be knocked down by passing vehicles. Some roads have no walkways at all. Regrettably, there are no pedestrian crossings on main roads fronting a number of local schools in Penang. Much reliance is placed on the school traffic wardens, who have a tough job seeing hundreds of school children across the road at dismissal time.

House-owners often park vehicles on grass verges along roads in residential areas. In numerous instances, house-owners make the public walkway or grass verge in front of their houses, part of their gardens. They even fence off and landscape these areas, which are public property, preventing anyone passing-by on foot from having a safe space to walk. Pedestrians are forced to walk on the road, because thoughtless house-owners treat public walkways as part of their private property.

Some grow bushes on public walkways, obstructing them. Growing a tree to provide shade is one thing, but growing ornamental bushes and low branched perennials on a public walkway outside your fence is a danger to the public. Why? First, it obstructs the public walkway where anyone can walk safely without having to go onto the road. Second, it also obstructs the view of drivers coming out of or turning into road junctions, thus becoming a potential cause of accidents in the area.

Illegally double-parked vehicles don’t help to make Malaysian roads safer. Such thoughtless behaviour poses a greater danger than many of the public realise. Not only does it create a danger zone obstructing the view of oncoming traffic; it leaves no space for traffic to avoid knocking down anyone walking along the road, and opens illegally parked vehicles to damage and being towed away or clamped (if law enforcement prevails).

When roadworks are in progress, the first road-users whose safety is usually compromised are pedestrians. Very often no provision of a safe walkway is made for those going on foot across the area where road-works are being carried out. Sometimes, it becomes very difficult to reach one’s destination because these dangerous obstacles totally block access to places.

Pedestrian safety, especially of those with disabilities and the elderly, is completely compromised by obstructions on walkways and pavements like billboards, telephone booths, rubbish bins, garden pots, motorbikes, cars and many other obstructions strewn on the walkway. Poor maintenance of walkways gives rise to gaping cracks, holes, or broken concrete slabs on which a pedestrian could trip and fall by getting toes or feet caught in these cracks and holes. Senior citizens, people with disabilities, small children and even the able-bodied are thus endangered.

Uneven walkways or pot-holed grass verges put those using these walkways at risk of injury, and could result in sprained ankles or broken limbs. Senior citizens as well as very small children could easily trip and fall on these uneven walkways. It is virtually impossible for people with disabilities to use them safely. Some walkways and road dividers are built too high for senior citizens, small children, the sick and disabled to climb onto to safely walk along the road.

Despite all that has been said and done, apparently in the public interest, pedestrians remain the most neglected and forgotten of road-users. There are few safe places for walkers. No priority is given to those who have chosen the most eco-friendly, non-polluting and healthy means of travel that originates from pre-historic times when homo sapiens learned to stand upright on two legs. When fuel runs out and engines break-down, what will we do but join the walkers, the millions on foot – the pedestrians of the world. 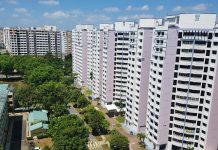 Where are all the cars? Comparing Singapore with Malaysia 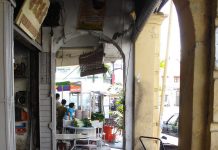 Widen the scope of penalty for blocking and damaging public spaces 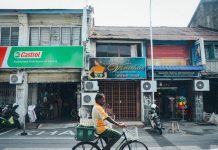