Benny Teh reviews a book by Johan Saravanamuttu that takes a look at the various phases in the first 50 years of Malaysian foreign policy.

I have been looking forward to Saravanamuttu’s book since I came to know about its making a few years ago. I was also eager to see what has changed since his first publication The Dilemma of Independence: Two Decades of Malaysia’s Foreign Policy, 1957-1977in 1983.

Scholarly books on Malaysian foreign policy are unfortunately limited and those that push the limit to go beyond the typical leadership factor and fuse internal and external dynamics to extricate the intricacies that more often than not do not present themselves a prioriare even harder to find. Having read this book until the end, I am convinced that the author has successfully elucidated important insights that set it apart from its contemporaries. Nonetheless, I do have several reservations to share.

Before I dwell further, it is best to start off the review with a note on the layout of the book. Written between 2007 and 2009, the book is divided into 13 interrelated chapters, including a postscript chapter on the changing of the guard from Abdullah Badawi to Najib Abdul Razak in 2009 (Chapter 12). The chapters are arranged around four important themes that the author deemed befitting, namely neutralism, regionalism, globalisation and Islam. They are designed to capture the spirit of history by reflecting on the chronological orientation of significant events as Malaysia’s foreign policy unfolded, grew and matured over a long span of 50 years.

In setting the boundaries, the author frames his study in Chapter 1 as not only to “convey accurate ‘macro historical’ narratives” but to “provide critical-constructivist appreciation, understanding, and analysis of [Malaysia’s] foreign policy” (p. 16). This is undeniably the main distinctiveness of the book, employing a mixture of social constructivism and critical theories at the onset to analyse the empirical landscape of foreign policy changes based on a predetermined time frame. Such a theoretical framework that very few have employed, less so to cover the entire spectrum of Malaysia’s foreign policy, allows the author to provide a fuller depiction of how foreign policies have been formulated and strategies pursued over time.

More often than not, Malaysia’s foreign policy has been introduced or presented purely as an outcome of the idiosyncrasies of the chieftains and is habitually done out of expediency since they are most widely reported and therefore most obvious to identify. It would not be too difficult then to equate Malaysian foreign policy to the persona of an individual, say Dr Mahathir Mohamad for example. While taking such an approach has merits worth considering, it does present serious limitations.

To avoid such pitfalls, the author has rightfully dedicated an entire chapter on the position of the Ministry of Foreign Affairs (MFA), better known as Wisma Putra. Chapter 2 speaks volumes of the changes that the MFA has gone through over the years and the roles that certain prominent diplomats have played in the carving of foreign policies. The author may have taken a cue from Charles Jeshurun’s (Malaysia: Fifty Years of Diplomacy 1957-2007, 2007) critique that The Dilemma of Independence did not give enough emphasis on the role of the MFA.

Chapters 3, 4, 5 and 6 are fundamentally based upon the author’s previous work, The Dilemma of Independence. Essential paragraphs and parts are retained but some are aptly reconfigured and new ones added to provide greater coherence and flow throughout the entire book. Chapter 3 discusses the birth of Malaysian foreign policy that was inevitably pro-Western in nature. Chapter 4 emphasises the troubled years particularly of Konfrontasiand the quest towards neutrality. A more stable foreign policy anchored on neutralism marks Chapter 5, which not only highlights the establishment of diplomatic relations with China but also of Asean’s role and of economic nationalism. In Chapter 6, the author provides a clearer picture of Malaysia’s unfolding relations with Asean and the eventual signing of the Treaty of Amity and Cooperation (TAC), Asean’s centerpiece on security cooperation that arguably has successfully stood the test of time. The extensive discussions offered in these chapters significantly capture the policy changes that were influenced by a myriad of global, regional and national challenges.

The next two chapters, i.e. Chapters 7 and 8, form the bulk of the Mahathirian era. Being the longest serving premier, the literature on Mahathirism is numerous but rather than taking the popular route, the author chose a less traversed one by painting the first half of the era as an iconoclasm that saw the breaking down of traditional barriers and the remoulding of the nation’s trajectories through a series of policy initiatives under “an authoritarian capitalist political regime” (p. 185). Derived in most part from the author’s well written article “Malaysia’s Foreign Policy in the Mahathir Period, 1981-1995: An Iconoclast Come to Rule” (Asian Journal of Political Science, 1996), the chapter revolves around the construction of foreign policy strategies and actions in confronting globalisation. It projects an unstoppable leader who was prepared to go the distance to achieve his vision and the price that came along with the policies.

Chapter 8 covers the second half of the era. Here, the author critically describes the domestic political and economic challenges that Mahathir had to face from the onset of the 1997 Asian financial crisis until he retired in 2003.

Mahathir’s successor, Abdullah Badawi, more affectionately known as Pak Lah, is expansively discussed in Chapter 9. Centring on the two themes of Islam and globalisation, Saravanamuttu argues convincingly that the notion of Islam Hadhari had been weakly constructed and that Pak Lah’s soft power enabled a number of thorny irritants that existed in Mahathir’s time to be resolved amicably. While I agree with him on the lacklustre of the Abdullah regime, I would add that Pak Lah’s non-offensive style of leadership created an unintended consequence that saw the opening up of new political spaces for civil society movements. I am also of the opinion that a dedicated section analysing the role of Wisma Putra in helping to construct the image of “civilisational Islam” abroad would have significantly enhanced the discussion.

Meanwhile, Chapters 10 and 11 discuss Malaysia’s politico-security relations with its immediate neighbours and Malaysia’s foreign economic policy as a developmental state respectively. Issue and event based, they move away from the chronological narratives pertinent to the previous chapters to demonstrate the “seamless manner” of foreign policy transition. However, centring the theoretical analysis in the main text as part of the discussion process instead of consigning it to the conclusion section might yield a better appreciation of the constitutive forces that the author aims to capture. Likewise, explaining the socialisation processes among relevant bureaucratic agencies such as the MFA and the Ministry of International Trade and Industry (Miti) could have enhanced the strategic understanding of Malaysia’s reluctance and subsequent pursuit of FTAs.

In essence, the author has presented a valuable framework in recognising the trajectories and trepidations surrounding the first fifty years of Malaysia’s foreign policy. The introduction of “middlepowermanship” in the concluding chapter adds credence to the overall explanation of a constructed foreign policy suitable for small/medium powers like Malaysia. The author is absolutely correct in pointing out that there are very little spaces for the involvement of civil society in the making of foreign policies. However, the lack of participation should not mean that civic groups and non-governmental organi-sations (NGOs) are not interested in international issues. On the contrary, they have been lobbying and clamouring for their voices to be heard on a wide range of concerns ranging from human rights and migration to economics and the environment. The Malaysian society was passionate and deeply moved by the plight of the Bosnian Muslims when ethnic cleansing became the order of the day in the Balkans. Equally, local NGOs and interest groups have lobbied hard to affect foreign economic policy outcomes on FTAs.

Thus, constructivism provides an excellent platform to embark on an examination of the intersubjective meanings of socialisation not only among state actors but also between state and non-state actors. By delving deeper into the realms of multilevel interactions and transcending the delineation of time and space, perhaps a richer and more holistic argument that illustrates the shared understandings of foreign policy construction could have been derived.

Structurally, the book is well presented and thematically coherent, and the chapters are eloquently written. Orientation of facts and figures are thoughtfully researched and finely executed. The book performs commendably as a reading of the history of Malaysian foreign policy and contributes appreciably to the literature on alternative theories. I am certain graduate students, researchers, academics and even the general public would find this work highly informational and worth the read.

Dr Benny Teh Cheng Guan is a Senior Lecturer at the School of Social Sciences, Universiti Sains Malaysia.

Reproduced with the kind permission of the author and the editor of the Kajian Malaysia publication, where it appeared in Vol 29, No 1 (2011), p.115-118 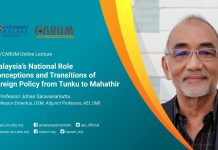 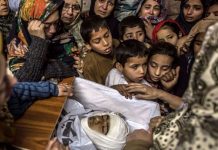