Madam Yap has been relieved of her lifelong suffering. May the PAP government one day realise the sufferings and hardship it has caused to thousands of families and ISA detainees, writes Teo Soh Lung.

How would a mother feel if her eldest son who is so bright and full of promise is imprisoned for no reason and without a trial? How would she feel when that imprisonment turned out to be so endless and so cruel, lasting 32 long years?

Madam Yap Swee, aged 94, who passed away on Monday, 26 December 2011 after prolonged illness, was that mother. In the last few weeks of her life, she enjoyed the comfort of being with her eldest son, Chia Thye Poh, who took care of her day and night.

When Chia Thye Poh was arrested at the young age of 25, he was a legislative assemblyman. Three months after his arrest, his mother was taken seriously ill. Thereafter, her health continued to decline as she suffered many strokes, which left her bedridden. Till today, no one can forget the hardship she and her family went through. The family suffered in silence for 32 years and more.

When Mrs Lee Kuan Yew suffered a stroke and was physically incapacitated, her husband and children were by her side and she was given the best medical care. It was not the case with Madam Yap. The then prime minister, Mr Lee Kuan Yew ,and his cabinet ministers did not even consider releasing her son on compassionate grounds or putting him on trial. He was literally left to rot in prison and his family left to fend for themselves.

Freed at the age of 57, Chia Thye Poh found it impossible to find meaningful work in Singapore even though he is effectively tri-lingual in English, Chinese and Malay and a Physics and Mathematics graduate of the now defunct Nanyang University.

He was compelled to leave his mother when he accepted a scholarship to do his postgraduate studies at the Institute of Social Studies in The Hague. He went on to obtain a doctorate there. His work abroad took him away from his beloved mother and family.

Madam Yap is now relieved of her lifelong suffering. May she rest in peace. And may the PAP government one day realise the sufferings and hardship it has caused to thousands of families and detainees with its ruthless use of the Internal Security Act. Finally, may we all be vigilant and be prepared to speak out against injustice.

Teo Soh Lung graduated from the University of Singapore with a Bachelor of Laws (LLB Hons) in 1973 . In 1981, she set up her own law firm and in 1985, she co-founded the Law Society Criminal Legal Aid Scheme which offers free legal assistance for criminal cases to the poor and needy.

In May 1987, she was arrested and detained without trial under the ISA together with the others for purported involvement in a conspiracy to overthrow the government by force. She was released after four months but was imprisoned again in 1988 for refuting the government’s allegations against her. She was finally released in June 1990.

Soh Lung published her memoir Beyond the Blue Gate: Recollections of a Political Prisoner (2010) and was one of the editors of ‘Our Thoughts Are Free: Poems and Prose on Imprisonment and Exile’ (2009). 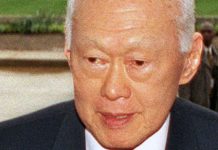 I am Sporean. My wife is Malaysian. We were originally from Kedah & Penang. We feel good to hear that the rigtheous and consistent Dr Chia Thye Poh took care of Mother Yap Swee. Every Parent will be confortable and enjoy the care of their children, double in both dirention!
Sporean including former minister S. Rajaratnam and many others passed away after many years care by nurse or maids.
My observation is that people who are spiritually, mentally & physically fit are successful in this life and there after. I pray for God’s Blessing for all of us. Amen.

Like many others of conscience I too harbour a deep seated hatred and aversion to the methods of the Singapore governments past and present in how it treats its opposition. But there ends my criticism of the government. The opposition groups that dominate Singapore and Malaysia consist of a loud and disruptive coeterie of mainly lawyers, devoid of the skills they claim by virtue of their degrees in law. Their skills in practice leave a lot to be desired. Education is meant to inculcate in the minds of those who seek knowledge, reasoning and the power of reasoning. Yet if one closely studies the works methods and writings of the opposition one wonders if they have the capacity to run their own families let alone a nation of diverse families and cultural groups. Yes the plight of this woman is indeed heart wrenching. But how much of it was the result of her son’s misguided ambitious plans to (allegedly) overthrow a government he could not. People tend to conveniently suffer a form of amnesia where the truth is concerned when it comes to what went on… Read more »

I have a Singaporean friends who was arrested under ISA. He told me how most of his friends and relatives suffered. You just dont believe how a human being because of power will treat his own kind. He gave up smoking and drinking,keeping a healthy live style. He told me,he did that because he wants to out live LKY,so that he can see (LKY’s fate).