The outcome of the case between a Japanese MNC and activist-lawyer Charles Hector indicates widening protectionism of the corporate agenda, reports Angeline Loh.

The Court of Appeal’s 23 August 2011 decision to reject the appeal to stay proceedings in the case of Asahi Kosei (M) Sdn. Bhd v Charles Hector Fernandez, which metaphorically ‘bludgeoned’ Charles Hector with costs of RM10000, was an unnecessarily harsh punitive measure for an interlocutory process.

This appeal came in the wake of a pending appeal on an application to join 31 Burmese migrant workers as co-defendants with Hector, to be decided on 5 October by the same court.

Hector, a human and labour rights defender, lawyer and blogger was being sued for RM10m by Japanese multinational company, Asahi Kosei’s Malaysia branch. allegedly for defaming them in his blog in February this year. The company accused Hector of spreading malicious and false allegations of human and labour rights abuse of the Burmese migrant workers working in their factory.

The company brought the defamation suit against Charles Hector despite efforts made by him to verify and confirm the complaints of labour and human rights violations that were disclosed by the 31 Burmese workers from the firm’s plant in Selangor. The Burmese migrant workers had also lodged a complaint with the Labour Department and Suhakam (the Human Rights Commission of Malaysia), prior to the company’s instituting legal action against Hector.

There was thus a lawful avenue for dispute resolution with Labour Department assistance, initiated by the complaint filed by the migrant workers, in which the company could have engaged and amicably settled the problems. The defamation suit against Charles Hector, according to many thinking Malaysians, was thus totally unnecessary.

In addition, the company, in all fairness, had been given a fair chance to verify the facts of the migrant workers’ complaints. The firm had received adequate indication that the information of human and workers’ rights violations would be taken as genuine and would be published on Hector’s blogs, if no response was forthcoming. Asahi Kosei, unfortunately, failed to use these opportunities to find a simple solution to the problem before resorting to legal action.

If, as the the company claimed, the workers involved were not their workers but employed by an outsourcing agent, then they should have responded accordingly to Hector’s enquiries instead of raising this matter in a legal suit. Asahi Kosei, as it were, did not act reasonably in pursuing this defamation action despite the choice of avenues open to them to resolve the matter in a dignified and sensible way.

After an odyssey of intelocutory applications, which were all refused by the High Court, the rejection of this appeal appears to be an obstruction of justice in this case. The rejected applications included one to set aside an exparte gag order stopping Hector from discussing the Burmese workers’ allegations of rights abuses on his blog and on Twitter

The Court must have been fully aware that:

It is dismaying that the Court of Appeal exhibited an apparently partial disposition in giving counsel for Charles Hector (the Appellant) less time to state his case but more time to the counsel of Asahi Kosei (the Respondent) to do so. Moreover, the court failed to make any effort to consider a just amount of costs between the RM2000 proposed by Hector’s counsel, and the RM10000 suggested by Asahi Kosei’s counsel.

The Appeals Court, however, awarded costs of RM10000 in the company’s favour (apparently on the basis that it was raining heavily on the hearing day?).

It was obvious that the Respondent company was merely ‘fishing’ for an excuse to claim they had been put under hardship to attend this appeal hearing, which they implied was a vexatious action.

The reverse was actually the situation, as several of those who attended the hearing did not have private transport but had to use public transport to go to Putrajaya. Some of them incurred large expense in the effort to attend the case they saw as significant and holding possible repercussions for the working conditions of migrant workers and rights advocacy.

Many of these attendees, including representatives of the European Union, Norwegian Embassy, international and national human and labour rights advocates, women’s rights advocates, Suhakam and the Burmese community were visibly shaken by the Court of Appeal’s decision. They were taken aback by the disposal of the case within a little over five minutes without hearing full arguments from both sides and by the arbitrary award of costs to the multinational corporation (Asahi Kosei).

The Appeal Court’s decision may be viewed as oppressive and seemingly meant to ‘punish’ Charles Hector for exercising his right to appeal and be treated fairly by a court of law. The Court’s behaviour is questionable and fails to adhere to its obligation to do justice or to see that justice is done. Such actions also serve to erode public confidence in the judiciary and the system of justice in this country.

The Appeals Court’s apparently flawed decision was not the end of the matter, as the trial continued as scheduled on 24 August. However, it could not begin to deal with issues of defamation as Hector’s defence counsel again raised questions of procedure – this time concerning the fairness of the prior interlocutory proceedings. Amongst other things, defence counsel applied for the judge to recuse herself from this case.

The main reason for this was, in short, the court’s overall allegedly partial attitude in favour of corporate interests over that of doing justice between the litigants. The court appeared to have pre-judged the case even before thoroughly examining any evidence to prove the allegations made by the multinational corporation. Thus, justice was perceived to have already been compromised before any proper trial of the defamation suit. Counsel for Asahi Kosei was given a fair chance to rebut the arguments supporting the application for recusal, in keeping with legal procedure.

Nonetheless, on Thursday morning, 25 August 2011, negotiations for a settlement of Charles Hector’s case took place. It wasn’t clear which side initiated the settlement. However, what was ultimately agreed on by both parties after nearly half a day of negotiations was not exactly a just outcome nor can it be seen as even being close to justice.

It was still heavily in favour of the multinational company at the expense of Charles Hector, an individual lawyer and human rights defender, who does pro bono cases for migrant workers qualifying for legal aid.

Terms and conditions of the settlement were very simplistic. These were :

The two half-page advertisements together will cost about RM22000. What is interesting about the chosen news dailies is that both of them are owned by the Malaysian Chinese Association (MCA) or persons linked to this Barisan Nasional component political party.

Furthermore, these mainstream news daillies are the wrong media in which this ‘apology’ should be published. Since the allegedly ‘contentious’ articles were posted on Charles Hector’s blog, the ‘apology’ should have likewise been published on the same blog. Only persons who had visited Charles Hector’s blog would have read the relevant articles and possibly those visiting other online media that may have chosen to publish the articles for their readers who were interested in migrant worker and human rights issues.

READ MORE:  Neglect by past and present governments to conform to ILO requests for information

Asahi Kosei, nonetheless, was insistent that the ‘apology’ be published in the print dailies to be read by the general public, many of whom are completely ignorant of the facts of Charles Hector’s case and the issues involved in it. This seems a deliberate attempt to embarrass Charles Hector, to ‘save’ the company’s face from the problems they caused themselves, making Charles Hector a scapegoat for their deeds.

Besides, Charles Hector is being used as an example and his apparent ‘humiliation’ is a warning to other human and labour rights advocates and defenders whose work involves raising awareness of human and worker rights violations publicly. As a foreign multinational corporation, Asahi Kosei might be seen as representative of other foreign global multinational corporations investing in Malaysia.

To many who have observed and been closely involved in Charles Hector’s case, the final result comes as no surprise. This case is not the first nor will it be the last to be so ‘indecently’ and unjustly treated by the so-called arbiters of justice. All through the legal proceedings, it was clear that profit-making coporate interests took priority over respect for human rights and dignity and the rights of migrant workers.

This is not the first instance in which courts are seen to have relinquished their role as impartial arbiters of justice but choose to assume the role of government servants promoting and protecting vested interests in line with the policies of the ruling party. It is common knowledge amongst the Rakyat (citizens) that the separation of powers among the Executive, Legislature and Judiciary no longer exists in Malaysia. Thus, the judiciary has given up its independence to maintain the shell of a structured legal system.

Moreover, our constitutional rights of freedom of speech under Article 10, which applies to every citizen of Malaysia, has been denied to arbitrarily gag, not only, human and labour rights defenders and advocates, but any would-be whistleblower, courageous enough to make a stand for justice and the protection of human rights.

This significant case has many repercussions that could become the topic of discourse amongst governments, legal professionals, academics, inter-governmental organisations, non-governmental organizations and activists, nationally and internationally. The human and workers’ rights struggle is far from over. Many questions regarding the conflict of interests involving human rights, labour rights and business ethics globally remain unanswered.

Perhaps, the saving grace in this case is that it has highlighted the injustice within the judicial system that has manifested itself in various ways and exposed the politicisation of the justice system and the judiciary in Malaysia. It also indicates a widening protectionism of the corporate agenda using the judicial mechanism to give effect to government economic and financial policy. 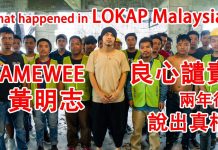