Pages From the Past looks back at the 1990 general election and finds that the problems of phantom voters and unreliable electoral rolls are major concerns that have been around for years.

A condition for elections to be fair is that the electoral rolls containing the list of people eligible to vote must be clean. Numerous complaints concerning the electoral rolls used for the General Elections held on 20-21 October, however, put to question how clean the rolls were.

Some complain that though they had registered during the voter registration exercise in March, their names could not be found on the official lists of electors used during polling. These omissions deprived countless eligible voters of their right to choose representatives for Parliament and State Assemblies.

Slightly more mystifying was the problem of ‘phantom voters’. For instance, an Indian lady from Ampang, Selangor received four voting cards (informing voters where they should go to vote) that were sent to her house bearing messages to vote Barisan; the curious thing was that the cards were addressed to Malay names though no one with such names had lived in the house for the 21 years she had been there. There are many other reports of people registered as electors with a certain address though these persons do not actually live there.

These ‘phantom’ include a list of 17 names registered as living at the address of a factory in Penang.

The existence of phantom voters on the rolls was one of the grounds for which Haji Sulaiman bin Kamaruddin sought an order from the High Court to instruct the Election Commission to rectify the rolls for the parliamentary constituency of Sepang and the Selangor State Assembly seats of Dengkil, Sg. Pelek and Batu Laut. The judge threw out the application, ruling that the matter had to be first brought to the attention of the Election Commission and Haji Sulaiman had not done so. However, in his judgment Mr. Justice Datuk Wira Wan Yahya Pawan Teh said “the facts in the case (are) startling”.

READ MORE:  Voter registration: What you should know

One of the things that must have startled the judge was that there were 30 names listed as electors living at 1 Bandar Baru Bangi though this is a fictitious address. (See Table 1 for a list of these names). There were another 38 names listed under the “2 Bandar Baru Bangi”, which is another address that cannot be found. Neither does “3 Bandar Baru Bangi” exist, though it has 32 names of electors who are supposed to be living there. The list goes on from 4 to 14, Bandar Baru Bangi, each address listed as having from 26 to 39 voters. None of these addresses exist. Their appearance on the electoral roll results in a total of 405 phantom voters for this area.

The Election Watch Secretariat also obtained a list for the Sungei Siput parliamentary constituency where there are 289 cases of the same IC number appearing more than once on the rolls. Table 2 is an extract from this list. It will be observed, for instance, that the bottom three entries are different names with the same IC number for the same polling station, Legap.

The tables presented here are extracts of lists prepared after computers were fed with the particulars of all those registered as electors in the respective constituencies and then programmed to print out the relevant irregularities. On the official rolls, the names are not in the same order as in these tables and hence it is impossible at a glance to spot these problems on the rolls used for polling.

These facts are not just startling, they are disturbing. Why are there so many phantom voters and so many cases of multiple entries of IC numbers? The lists make one wonder how many other constituencies have electoral rolls which are similarly defective. Just before elections are called, the Prime Minister himself announced that Umno was trying to trace phantom voters in Kelantan; later it was disclosed that an estimated 27,100 such voters were on the Kelantan rolls.

The Election Commission allowed the country to go to the polls knowing that the electoral rolls were defective. Why did it prepare the new rolls in such haste that they contained all these problems? Arguably, the Commission should have been more thorough in checking the rolls and only issued the new set when it was sure that these rolls contained no major defects. Was the hasty preparation of the rolls the result of being pressured into getting the rolls ready quickly for a snap general elections? The Commission chose to go ahead with the elections even for seats for which it had evidence that the list of electors was defective. Was it more interested in quick elections rather than clean rolls and fair polling? These troubling questions leave one wondering whether the independence of the Commission is as nominal as that of the Judiciary.

At the end of the day, electors are left asking whether the representatives chosen would have been the same had the electoral rolls not been defective. Did each voter have an equal opportunity for choosing his representative, or did the preferences of some count for more than one? Were the elections fair?

An independent Election Commission should not have acted in a manner that allowed these questions to arise. For the public to be assured that all electors had an equal say in voting, we need an Election Commission that is answerable to the King and the people, and does not appear to be under any undue pressure from any branch of the government. 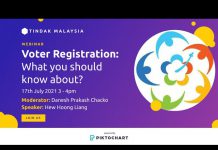 the msian EC CANNOT be trusted at all. Full stop! Period!