M Sukumaran has been apprehended many times by the police but he is so driven that nothing deters him from campaigning to ensure the human rights of every single marginalised person is protected, writes S Munusamy.

M Sukumaran, fondly known as Sugu, is the son of Munisamy Maniam and Sinnamah Sinniah, former estate workers. He was born on 28 April 1961, the second among seven children.

Sugu’s parents could only afford to educate him until Form Three. Despite only having a lower secondary education, Sugu went on to become a technician and continued to assist his parents to tap rubber.

He has been actively involved in social work in his rubber estate since he was 15. He was then very much taken up by the work done by Dr Jeyakumar Devaraj and M Sarasvathy, both of whom were also detained under the Emergency Ordinance.

Sugu was among the pioneers who began the ‘Kalvi Kuzhu’ (Education Programme for the Poor) in 1986 when he was just 25 years old. He brought in many of his friends and family members to become involved in the programme, including Nathan, Thilaga, Maniam and me.

By then, he had actively organised tuition classes for primary schoolchildren in five estates around Sungai Siput.

At the age of 30 in 1991, Sugu got married and has been blessed with three children – two girls and a boy. The year he got married was also a defining time for him, for he became a member of Alaigal, a grassroots organisation serving the poor and marginalised in Perak.

Sugu’s main goal was to champion the rights of estate workers, which had been trampled upon for far too long. He engaged relentlessly in pushing for, among others, housing rights, monthly income for estate workers, land rights and farming rights for the farmers in Sungai Siput and surrounding locations.

Sugu was many times apprehended by the police but he is so driven by his causes that nothing deters him from campaigning to ensure human rights for every single person who has been marginalised.

In 1998, at the age of 37, Sugu took another step forward by becoming a member of Parti Sosialis Malaysia (PSM) in the Sungai Siput branch. When he turned 47 in 2008, Sugu was appointed chairperson of the branch. On 4 June, PSM held its annual congress in Sungai Siput and Sugu was elected as a central committee member.

Sugu is also popular among members of PSM because of his ability to sing very well. He is able to perform the songs of struggles with his clear voice, some of which became instant hits among his listeners.

And since 1986, Sugu has untiringly hosted the ‘Titisan Peluh’ (Drops of Perspiration) programme in conjunction with the annual Workers’ Day celebration on 1 May.

No matter how involved he is in his work for society, Sugu has never neglected his role as a father. He gives his full attention to the education of his children, their financial needs and welfare.

For almost a month, Sugu was detained under the draconian Emergency Ordinance. The reasons for his detention were unbelievably ridiculous. Though his family anxiously awaited his return, it was truly remarkable the see the collective strength they summoned in confronting the crisis.

S Munusamy, a PSM Member, is a retired estate worker in Sungai Siput. 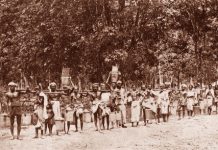