In our cover story, 2Khoo looks at the big debate about migration and the brain drain. We suffer the worst of both worlds: at the low end, we have plenty of low-skilled workers despite official policy to reduce the number; and at the high end, we are unable to retain our own highly qualified people nor attract those from foreign sources.

Another migration hot potato involves the Australia-Malaysia refugees-for-asylum seekers swap deal. These vulnerable people are being treated like commodities that can be bartered, writes Angeline Loh.

Next comes a series of articles on the clamour for democracy in the Arab world, which has inspired many around the world. Even Singaporeans seem to have caught the democracy ‘fever’. K Kesavapany believes that the Singapore general election result suggests that GDP growth alone is not enough; many Singaporeans want a more inclusive set of indices to monitor wealth distribution. Over in Pahang, a lack of democratic decision-making process was evident in determining the site of a controversial rare earth refinery in Gebeng. Our centrefold features key statements about the public opposition to this Australian plant.

We also need to reclaim our history! Andrew Aeria writes about a new Campaign for a Truly Malaysian History. History taught in schools should be a people’s history which is people centred, not elite focused.

Finally, P Ramakrishnan and Mustafa K Anuar take aim at the ‘lunatic fringe” in Malaysia who are threatening to undermine ethnic relations and incite hatred with their extremist views and racial chauvinism.

Leave behind prejudice and fear to change narrative on migration 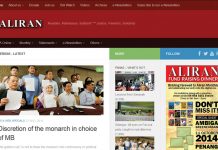 is this the only nation that drive the best brains away. how wonderful- no wonder malaysia is in a state of crisis. ;poor leadership n self interests n a corrupt culture is now destroying malaysia

At the rate the Malaysian government is approving unskilled muslim immigrants into Malaysian, just so the muslims will remain the dominion population will eventually leave Malaysia with a population of uneducated and unskilled. Especially so when on the other end of the scale the educated professionals and the rich are immigrating abroad.
No doubt people like shenanigan Mahathir’s ultimate aim to have the country dominated by the muslims will be achieved.
But his policy will leave the country with (many) illiterates and the quarter cooked will run the country.
No amount of incentives and added incentives will ever draw back the professionals, if ever it does, that the country needs to run the country efficiently.
Looks like Malaysia is doomed to become a fourth world African nation and with millions and millions of unskilled illiterates.
May be shenanigan Mahathir can very quickly come up with a policy that will send his expedited approved immigrants back to the countries they came from ?