The birth pangs of a new Middle East are being felt, but not in the way many outsiders envisioned, writes Mohammed Khan

No sooner did former US president George W. Bush come into power in January 2001 than a much vaunted neo-conservative doctrine came into full swing, wreaking havoc across the Middle East. Throughout the eight years of the Bush presidency, the levers of power – the political, the economic, the scholarly and, importantly, the military – were all employed towards one ultimate goal: The project for the new American century.

Bush’s neo-con backers had prepared the manual for his presidency well before time. With their man in power, the greatest force of Western power since the Roman Empire set about changing the world in the name of neo-conservatism, to “promote American global leadership”, we were told.

At the receiving end of the mighty American military-industrial complex were the people of the Arab world. The basic premise was to utilise maximum US force, power and influence to create a new Middle East, one obedient to the interests and objectives of the US. The central focus was the preservation of the superiority of Israel and the utilisation of American hard-power to eliminate any threats posed to it. The benign undercurrent, we were told, was the need to spread democracy across the region. After all, democracies do not fight wars against one other.

The scorecard of the Bush doctrine is there for all to see: “Shock and awe” was unleashed against Iraq in the pursuit of this project; the Palestinians in Gaza were collectively imprisoned for having the audacity to vote for Hamas; Lebanon was brutalised by Israel with the tacit backing of the US in an effort to destroy Hezbollah; Iran became the new public enemy number one (after Iraq had been dealt with of course); the Gulf states went along quietly arming themselves in the name of stability and North African dictators were given free rein to fight “Islamism” – also in the name of stability.

With American hyper-power on full display over this period, there was little doubting the contention that in the realm of international relations, “the end of history” was indeed being reached in the absence of any challenger to the formidable US military might. “Liberty” to Arabs, it seemed, was being brought on the back of American battle tanks. The destruction wrought on the region over this period was apparently “the birth pangs” of a new Middle East.

How times change. The human and capital cost, however, of the Iraq adventure almost bled the US economy dry. The invasion became so bogged down that the political will to continue the war soon weakened. The thought of expanding the military adventure to other lands similarly evaporated. Post-Bush, the Americans were now left grappling with “soft-power”, to persuade, to diplomatically engage with Arab/Iranian leaderships in order to resolve disputes. In the midst of this power play in the region, one constituency which the US had long ignored (and continues to ignore) is the people.

Toppling disobedient leaders and oiling the wheels of pliant ones proved useful so long as the populations of these countries remained voiceless. As the people begin to find their voices, however, the Middle East as we have long known it is beginning to alter. Unfortunately for the decision-makers in the US (and their policy advisers and legions of “intellectual” think tanks), the dramatic changes are not in the direction that they had conceived.

The catalyst for the political earthquake that we are currently witnessing was a massive popular uprising in Tunisia at the end of 2010. Emboldened by the overthrow of the brutal regime of Zine El Abidine Ben Ali, the people of Egypt then took to the streets demanding reform. In just 18 days, Egyptian civil society, which we had been told by regional “experts” either did not exist or was spineless, broke the shackles of oppression and overcame a dictator whose regime had become synonymous with abuse and corruption. Egypt had finally been released from 30 years of political imprisonment.

That Hosni Mubarak continued to breed fear about the “chaos” that his removal would unleash and his foreign backers continued to maintain the need for “stability” and “orderly” change, showed the total lack of understanding on their part of the momentous changes that were being played out. The revolutionary bug has now spread across the wider region with people in Algeria, Yemen, Bahrain and Libya currently battling despotism, while leaderships in Jordan, Syria and Morocco (to name but a few) consider ways of preventing the tide of “people power” from sweeping their shores.

Consider for a moment the extent to which various US administrations have suffered from an ailment which, for wont of a better description, we will call “foot in mouth syndrome”. The shah of Iran was an “island of stability” in the troubled Middle East, according to the then US president, Jimmy Carter. A short time after these illustrious words were spoken, Shah Mohammed Reza Pahlavi was dethroned; Iran had witnessed an Islamic revolution and US policy in the country was found lacking. Around the time that Iran’s new Islamic leadership swept to power, Egypt too was undergoing change, this time in the form of the presidency of Hosni Mubarak who came to power in 1981 following his predecessor’s assassination.

However, after almost 30 years of stern one-man rule, Egyptian civil society revolted against Mubarak’s despotism, seeking his ouster in January 2011, precisely a decade after Bush’s first inauguration. What were the very first utterances of the US administration under Barack Obama, as protesters gathered on Egypt’s streets? “Our assessment is that the Egyptian government is stable …” said Hillary Clinton, the US secretary of state. Her assessment, reminiscent of the meanderings about Iran, could not have been more wrong.

The islands of stability that the US has traditionally favoured are not the same sort that the people of the Arab world have desired. While Iraq under Saddam Hussein was ripe for invasion and “democratic change”, the hunger for reform on the part of populations in other parts of the region also subjected to Saddam-like repression was not felt by the US. Where the American military brought democracy to Iraq, the Arab people are now battling to bring democracy to themselves. Should we then be surprised that the neo-con intellectual machine that planned change in the Middle East under Bush is now largely silent? While their project has failed, a new Arab people’s project is beginning to blossom.

If any clear evidence of US opposition to the people’s wishes in the region were needed, the Obama administration willingly obliged on 18 February. The UN Security Council held a vote to condemn Israeli settlement building in the occupied West Bank as illegal and to demand an immediate end to all such activity. Settlement building is a particular sore among Palestinians and the wider Arab population. While 14 out of the 15 Security Council members backed the resolution, the US issued its first veto under Obama, damning the Palestinian Territories to further Israeli expansionism – well in keeping with the American spirit of defying global opinion. The PR spin on the veto will no doubt attempt to portray the US measure as some sort of noble endeavour. The nobleness was certainly in Israel’s favour.

When I was an undergraduate, the most fascinating, most closely scrutinised event that all students of the Middle East were exposed to was the 1979 Islamic revolution in Iran. That was a truly momentous event. The repercussions for the Middle East were staggering. Political Islam came to the fore as an academic discipline. The political power play in the region shifted with alliances quickly emerging against Iran for fear that its brand of revolutionary zeal would spread. That revolution continues to captivate.

More than 30 years later, however, the new crop of undergraduates will be evaluating perhaps an even more momentous event: that of 11 February 2011, when Egypt, the Arab world’s most populous nation, one at the core of the region’s political, economic and security affairs, defeated its very own despotism, rid itself of fear and raised expectations of a new era of political relations in the Middle East. Incidentally, Mubarak was forced out precisely 32 years from the day when the shah of Iran was deposed.

While the people of Tunisia wrote the introduction to what we can call the unfolding “project for the new Arab century”, the people of Egypt have just completed its defining first chapter. What conclusions can be drawn from these historic events is far too early to gauge. What is certain, however, is that many more chapters will be written before the political dust settles. Safe to say, nevertheless, that the birth pangs of a new Middle East are now definitely being felt, but not in ways that many outsiders imagined.

Mohammed Khan is a political analyst based in the UAE.
Source: Aljazeera

The Mask by Maya Angelou 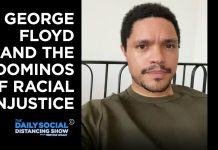 George Floyd and the dominos of racial injustice

In Islam, the people have the right to ask its leader to step down if they are no longer able to serve the people. They should do so peacefully and if they fail to do so, they can be forcibly removed. All these bloodshed is avoidable with an elected leader who can be disposed of in the polls. However, the undemocratic nature of all Islamic regimes inevitable means a regime ending in violence….