First Selangor and now Penang. Both these states are blazing the trail by being the first two to table Freedom of Information Bills in their State Assemblies. Anil Netto sets the tone for Sarajun Hoda’s cover story by reiterating that freedom of information is a basic right, without which other rights may be rendered almost meaningless. FOI means just that: information must be freely available, says Sarajun, who examines the Selangor FOI Bill – only to find that it leaves much to be desired.

Hishamuddin Yahaya then takes the BN to task for failing to explain the Constitution and the so-called Social Contract to the people. Jeyakumar Devaraj then examines how the NEP has morphed into the NEM and critiques the economic orientation of the various political parties.

After all those critiques it’s time for the lighter side as Soon Chuan Yean takes another look at Zunar. Up close and personal, the cartoonist extraordinaire is just a human being – funny, fond of food, humble and friendly. So why are certain parties so fearful of him? Another human interest story comes in the form of Andrew Lin’s account of the life and times of S P Seenivasagam, the other half of the legendary Seenivasagam brothers. Isn’t it a pity though that S P should go down in history as such a greatly misunderstood politician after having given his all for Ipoh?

Finally, the Indian subcontinent comes under the spotlight as Bonojit Hussain explores why the Taliban have been able to engulf Afghanistan once again. This is juxtaposed against a piece honouring peace activists from India and Pakistan who have worked hard to bridge the divide between the two nations. 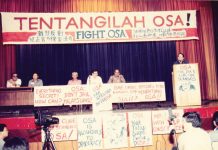 Abolish the OSA; enact freedom of information act in its place

Information freedom, the fourth and fifth estates: Hail the media and whistleblowers