Justice in Malaysia – or the lack of it – is our focus in this issue.

Teoh Beng Hock – and others who have perished – are not forgotten. P Ramakrishnan calls for a royal commission of inquiry to replace the discredited inquest. He was speaking at a civil society forum in Penang to mark the young aide’s sudden death. S H Tan reports on the forum. Charles Hector looks at the big picture of custodial deaths and calls on the government to end this plague.

Key Performance Indicators (KPIs) have been introduced in court to improve efficiency. But the preoccupation with the speedy disposal of cases may come at the expense of justice, warns the Penang Bar Committee.

On a different note, many of us shop in hypermarkets for the best bargains but Max F tells us that cheap shopping comes at a price: the more consolidated the retail market becomes, the easier it will be for large corporations to exploit farmers and other small suppliers.

Workers too are being squeezed. Proposed labour law amendments do little to remedy long-standing injustices for employees, points out Syed Shahir Syed Mohamud.

Finally, Angeline Loh urges the authorities to be more transparent about outbreaks of diseases: efforts to raise public awareness of leptospirosis prevention measures appear to be more low key in contrast to past and ongoing health campaigns for dengue, SARS and AH1N1. 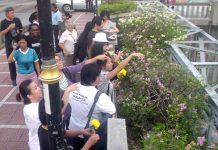 MALAYSIAN JUSTICE IS ON TRIAL THE WORLD IS FACING PROBLEMS.WE IN MALAYSIA A BIG ONE OUR JUSTICE SYSTEM IS ON TRIAL. OUR MALAYSIAN WAY OF LIFE IS BEING THREATENED. THE LAST 5 DECADES AND THREE YEARS HAS SEEN A SLOW DETERIORATION OF OUR JUSTICE SYSTEM AND POWERS THAT RULE ARE TO BE BLAMED. THEY CONTROL AND ADJUST THE SYSTEM TO ENSURE THAT THEY ARE IN FULL CONTROL. OUR JUSTICE SYSTEM IS NOT INDEPENDENT OF THE POWERS THAT RULE. WE CANNOT AVOID THIS BECAUSE “WE LET THEM” OUR VALUES IN RACIAL HARMONY IS NOW BEING QUESTIONED. THE RULE OF LAW IS FADING>OUR JUSTICE IS NEAR COLLAPSE. THE VERY PEOPLE WHO MUST PROTECT US NOW ARE RESPONSIBLE FOR UNEXPLAINED DEATHS . TO BE IN OPPOSITION IS DANGEROUS AS WE CAN CLEARLY SEE OPPOSITION LEADERS BEING ‘SODOMIZED’ BY THE VERY SYSTEM THAT MUST PROTECT AND SERVE THE PEOPLE. IF WE DO NOTHING WE THE PEOPLE WILL BE AT THE LOSING END. WE CANNOT CHANGE “PUTRA JAYA BUT WE CAN CHANGE THE PEOPLE THAT WE SEND . SEND THOSE WHO WILL TRUTHFULLY SAY THAT THEY WILL PROTECT THE PEOPLE FROM… Read more »