Teik Chee was a man of small physical stature; but his talents and sensibilities were monumental in quiet unassuming ways, recalls Tong Veng Wye.

I first met Teik Chee in 1980.  He was a thriving lawyer with his law office at Che Em Lane in Penang in an area where law offices seemed to congregate.  I was an undergraduate studying engineering but drawn to non-engineering books in bookshops, one of which was Aliran’s ‘Whither Democracy’.

Teik Chee’s name was in the book and I made contact with him.  It was a cold call but Teik Chee was, not surprisingly, gracious enough to set up an appointment and we met at a coffee shop close to his office.  I think the intention was lunch.  But it went from lunch to extended lunch to tea.  That day I had the pleasure of being an audience of one to a Teik Chee “ceramah” in a coffee shop as he held court.

A Teik Chee “ceramah” was always a worthwhile experience.  It was no self-indulgent peroration but was always wittily intelligent, rich with information and insight; bearing much opinion but never sanctimoniously opinionated. His conversations were stimulating because behind the communication, eloquent and learned as they always were already, was a man with a habit for thoughtfulness and reflection.

The depth of mind that he possessed gave him also the tools to be a person engaged for many long years with not only the law but also social activism, the performing arts, poetry, spiritual and ethical refinement.  Teik Chee was a man of small physical stature; but his talents and sensibilities were monumental in quiet unassuming ways.

He had his little quirks.  He had a propensity to be late – very late – for Aliran meetings.  But that was, inexplicably, part of his endearment to Aliran colleagues.  He always seemed to me to be meticulously clean.  And, though this is really not a quirk but a manifestation of his spiritual values, he had a policy of never buying a car costing more than RM100k even though he could easily afford that.  But when it counted, he would be generous.

How Teik Chee came to pass from this world the way he did is a matter none of us is in a position to judge.  None of us ever really knows another’s world well enough.  But we do know a good man when we become friends with one, and we have lost a good and precious friend. 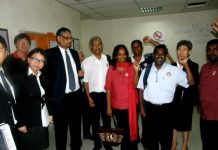 Raja Aziz Addruse – At the forefront of advocacy