Our light-hearted Thinking Allowed column looks at cohabitation, the feudal mentality and the shrinking roti canai.

With cohabitation among couples becoming a social phenomenon, the institution of marriage appears to be under threat.  Divorce rates around the country are galloping.  Incompatibility and irreconcilable differences are reasons cited.

Talking of infidelity, it would have started when more than one man and one woman appeared on the planet.  In Shakespeare’s Othello, Desdemona’s friend has this to say:

“But I do think it is their husband’s faults

If wives do fall, Say that they slack their duties

And pour our treasures into foreign laps.”

Remember Tun Ling telling Malaysians that extra-marital affairs are all right as long as one does not get caught.  Soi Lek obviously did not heed his advice when he was caught with his pants down!

Lately, some marriages have been in the news – a Sultan’s wife came out into the open and claimed unfair treatment by the Sultan’s first wife; a Tunku took the Islamic yamin istizhar oath to compel his estranged wife to be loyal and return money owed to him; a datuk’s wife in her divorce petition claimed that he had slept with ten women while still married to her, and then there was the news about a crude, sexist MP marrying another wife – good luck to her.

Terengganu has come out with novel ideas to stem the tide of increasing divorce rates in the state – couples are encouraged to bathe together to increase their libido and testestrone levels! Also the state is prepared to finance holidays for couples whose marriages are on the rocks.  Of course, couples wanting a free holiday can always fake marital problems.  Obviously, men with more than one wife can get free multiple holidays.

In Kelantan, a lawmaker has made a call to reward MPs and Assemblymen who marry widows, divorcees and abandoned single mothers.  The state can keep the money because our aging Tan Sris and Datuks have always shown a healthy appetite for innocent and ignorant young models and actresses.

I spoke to my feminist friend, a fatalist, about Terengganu’s holiday plans for quarelling couples and her response was: “What God has put asunder, let no men put together”.

At meetings, the VIP sits on a larger and more comfortable chair than those flanking him or her.  Of course, after independence, our glittrati kept their suits, neckties, Bally shoes and bush jackets.  The red carpet and guard-of-honour are vestiges of colonialism.  However, they are essential components of the pomp and pagentry with which our VIPs are welcomed.  Did I hear someone say that we should shed our colonial mentality?

Did anyone care when the size of ‘roti canai’ shrank to ‘puri’ size?  Now a very caring and concerned government claims that the sugar price hike is to control obesity and diabetes among Malaysians.  Again an assurance has been given that restaurants and coffee shops would not raise the price of drinks but businessmen being businessmen will probably resort to using smaller cups for coffee and tea and smaller glasses for fruit juices!  Did I hear someone say that price hikes will not burden the people?

Justice was never won without personal sacrifice – whether measured in time volunteered, energy devoted to a cause, or financial support generously given. We need your support in our struggle for justice. Your contribution no matter how small will be like a droplet that builds up into a wave of change. Click here if you would like to contribute financially 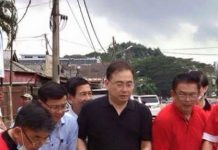 ‘YB, serve the people’: What do Malaysians want, and why?