The controversy surrounding Chin Peng’s return to Malaysia is not coming to an end yet.  First it was the Court’s decision and then the Government’s decision that Chin Peng should not be allowed to return to his homeland.  But a certain group, it seems, is fighting for his return.

I am one of the victims of the communist’s terrorism of the fifties.  My father’s house and his sister’s were razed to ashes by the communist terrorists, simply because my father was a penghulu and deemed by the communists to be on the side of the government.  But what about my aunt?  Probably being the penghulu’s sister was reason enough to burn her house as well.  That was the depth of the communists callousness.

But a few years ago, I happened to read Chin Peng’s memoir.  I cannot but conclude that Chin Peng was a freedom fighter, ranking with Tok Bahaman, Mat Kilau, Tok Gajah of Pahang and Tok Janggut of Kelantan who fought the British colonialists.  The difference was Chin Peng chose the wrong path both in political philosophy and its modus operandi to force the British out of the country.  It was not acceptable to the Muslim populace as well as the Chinese capitalists in this country.

Tok Bahaman, Mat Kilau, Tok Gajah and Tok Janggut were dubbed “traitors” by the British and Chin Peng and his followers were dubbed “terrorists”.  But he was a freedom fighter just like Ho Chi Minh, who fought and defeated first, the French, and then the Americans, in Vietnam.  The world hailed ‘Uncle Ho’ as a hero.

While Chin Peng, towards the end of the Emergency years decided to settle in Thailand, Musa Ahmad (the Chairman of MCP) and Shamsiah Pakeh decided to settle in Beijing.  By British accounts, Shamsiah Pakeh was a terrorist attached to the 10th Regiment in the jungle of Pahang. She was an illusive and influential communist who could disappear within seconds of sighting her. She was shot many times but escaped unscathed.  She was rumoured to be invincible. She was a terrorist feared by the armed forces and a reward was put on her head, dead or alive.

I happened to read Shamsiah Pakeh’s memoir too.  By her account, she was never a terrorist.Throughout her jungle days in Pahang, she was never armed, nor did she harm anybody.  Her responsibility was recruiting cadres for the women’s wing of the MCP.  But her alleged “terrorism” was so much spoken about, that we boys in Temerloh, Pahang, knew her name well, along with other communists like Wan Ali (Kuala Lipis), Manaf Jepun (Temerloh), Abdullah C D and many others.

But despite her alleged “terrorism”, why was Shamsiah Pakeh and Musa Ahmad allowed to return to this country?  What’s the difference between them and Chin Peng in the communist hierarchy?  Musa Ahmad was the Chairman of MCP and Chin Peng was the Secretary-General.  All of them applied to return on humanitarian grounds: to spend their last days in the country of their birth.

What can Chin Peng do at his age? Furthermore, what can a man of Chin Peng’s age do to revive the MCP? And if there is an iota of evidence against him, detain him under the obnoxious ISA.  Is not the ISA a potent political weapon of the BN government?.

Yes, a particular group may say the return of Chin Peng may revive the memory of bitter fighting with the communists.  What more for those who are still alive and who have been incapacitated by the loss of sight and limb, or the loss of loved ones.

But why single out Chin Peng?  Did not the Japanese soldiers who came to invade Malaya in 1942 commit untold atrocities, plundering, raping and killing innocent people including women and children?  How many innocent civilians were beheaded, tortured and killed?  How many civilians got their tongues cut off and their limbs severed?  How many of our parents and their parents had their education interrupted because of the Occupation?  And how many of us lost our grandparents at the death railway in Siam?

We have lost our loved ones too during the Emergency years.  But think of it, were they not incidents of war, that happen everywhere in the world whenever there is war.  Those killed by the communists were mostly members of the Armed Forces who were deemed to protect the British government’s interests, the very government they were fighting against.  Apart from the existing Armed Forces, the British made a special recruitment of the Special Constable (SC), whose main responsility was to protect the British rubber estates.  They were the British government’s operatives for all intents and purposes and the communists saw them as tools and collaborators of the imperialists.

Should not Chin Peng be forgiven?

Yes, the communists occasionally destroyed our railway system and water supply which caused a lot of inconvenience and loss of revenue.  But all of us know in war, work of sabotage is part of war games.  The communists too suffered death through hunger, when the government decided to cut off their food supplies by settling all the isolated villagers into controlled areas now known as “New Villages”.  But we cannot say that depriving the communists of sustenance was in violation of human rights, because the country was in a state of war.  But once the war is over, all should be forgotten and forgiven.  Should not Chin Peng be forgiven?

Dato Hishamuddin Bin Haji Yahaya, DIMP, SAP, is a laywer and one time MP for Temerloh. 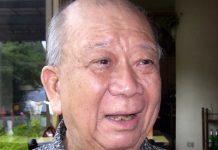 Who is to blame for our soldiers’ deaths? Baling Peace Talks revisited

Perak MB should walk the talk