How could the Penang state government under the BN sell the Kampong Buah Pala land when “the available evidence seemed to show that the land is still vested in the Federal Lands Commissioner”, wonders a bewildered P Ramakrishnan.

Negative elements – greed, corruption, abuse of power and judicial indifference – have conspired to wipe out part of Penang’s history and destroy its heritage.

But we in Malaysia do not attach as much affection and concern for our history and heritage. There was a time when we even considered getting rid of the Merdeka Stadium to make way for commercial projects.

Merdeka Stadium is best remembered as the place where our beloved first Prime Minister, Tunku Abdul Rahman, declared this nation’s independence. It represents so many memories and so much history but that meant nothing to human avarice. Thank God it did not take off but the point is we were even prepared to commit this sacrilege!

Then there was an attempt to shift the well-known St Michael’s Institution in Ipoh somewhere else just because it was in the middle of a fast growing township. But St Michael’s was there long before so-called development caught up with it. Thank God it did not take place!

But Bukit Bintang Girls’ School in Kuala Lumpur was not that fortunate. This famous school, which was a landmark in the history of our education, had produced so many brilliant students and leaders but that notable achievement did not spare it. It eventually lost to development and greed. It was demolished to make way for commercial purposes. Though the school was shifted elsewhere, they made sure that its history would not continue. They got rid of that famous name: BBGS. They did not even bother to retain the old name of the school to honour its history and contribution to our education.

I’m sure there are numerous other examples of indifference and sacrilege.

But the latest example to wipe out history and a legacy that goes back nearly 200 years and make way for greed and corruption is taking place in the Pearl of Orient: Penang’s version of High Chaparral is facing extinction within a matter of weeks.

How did the Penang govt acquire the land?

Much has been written about the history of this community that has been occupying this parcel of land which has been home to more than five generations of descendants. Therefore it is unnecessary to dwell on this.

What I’m interested in is how this land was acquired by the Penang Government Officers Cooperative – Koperasi Pegawai Kerajaan Pulau Pinang. How was the cooperative able to obtain this parcel of land below market value? Did the officers who were influential and closely linked to the Barisan Nasional Government and Umno just help themselves to it with the blessings of the Penang state government? After all it was Umno that was effectively running the government and who would have dared to question it or oppose whatever that was done by the Umno Exco Members?

Did the land actually belong to the Penang state for these officers to grab it on behalf of their cooperative?

It is a mystery why the BN government deprived these poor Kampung Buah Pala residents of their land by passing this Act of Parliament. The BN with its majority simply took over this land – nay, it just robbed them of their land.

A repeat of the Nizar case

That being the case, how was this land transferred to the cooperative? There appears to be a fraudulent transfer of land which is a very serious matter. Why did the Court of Appeal and the Federal Court totally ignore this vital point when the residents turned to these courts for justice?

It is significant to note that the High Court Judge had ruled that the villagers and the residents of Kampong Buah Pala have a claim to this land.

In a well-argued judgment, Justice O’ Hara had clearly established that there are points to be tried before the courts and there are issues for the courts to weigh and consider before arriving at the truth as to the ownership of the land.

In upholding the decision of the Deputy Registrar (DR), Justice O’ Hara referred to the DR’s ruling, “There is no evidence before this court that the land in question had reverted back to the state under the operation of the old Article 84. The ownership of the land when it was purportedly alienated to the 2nd defendant – Koperasi Pegawai Kerajaan Negeri Pulau Pinang – is an important issue to be considered and for that reason I am not prepared to grant summary judgment as sought by the 2nd and 3rd defendants.”

The Court of Appeal totally ignored the valid points raised by the High Court and, without any legally established basis, ruled in favour of the defendants in setting aside the High Court ruling.

This decision seemed to be a repeat of Nizar’s case in which the High Court in a sound judgment had ruled that Nizar was the legitimate Menteri Besar of Perak at all material times. But the one-man Appeal Court set aside this finding without any written judgment. This scandalous situation was re-enacted in the case of the Kampung Buah Pala case.

In both cases the Federal Court was a total disappointment. In the Buah Pala case, it ruled that the plaintiff had no locus standi. How could this be so when the residents of Buah Pala can trace their ancestry to more than five generations!

It is this vital and critical point that has to be addressed. Whose land is it? Does it belong to Penang?  If so, what is the evidence and where is it?

If “the available evidence seemed to show that the land is still vested in the Federal Lands Commissioner, regardless of whether the Commissioner is aware of that fact” as contended by the Deputy Registrar, how could this transaction have taken place? 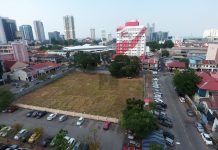